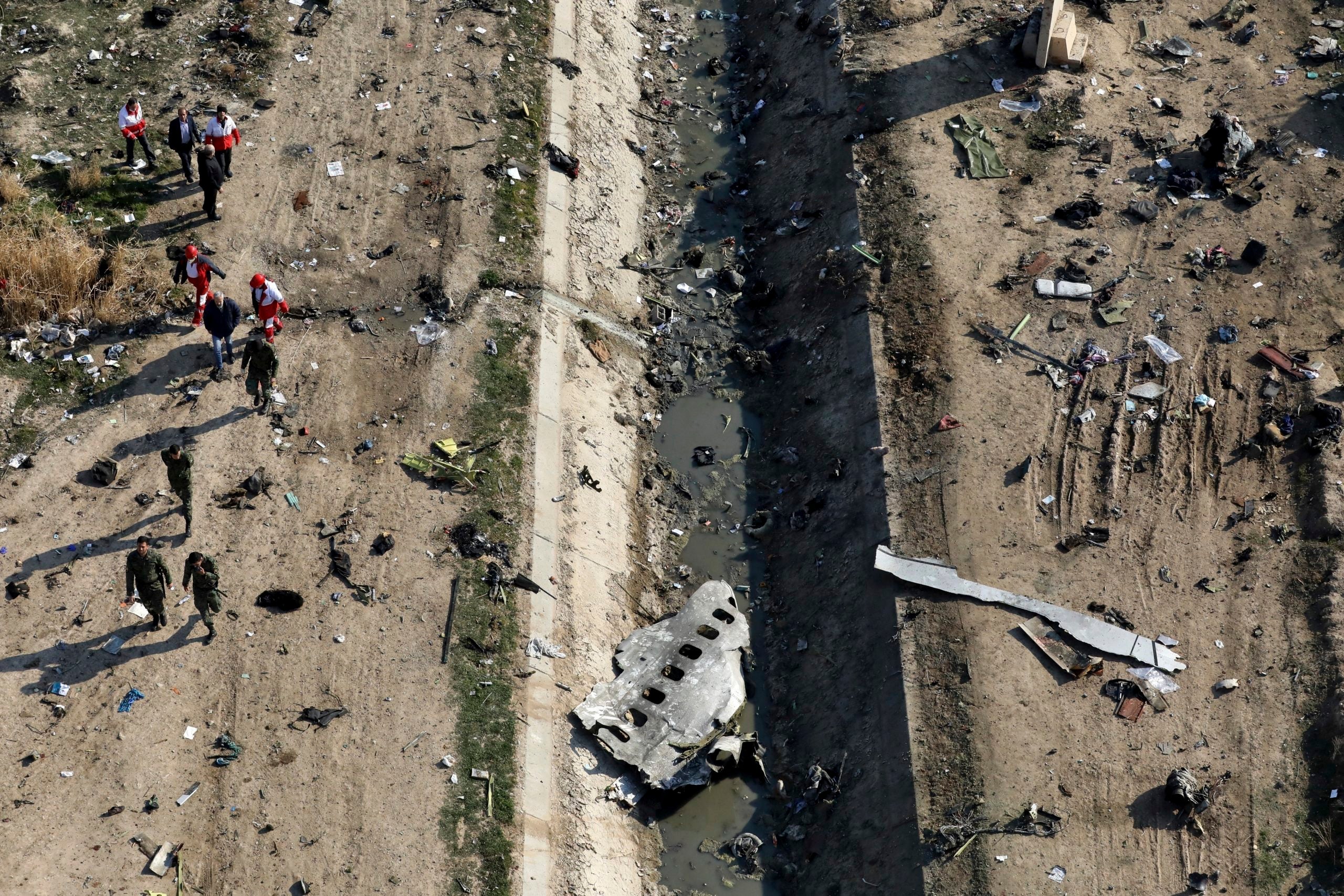 FILE – In this Jan. 8, 2020 file photo, rescue workers search the scene where a Ukrainian plane crashed in Shahedshahr, southwest of Tehran, Iran. Iranian investigators are blaming a misaligned missile battery and miscommunication between soldiers and their commanders for the Revolutionary Guard shooting down the Ukrainian jetliner in January, killing 176 people. The report released late Saturday, July 11, 2020 by Iran’s Civil Aviation Organization comes months after the crash. (AP Photo/Ebrahim Noroozi, File)

TEHRAN, Iran — A misaligned missile battery, miscommunication between troops and their commanders, and a decision to fire without authorization all led to Iran’s Revolutionary Guard shooting down a Ukrainian jetliner in January, killing all 176 people on board, a new report says.

The report may signal a new phase in the investigation into the crash, as the aircraft’s black box flight recorder is due to be sent to Paris, where international investigators will finally be able to examine it.

At the time, Iranian troops were bracing for a U.S. counterstrike and appear to have mistaken the plane for a missile. The civil aviation report does not acknowledge that only saying a change in the “alertness level of Iran’s air defense” allowed previously scheduled air traffic to resume.

The report detailed a series of moments where the shootdown of Ukraine International Airlines Flight 752 could have been avoided.

The report said the surface-to-air missile battery that targeted the Boeing 737-800 had been relocated and was not properly reoriented.

Those manning the missile battery could not communicate with their command center, they misidentified the civilian flight as a threat and opened fire twice without getting approval from ranking officials, the report said.

“If each had not arisen, the aircraft would not have been targeted,” the report said.

Western intelligence officials and analysts believe Iran shot down the aircraft with a Russian-made Tor system, known to NATO as the SA-15. In 2007, Iran took the delivery of 29 Tor M1 units from Russia under a contract worth an estimated $700 million. The system is mounted on a tracked vehicle and carries radar and a pack of eight missiles.

The report did not say why the Guard moved the air defense system, though that area near the airport is believed to be home to both regular military and bases of the paramilitary Guard.

The report notes that the Ukrainian flight had done nothing out of the ordinary up until the missile launch, with its transponder and other data being broadcast.

“At the time of firing the first missile, the aircraft was flying at a normal altitude and trajectory,” the report said.

The plane had just taken off from Imam Khomeini International Airport when the first missile exploded, possibly damaging its radio equipment, the report said. The second missile likely directly struck the aircraft, as videos that night show the plane exploding into a ball of fire before crashing into a playground and farmland on the outskirts of Tehran.

The report put the blame entirely on the crew of the missile battery. Already, six people believed to be involved in the incident have been arrested, judiciary spokesman Gholamhossein Esmaili reportedly said in June. He said at the time three had been released on bail while the other three remained held.

In recent months, Iran has repeatedly delayed releasing the aircraft’s so-called black box, which includes data and communications from the cockpit leading up to the shootdown. The U.S., under international regulations, has a right to be part of the investigation as the plane involved was a Boeing.

Iran is to send the black box to France on July 20, where Ukrainian and French experts are expected to examine it, Iran’s state-run IRNA news agency recently reported. Iranian officials did not have the equipment on hand to read data from the box.

The plane, en route to the Ukrainian capital of Kyiv, was carrying 167 passengers and nine crew members from several countries, including 82 Iranians, 57 Canadians — including many Iranians with dual citizenship — and 11 Ukrainians, according to officials. The route was popular with those traveling onward to Canada.