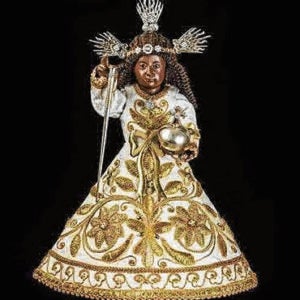 MANILA, Philippines — Fire investigators are still clueless about what happened to the venerated icon of the Child Jesus, locally called the Santo Niño, which has been missing since Friday when the Santo. Niño de Pandacan Parish church in Manila was razed by a fire that reached the third alarm.

Neither have fire investigators determined the cause of the fire that left many antique religious images heavily charred, pews destroyed, and the church’s roof and convent destroyed.

Capt. Guillermo Firmalino, investigation chief of the Manila Fire District (MFD), said on Saturday that they had yet to locate the wooden statue, which 17th century children supposedly found while playing at the site where the church was eventually built.

Firmalino said the fire likely originated on the second floor of the church where the image was also enshrined in a chapel.

Manila Mayor Francisco “Isko Moreno” Domagoso, a devotee of the Sto. Niño since he was a child, visited the Pandacan church on Saturday morning and said the “city will extend assistance to cleaning the rubble and the main objective is to find the Sto. Niño.”

The icon was first found even before Pandacan, originally part of the parish of Sampaloc, was established as a separate parish in 1712.

The church itself, built to house the icon, was constructed over 30 years and was completed in 1760. Through the centuries, however, the church was twice destroyed by earthquakes and the modern church and the parochial school stand on the ruins.

The icon has always been the center of the Buling-Buling dance festival, which is held on the feast day of the Santo Niño every January.

“[The Santo Niño] has been a legacy for 400 years, an image that has been valued and venerated by Pandacan residents,” Fr. Ricardo Valencia said.

There have been several reports that the Santo Niño has performed miracles, from healing the sick to saving the town from disasters.

In 1911, when a fire broke out near Pandacan, a priest placed the Santo Niño on the window facing the flames. The wind reportedly changed direction and saved the neighborhood from the blaze.

Despite the destruction of the church, Valencia said Masses would continue at the church grounds as scheduled. Fr. Sanny de Claro, parish priest, is set to celebrate Mass on Sunday.