Results of a Social Weather Stations (SWS) survey released Saturday show that 56 percent of Filipinos said the decision of the House committee on legislative franchises to disapprove a fresh 25-year franchise for ABS-CBN is an attack against press freedom.

However, 27 percent of the 1,555 Filipino respondents to surveys conducted from July 3 to July 6 think the rejection of ABS-CBN’s franchise application is not a jab at the freedom of the press.

On the other hand, 15 percent are undecided on the issue, according to the SWS survey. 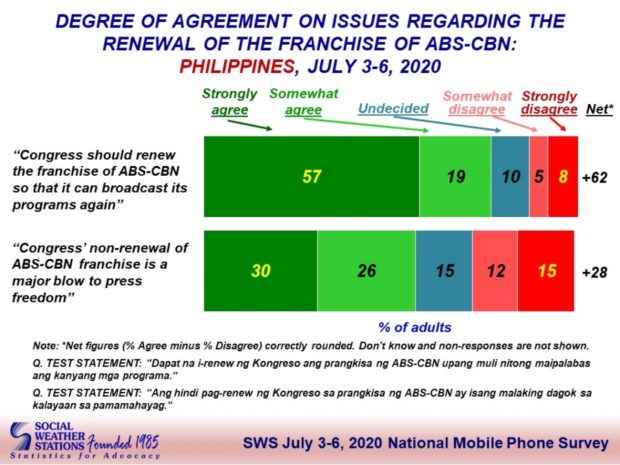 SWS said it applied a “probability-based” survey, which was carried out through mobile phone and computer-assisted telephone interviewing (CATI), amid restricted movements among Filipinos due to prevailing COVID-19 pandemic.

SWS noted that it gathered data through “mobile phone interviews from a database of mobile phone numbers compiled from SWS national and subnational representative face-to-face surveys since 2017.”

Participants in the survey were Filipinos aged 18 years old and above. Of the 1,555, 306 are from the National Capital Region, 451 from Balance Luzon, 388 from the Visayas, and 410 from Mindanao.

Also, SWS said the survey has sampling error margins of ±2% for national percentages, ±6% for Metro Manila, and ±5 for Balance Luzon, ±5% Visayas and ±5% in Mindanao.

The poll was conducted while public hearings on the broadcasting network’s franchise application were ongoing at the House of Representatives.