Dutch government to take Russia to European court over MH17 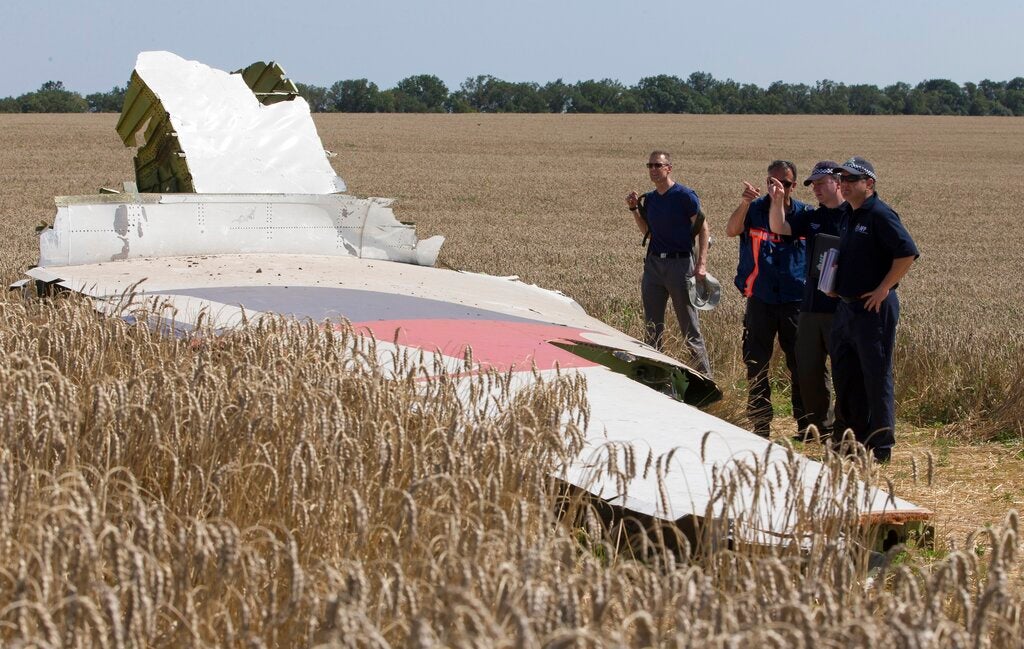 In this Aug. 1, 2014 file photo, Australian and Dutch investigators examine a piece of the Malaysia Airlines Flight 17 plane, near the village of Hrabove, Donetsk region, eastern Ukraine. (AP)

THE HAGUE, Netherlands  — The Dutch government is taking Russia to the European Court of Human Rights for its alleged role in the shooting down of Malaysia Airlines Flight 17 over eastern Ukraine six years ago, the foreign minister announced Friday.

The move is intended to support individual cases being brought to the European court by relatives of some of the 298 people who were killed when a Buk surface-to-air missile fired from territory controlled by pro-Moscow Ukrainian rebels blew the Amsterdam-to-Kuala Lumpur flight out of the sky on July 17, 2014.

“Achieving justice for 298 victims of the downing of Flight MH17 is and will remain the government’s highest priority,” Foreign Minister Stef Blok said. “By taking this step today … we are moving closer to this goal.”

By launching the case against Russia, the Dutch authorities can share evidence with the Strasbourg-based European court so it can be considered in individual relatives’ cases.

“As a government, we have information, evidence, that leads us to the conclusion of the involvement of the Russian Federation,” Blok told The Associated Press. “Of course, the relatives themselves do not have all this information so we can help them by starting this procedure.”

Moscow has repeatedly denied involvement in the downing of the Boeing 777. Foreign Ministry spokeswoman Maria Zakharova said Russia sees Friday’s announcement “in connection with the disaster of the Malaysian Boeing as another blow to Russian-Dutch relations.”

Throughout the case, the Netherlands has acted “exclusively within the framework of anti-Russian logic, to which both technical and criminal investigations were subordinated,” Zakharova said.

However, an international team of prosecutors investigating the case has, however, charged three Russians and a Ukrainian with involvement in bringing down the plane and the murder of all on board. The men are on trial in a Dutch court, although none have been extradited to the Netherlands to face justice.

Blok said much of the evidence the government will submit to the human rights court also is part of that criminal case.

Prosecutors say they have evidence the missile that blew MH17 out of the sky was trucked into Ukraine from a Russian military base and the mobile launcher was later returned to Russia.

The Russian foreign ministry didn’t immediately react. Konstantin Kosachev, head of the foreign affairs committee in the upper house of Russia’s parliament, called the Dutch move “a strange initiative from every aspect” in remarks carried by the Interfax news agency.

“The investigation isn’t over yet, there have been no court verdicts on the national level yet and, finally, what does the European Court for Human Rights have to do with it?” Kosachev said.

Friday’s move is the latest legal maneuver by the Dutch government, which has long vowed to secure justice for victims and their loved ones. Separately, the government is pursuing Russia for state responsibility in the downing.

“The government attaches importance to continuing the meetings with Russia on the matter of state responsibility,” the foreign ministry said in a statement. “The purpose of these meetings is to find a solution that does justice to the enormous suffering and damage caused by the downing of Flight MH17.”

Blok said the twin legal tracks are headed toward the same goal.

“From the onset, we have made clear that the downing of an airplane, civilian airplane, and 298 innocent casualties is such a severe breach of international law that we will pursue any venue to find the truth and bring justice to the relatives,” he said.