Cuevas runs rings around the prosecution 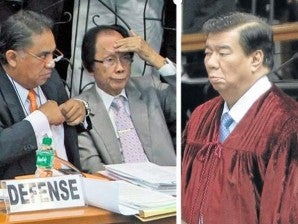 TOUGHING IT OUT Defense lawyers Jose Roy III and lead counsel Serafin Cuevas react during the impeachment trial at the Senate on Wednesday. At right is Senator-Judge Franklin Drilon. RAFFY LERMA

Was it a case of the defense being too good, or the prosecution has got it all wrong?

For the second day in a row, Chief Justice Renato Corona’s powerhouse team of defense lawyers appeared to have gotten the better of prosecutors from the House of Representatives, including the crack team of private lawyers assisting them.

Only on Tuesday, the prosecutors led by Representative Niel Tupas Jr. drew flak for supposedly committing a couple of strategic blunders during the televised impeachment trial.

“Handa sa press con, hindi sa trial (Prepared at press conferences but not at the trial)” was a popular comment circulating online, in reference to the perceived debacle of the prosecution when it admitted it was not ready to present evidence during the Tuesday hearing.

Wednesday’s hearing, the longest so far, was not necessarily a different story.

The experience of Cuevas, 83, as a longtime litigator and a former member of the Supreme Court was on full display early on in the hearing when the prosecution called its first witness.

At one point, Cuevas even objected to a question by one of the senator-judges, Franklin Drilon, saying “the question is hypothetical.”

An apologetic Cuevas said: “I’m sorry, your honor. I thought we were allowed to go that far … because apparently the question tends to elicit an answer for the prosecution.”

Senate President Juan Ponce Enrile, the presiding officer, reminded Cuevas that senator-judges could pose questions to the witness or counsels. “This is a new forum for lawyers, so we understand,” he said.

Tupas’ inexperience as a trial lawyer seemed obvious. Enrile appeared irritated when the congressman sought to clarify whether he was “asking the counsel for the defense to advise our witness.”

“Not your witness … but to advise the respondent,” Enrile told him. “I think the gentleman knows the meaning of the word ‘respondent.’”

Cuevas went to work when Bautista began asking Vidal about Corona’s statements of assets, liabilities and net worth (SALNs) filed in her office.

Going by the objections sustained by the presiding officer, the defense appeared to have gotten the upper hand.

Enrile repeatedly told Bautista to “reform your question,” as in the counsel’s question to Vidal: “Is it possible that you may not be aware if a particular SALN has been filed or not?”

Objecting, Cuevas said: “Again, the question calls for an opinion.”

To which Enrile ruled: “That’s a hypothetical question. Reform the question.”

Enrile seemed to lose his cool when Bautista began posing what appeared to be hostile questions to Vidal, the prosecution’s own witness.

“You cannot impeach your own witness,” Enrile told the prosecutor.

Bautista’s very first move during the examination was corrected by Enrile in response to an objection by the defense.

The private lawyer apparently failed to “state the purpose” for which Vidal was on the witness stand, and instead went directly to his question.

Enrile had to remind Bautista that the rules of court were applicable in the trial, and that he should explain the presence of the witness.

Later in the day, the prosecution recovered after Senator Judge Franklin Drilon questioned Vidal if she had the SALN documents with her.