BRASÍLIA — Brazilian President Jair Bolsonaro, who has tested positive for COVID-19, said on Facebook Thursday that he was “very well” and again advocated the use of the controversial drug hydroxychloroquine. 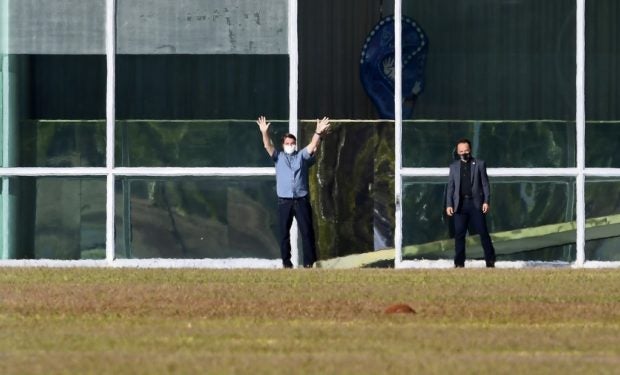 Brazilian President Jair Bolsonaro waves outside Alvorada Palace in Brasilia on July 9, 2020. Bolsonaro tested positive for the coronavirus after months of downplaying the dangers of the disease. Photo by EVARISTO SA / AFP

Bolsonaro, 65, appeared in his weekly Facebook Live post at his official residence. He appeared to be in good shape and was not accompanied, as is often the case, by ministers or senior officials, and the usual sign language interpreter was not present.

Since the beginning of the crisis, the far-right president has dismissed the seriousness of the epidemic and criticized containment measures ordered by governors in Brazilian states.

Bolsonaro said that after feeling unwell at the end of last week, he had started taking one hydroxychloroquine tablet every day.

The drug, originally tested to fight malaria, has been pushed as a treatment for COVID-19 in many countries — but its effectiveness has not been formally proven and the issue is deeply dividing the global scientific community.

“I’m saying this very clearly,” Bolsonaro said in his video.

“I took (hydroxychloroquine) and it worked, and I’m fine, thank God. And let those who criticize it at least offer an alternative.”

He did, however, deny making “propaganda for hydroxychloroquine.”

Brazil is currently the second country hardest-hit country in the world by the pandemic, behind the United States.