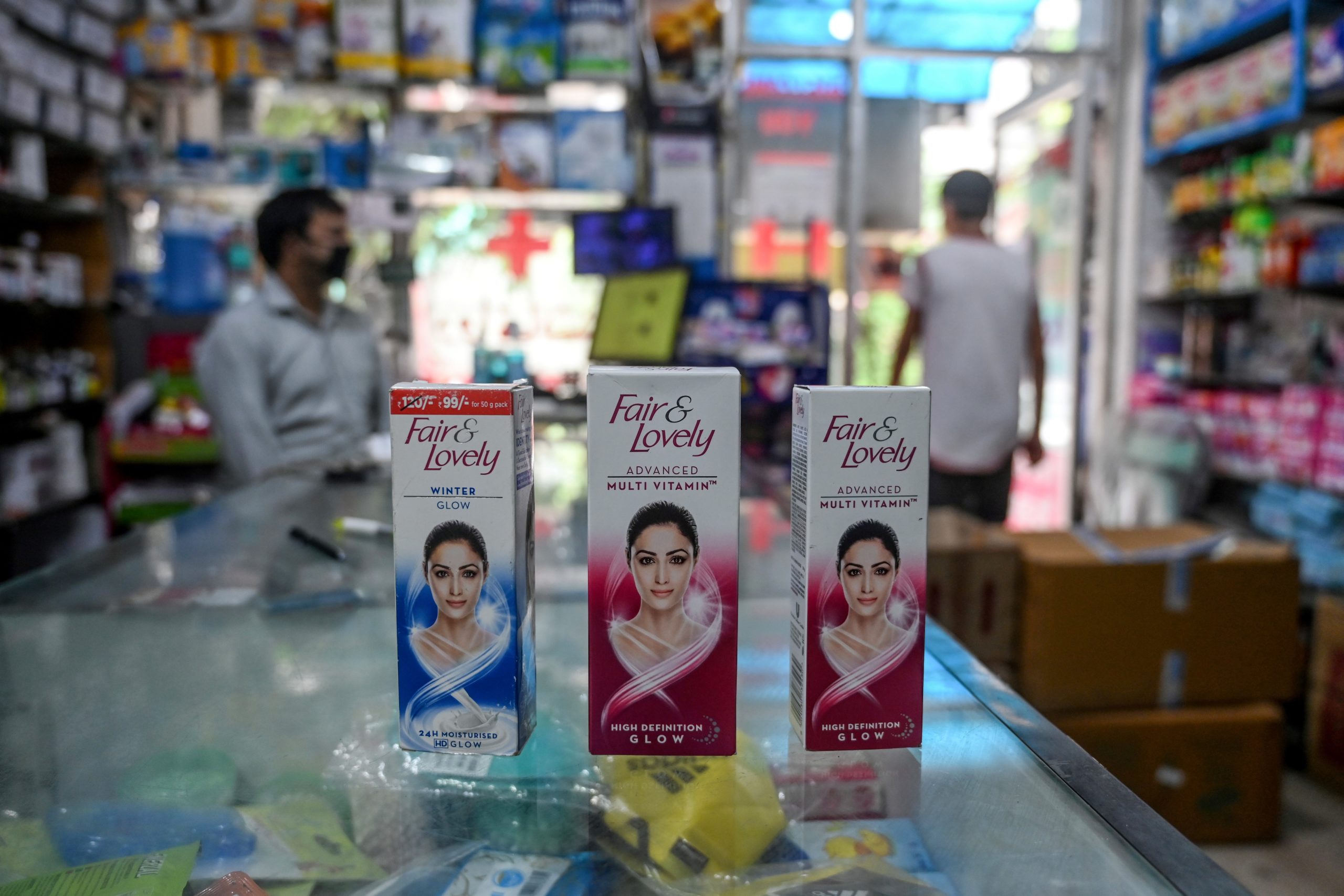 This photo taken on July 8, 2020, shows packages of Unilever “Fair and Lovely” skin-lightening creams on the counter of a shop in New Delhi. – Multinationals have long profited from sales of whitening creams, face wash, and even vaginal bleaching lotions, by advertising the message that beauty, success, and love are only for pale-skinned people. Now, companies like Unilever say they “want to lead the celebration of a more diverse portrayal of beauty”. (Photo by Sajjad HUSSAIN / AFP)

NEW DELHI — When Chandana Hiran was a child, strangers would urge her to lighten her skin. Today the Indian student is leading a campaign against whitening creams as global anti-racism protests highlight the obsession with fair complexions for many in Asia.

“They have been thriving on selling insecurities to women,” 22-year-old Hiran, who launched an online petition against Fair & Lovely, told AFP.

“The narrative is that if you are dark-skinned, you cannot achieve anything in life. So being a dark-skinned girl I’ve always felt that maybe… I need to be fair. If I’m not, then maybe I don’t deserve those things.”

Multinationals have long profited from sales of whitening creams, facewash, and even vaginal bleaching lotions, by advertising the message that beauty, success, and love are only for pale-skinned people.

Unilever made $500 million from Fair & Lovely sales in India last year, according to Bloomberg.

Now, after mounting outrage sparked by the Black Lives Matter protests in Western cities, companies like Unilever say they “want to lead the celebration of a more diverse portrayal of beauty”.

But campaigners warn their fight has just begun and that, without greater efforts to counter entrenched bias against darker skin, the rebranding remains superficial.

Colorism —  prejudice against darker skin tones — in India is pervasive.

“The assumption is the higher castes are fairer than the lower castes,” sociologist Suparna Kar of Bangalore’s Christ University told AFP.

As a result, many associate pale skin with wealth and beauty — a prejudice bolstered by Bollywood films which rarely make darker-complexioned women the star and frequently portray successful city-dwellers as fair-skinned.

Actress Tannishtha Chatterjee, long vocal about colorism, told AFP: “When I have been cast in urban roles, a make-up artist would come and tell me that it’s an ‘upmarket’ role, so ‘should I make the skin tone two shades lighter?'”

The bias begins at birth, said Kavitha Emmanuel, who visits schools promoting her “Dark is Beautiful” campaign launched in 2009.

The prejudice shows up in school textbooks, she said, with a dark-skinned person used to denote “ugliness”.

Seema, a 29-year-old domestic worker in New Delhi, has used Fair & Lovely since she was 14. Most of her female relatives use it — including her 12-year-old daughter.

“When I look at the fairness-cream commercials it looks like a good product… they show that when people become fairer, they get jobs, they get proposals for marriage,” she told AFP.

The obsession is also widespread in Southeast Asia.

“Having a whiter skin is seen as… part of what is euphemistically called (a) ‘pleasing personality’,” University of the Philippines’ medical anthropologist Gideon Lasco told AFP.

Such prejudices have exposed generations to self-loathing and low self-esteem, experts say.

On top of the psychological damage, the products pose significant health risks.

Some contain hazardous levels of mercury, which can cause kidney damage, skin ailments, and psychosis, the World Health Organization warns.

In Indonesia, the pursuit of “white skin” has led to the sale of toxic, unregulated products, prompting a government crackdown.

But activists say it will take time to alter such ingrained biases, especially when the sector is so profitable.

The skin-lightening industry is one of the world’s fastest-growing beauty segments and is forecast to be worth $31.2 billion by 2024, according to the WHO.

In India, a nation of 1.3 billion people, whitening products make up about half the skincare market.

But change is coming, said campaigner Emmanuel, who believes future generations will see the world — and themselves — differently.

Her recent visit to a school ended with a lighter-skinned student apologizing to classmates for bullying them over their darker complexions, Emmanuel said.

“For me, that was a moment… I realize it is having an impact.”