LJUBLJANA, Slovenia – The US artist behind a wooden statue of Melania Trump in Slovenia said Thursday that he was mulling an “artistic response” after his work was burned down at the weekend. 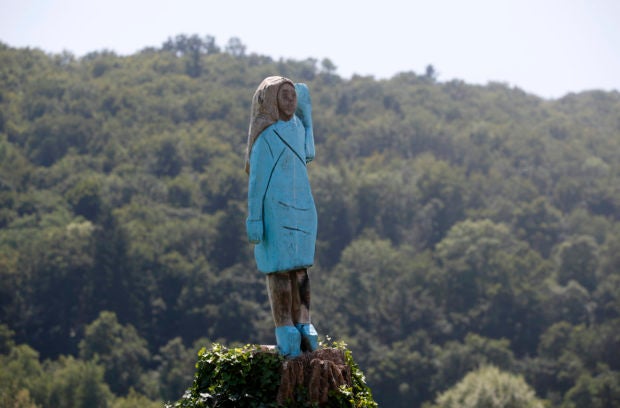 In this Friday, July 5, 2019 photo, a sculpture created by American artist Brad Downey depicting Melania Trump is seen in her hometown in Sevnica, Slovenia. A life-size sculpture of the U.S. first lady has been unveiled in her hometown of Sevnica, drawing mixed reactions from the locals. (AP Photo/Miro Majcen)

American conceptual artist Brad Downey erected the life-sized statue near the US First Lady’s hometown of Sevnica a year ago as part of a project aimed at exploring her roots.

But the statue sparked mixed reactions. While some saw it as an effective parody, others said it looked like a scarecrow and should be removed.

Slovenian police said they were now probing the July 5 burning down of the statue.

Downey, who coincidentally was in Slovenia when the statue was set on fire, managed to rush to Sevnica and remove it before pictures of the damaged sculpture went viral.

“I would not like pictures of the horrific burnt face to become a ‘meme’,” the 40-year-old artist told AFP, dismissing media speculation that he himself had burned it down as part of his project.

He said the attack may have been linked to the July 4 .US Independence Day celebrations.

“I think I should make an artistic reply… I’m hoping to,” Downey added, but declined to give further details.

The statue had been inaugurated on July 5 last year after Downey commissioned local artisan Ales Zupevc, also known as “Maxi”, to carve the sculpture into a tree using a chainsaw.

Another wooden statue — of US President Donald Trump himself — in a village north of the capital Ljubljana was burned down by suspected vandals in January.

That statue was named “statue of liberty” by architect Tomaz Schlegl who wanted it to serve as a criticism of populist politics.