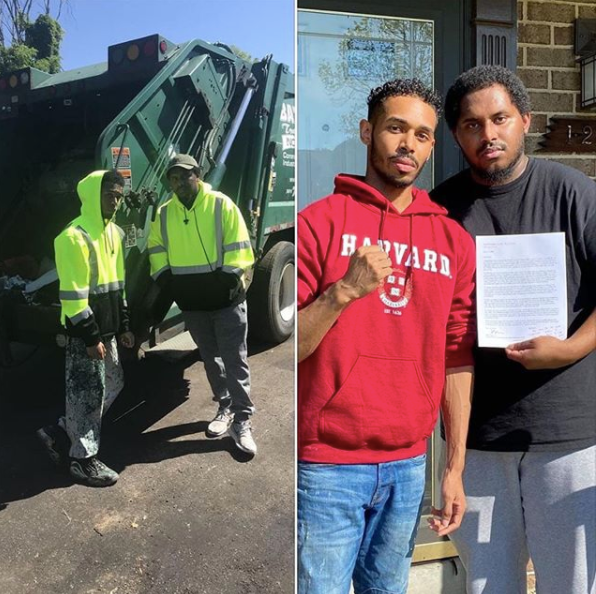 Rehan Staton (left in both pictures) and his brother Reggie (Image: Instagram/@rehanstaton)

A man from Maryland in the United States who held a job as a sanitation worker has been accepted into Harvard Law School.

Rehan Staton, 24, was previously rejected from several colleges he had applied to for his undergraduate studies, CBS News reported yesterday, July 8. After finally enrolling in college in 2014, he wound up giving the commencement speech in 2018.

He was brought up by his dad, who singlehandedly raised him and his brother Reggie after their mom left them when Rehan was 8. His father worked three jobs to make ends meet.

Academics was not always Rehan’s strength. When he was in 7th grade, a teacher suggested he go into special education, he told CBS News. A tutor helped him with his school work for free and he got on the honor roll.

He was also an athlete in high school, specializing in martial arts and boxing. However, an injury affected his shot at college.

“It ruined the chances of me turning professional in sports. So, that being said, when applying to college, I got denied by every single one,” he recalled.

Rehan decided to get a job to help his father out with expenses. He worked at Bates Trucking & Trash Removal and was surprised to find a community that supported him in his pursuit of his dreams.

Most of his coworkers were previously incarcerated, and pushed Rehan to apply to college again.

“It was the people that were on the bottom of the hierarchy who really lifted me up,” he said.

Rehan eventually enrolled in Bowie State University in 2014 and transferred to the University of Maryland in 2016.

He still kept his job as a sanitation worker and would go to work in the morning before classes, he told NBC Washington on June 29.

“I would have to sit on the side of class and try not to bother anybody with my scent that day,” he was quoted in the report.

His brother also decided to drop out of college and work so that Rehan could pursue his studies.

While in the University of Maryland, he decided he wanted to practice law. He took the LSAT and applied to nine schools. At the insistence of his cousin, he filmed his reactions to getting law school admission decisions, which he posted on YouTube last June 29.

Rehan shared in the video that he nearly pushed back on his studies after he got into an accident, but it was his brother who encouraged him to keep going and even got him a Harvard sweatshirt. Rehan was beside Reggie when he found out he got into Harvard, as seen in the 5:18 mark.

He expressed gratitude to his brother in an Instagram post last June 27, stating that Reggie’s sacrifice to drop out of school “is the only reason I’m going to Harvard Law School this fall.
This wouldn’t have been possible without you.”

Rehan said he plans to give free LSAT tutoring to help others get into their dream schools, as per NBC Washington.

“Throughout this time, people kind of ask me, ‘How did you do it?’” he told CBS News.

“It’s more so how could I not do it when everyone is breaking their backs for me, and pushing for me to win.” Niña V. Guno /ra