Domestic workers among few Hong Kongers who will miss TikTok

HONG KONG — TikTok’s exit from Hong Kong was met with a shrug among many locals who distrust the Chinese social media platform, but the app had been embraced by many foreign domestic workers as a way to creatively escape the drudgery of their toil. 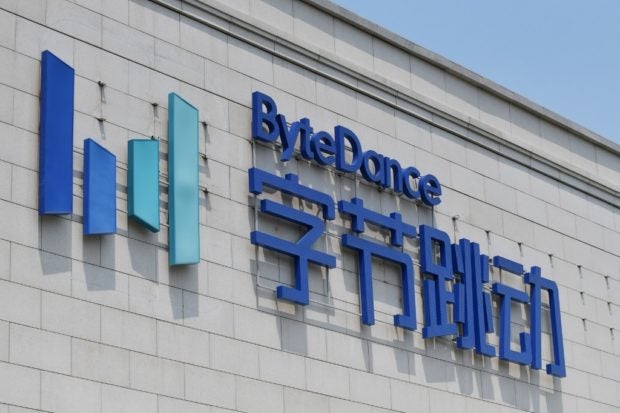 The ByteDance logo is seen on the ByteDance headquarters building in Beijing on July 8, 2020. Video sharing app TikTok, which is owned by Chinese company ByteDance, announced on July 6 it was pulling out of Hong Kong, less than a week after a new national security law went into effect. Photo by GREG BAKER / AFP

The globally popular video-sharing app was used by many of the city’s 370,000 foreign helpers, as they are commonly known in the finance hub.

In between cooking, cleaning and childcare duties in Hong Kong’s cramped family homes they filmed creative, witty and sometimes scathing insights into their daily lives.

But this week TikTok, owned by China’s ByteDance, said it would no longer work in Hong Kong after a new security law imposed by Beijing gave authorities sweeping powers to police local users.

Joane, a domestic worker from the Philippines, said she was “a bit sad” to see the app go.

“It also helped me release some stress,” she told AFP.

“Being away from family, financial problems, stress from work” are among the challenges faced by helpers in the city, she said, adding that the app’s popularity had taken off since the coronavirus pandemic meant workers like her were often stuck at home.

Poorly paid domestic workers, primarily from the Philippines and Indonesia, are the cogs that keep Hong Kong’s economic engine running, enabling both parents of a family to hold down full-time jobs in the notoriously expensive city.

Domestic workers must live with their employers in Hong Kong’s tiny flats, are only entitled to one day off a week and often grapple with stressful work environments.

“When (your) employer makes you…  non-stop do this and do that and do this and so on,” reads the text in a video Joane posted in May.

So popular is TikTok among women like Joane that the hashtag #ofwhk — “overseas foreign worker Hong Kong” — has been viewed nearly 12 million times on the platform.

Local recruitment specialist Mirian Sim said she began using the app herself to communicate with and recruit migrant workers when she noticed how big its user base had become.

“I started using it as a way to bond with our existing helpers, to spread positive vibes and information for them,” said Sim, whose agency Garford describes itself as an “ethical employment agency” that specialises in hiring Filipino helpers.

But enthusiasm for the platform from foreign workers — and teenagers around the world — stands in stark contrast to the rest of Hong Kong.

By comparison, Facebook currently has 5.6 million local users and Instagram has 2.6 million, according to analytics company NapoleonCat.

In a city rocked by anti-Beijing sentiment, few trust ByteDance’s repeated assurances that it does not share any user information with Chinese authorities.

Online forums used by Hong Kong democracy protesters have long advised people against downloading it, echoing security fears raised by the US government.

Joane said domestic workers could ultimately live without the app.

“We find TikTok very entertaining, but I know even if TikTok will be pulled out of Hong Kong, a lot of Filipino domestic workers can still manage,” she said.

“We always find ways to entertain ourselves.”