SEOUL — A South Korean court ordered Pyongyang’s leader Kim Jong Un to compensate two former prisoners of war who spent decades as forced laborers in the North, in a move that could set a far-reaching legal precedent on the divided peninsula. 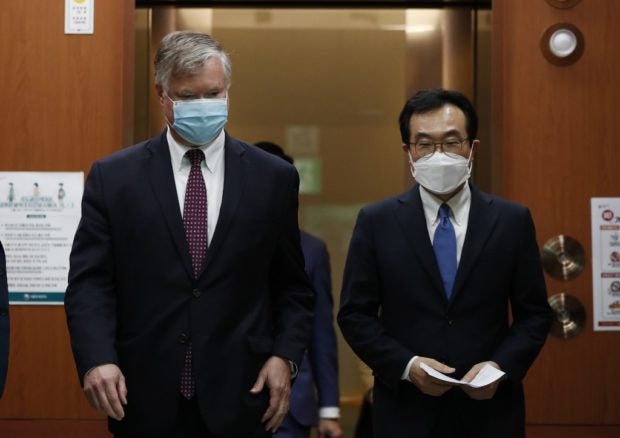 US Deputy Secretary of State Stephen Biegun walks with his South Korean counterpart Lee Do-hoon after their meeting at the Foreign Ministry in Seoul on July 8, 2020. Biegun is to discuss “allied cooperation” on the “final, fully verified denuclearization” of North Korea, among other issues, during his meetings with officials in Seoul and Tokyo this week, according to the US State Department. Photo by KIM HONG-JI / POOL / AFP)

The ruling was the first time a South Korean court claimed jurisdiction over Pyongyang or issued a compensation order against its leader, according to a campaign group backing the plaintiffs.

The two men — one surnamed Han, 87, and the other Ro, 90 — say they were captured during the 1950-53 Korean War, but were never repatriated after the armistice that brought hostilities to a close.

Instead, they say they were forced to work at coal mines and other facilities for decades until they escaped the North via China. Ro returned to the South in 2000, and Han a year later.

They filed the suit in 2016, saying they had suffered “enormous mental and physical damage” in the North.

The Seoul Central District Court on Tuesday ordered the North and leader Kim to pay each of them 21 million won ($17,500), a court spokeswoman told AFP.

Following the ruling, a civic group supporting the two said they would take legal steps to seize North Korean assets under Seoul’s control, such as copyright fees for Pyongyang’s state TV.

By the end of the war, there were 170,000 North Korean and Chinese prisoners in the US-led UN forces’ POW camps, while 100,000 South Korean and UN troops were held in the North, according to data by the War Memorial of Korea in Seoul.

Pyongyang repatriated only 8,343 South Koreans after the armistice, according to the Seoul government.

The South has since raised the issue many times, but the North maintained no former soldiers from the South were being held against their will.

Civic groups say some 80 South Korean POWs escaped the North and returned to the South in 2000 and 2001.

“This is a milestone ruling,” said lawyer Koo Chung-seo, adding it paved the way for further legal action by other individuals against Kim and his regime.

Inter-Korean relations have been in a deep freeze following the collapse of a summit in Hanoi between Kim and US President Donald Trump early last year over what the nuclear-armed North would be willing to give up in exchange for a loosening of sanctions.