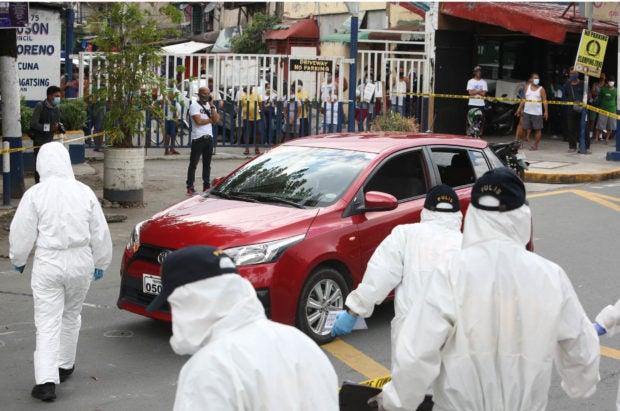 DAYLIGHT ATTACK Police investigators in white protective gear approach the car where Manila’s Chief Inquest Prosecutor Jovencio Senados was shot dead on his way to work in a daring daylight attack on Tuesday by unknown assailants in a black SUV along Quirino Avenue. —MARIANNE BERMUDEZ

MANILA, Philippines — The inquest division chief of the Manila City Prosecutor’s Office was killed on his way to work in a hail of bullets that ripped through his car on Tuesday, police said.

Jovencio Senados, 62, who was being driven from his home in Calamba City, Laguna province, died outright from multiple bullet wounds inside his vehicle on Quirino Avenue around 11 a.m.

The inquest prosecutor was sitting beside his driver, Feljie Bagares, his nephew. Bagares was unharmed but complained that his ears hurt from the loud gunfire.

Senados was the 50th victim of deadly attacks on lawyers, prosecutors and judges under the Duterte administration, according to the National Union of Peoples’ Lawyers (NUPL).

Justice Secretary Menardo Guevarra ordered the National Bureau of Investigation to “immediately step in and investigate this horrible murder.”

“We are shocked by the audacity of this attack. It highlights once again the grave peril that our prosecutors face each day in the discharge of their duties,” he said.

“We will avail [ourselves] of all the resources of the Department of Justice to obtain justice,” he said.

“The claims to ‘peace and order’ and purported ‘rule of law’ once again fly in the prevailing culture of violence and climate of impunity engendered by official hate speech and penchant for vindictiveness,” he added.

A video of the incident captured by a closed-circuit television (CCTV) camera showed that Senados’ car was forced to slow down after a red Innova that had cut into his lane decelerated near Quirino and Anakbayan even though there were no other vehicles at that intersection then.

As this happened, a black sport utility vehicle (SUV) coming from the right lane moved alongside Senados’ car.

The assailant, who was on the backseat behind the SUV driver, fired at Senados, shattering his car window, according to Police Capt. Henry Navarro, the chief of the homicide section of the Manila Police District (MPD).

Navarro said that the slain fiscal did not mention any death threats to his nephew.

The black Montero SUV with plate No. AVG 8133 and the red Innova then sped away.

Lt. Col. Carlo Manuel, the public information officer of the MPD, said investigators were checking other CCTV footage to track down the two vehicles.

Lt. Col. Ariel Caramoan, commander of MPD Station 5, said investigators found shells at the scene that suggested that a high-powered firearm was used in the attack.

Navarro noted that the assailants were “very swift in the execution” of the ambush and were possibly trained in using high-powered firearms.

While the motive for the killing has yet to be established, MPD chief Brig. Gen. Rolando Miranda said investigators were taking into account Senados’ job.

“Whatever the motive and whoever the perpetrators should be credibly established. This is absolutely unacceptable in a supposed civilized and democratic society,” Olalia said.

In his role as chief inquest prosecutor, Senados advocated the release of those arrested for alleged quarantine violations.

Olalia said Senados also had approved the release for further investigation of the 20 protesters arrested during last month’s Pride march near Malacañang.

Among the cases handled by Senados that made news was the murder of Masbate Vice Mayor Charlie Yuson III at an eatery in Sampaloc, Manila, in October 2019. He ordered the release of the four alleged gunmen a day after their arrest for “further investigation.” The release was condemned by the family of the victim.

Senados later explained in an interview with Radyo Inquirer that the information filed against the suspects did not have the elements of murder and that the witnesses made conflicting testimonies.

He also handled the case against Paul Biteng, who allegedly hacked the website of the Commission on Elections (Comelec) in April 2016 and faced charges of illegal access, data interference and misuse of device.

Senados told the Inquirer at the time that the attack on a “critical infrastructure” like the Comelec would draw a penalty one degree higher, and that Biteg, then 20, could face a maximum 60 years in prison.

He also ordered the further investigation of the cases of resisting arrest, direct assault and obstruction of justice filed by the MPD against expelled Iglesia ni Cristo worker Lowell Menorca II and his bodyguard Felixberto Eslava in 2016.

Senados said Menorca’s resistance was understandable because the officers were not in uniform.

On March 20 this year, Senados released more than 20 people arrested for violating Manila’s

8 p.m.-5 a.m. curfew, saying many of them were either homeless, vendors or people who needed to go to work.

He said they should have been released immediately as they were charged with only a minor offense.