Bus in China plunges into a lake, killing 21 | Inquirer News

Bus in China plunges into a lake, killing 21 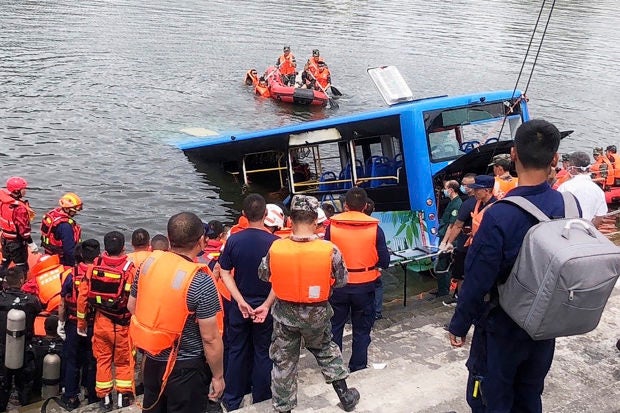 In this photo released by Xinhua News Agency, rescuers watch as a bus that fell into a lake is recovered in the Xixiu District of Anshun, southwestern China’s Guizhou Province, Tuesday, July 7, 2020. Authorities say dozens were killed Tuesday when a bus ran through a roadside fence and plunged into a lake in the southwestern Chinese city. (Long Rui/Xinhua via AP)

BEIJING — Authorities said 21 people were killed Tuesday when a bus ran through a roadside fence and plunged into a lake in a southwestern Chinese city.

Surveillance video posted by state broadcaster CCTV on its social media account shows the bus suddenly race across six lanes of traffic and through the fence. The cause of the accident was unclear.

The Anshun city government in Guizhou province said in a statement that 15 people were rescued and sent to hospitals with injuries. The bus was hauled out of Hongshan Lake in a large rescue operation.