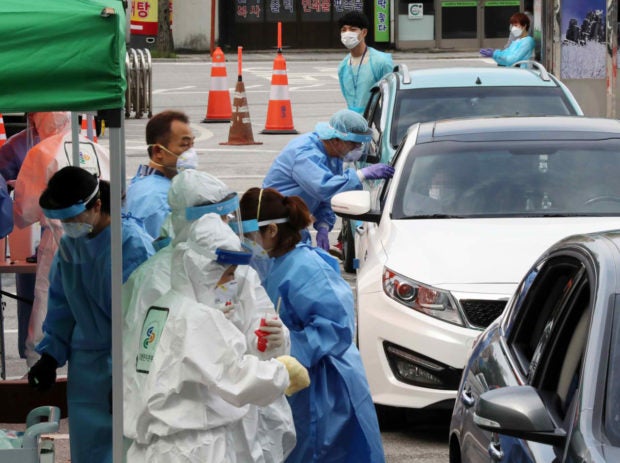 SEOUL — The novel coronavirus spreading in South Korea now has its origin in Europe and the US, health authorities said Monday, and it is known to be six times as infectious as the original strain that emerged in China.

The variant belongs to the GH clade, which has largely been circulated in Europe and the US, according to an analysis by Korea Centers for Disease Control and Prevention on 526 genome samples diagnosed with the COVID-19.

This implies the virus could have arrived here via someone who came from those regions in March and April before Korea tightened virus controls on overseas arrivals, mandating a two-week quarantine for all.

“As we interpret it, the virus belonging to the GH clade is circulating recently because we had many arrivals from Europe and the US in March and April, and the virus imported then is now driving community transmissions,” Korea Centers for Disease Control and Prevention Director Jeong Eun-kyeong, at a briefing Monday.

The variant of the GH group was first found in cases in early April registered in North Gyeongsang Province, cases traced to bars and clubs in Itaewon, Seoul’s party district, in early May as well as cases linked to a Buddhist temple in Gwangju, most recently, according to Jeong.

The variants found in the genome samples in February and March, when the country saw hundreds of cases linked to a church in Daegu and hospital in neighboring North Gyeongsang Province at the peak of the COVID-19 outbreak here, belonged to the S clade and V clade. The virus in the S and V clades were prevalent in China, where the coronavirus is believed to have originated from, and other parts of Asia.

The G vibrant, which is dominating COVID-19 cases globally, is three to six times more capable of infecting human cells, according to a study published Thursday in the scientific journal Cell.

Touching on another study result on the possibility of airborne spread of the COVID-19, Jeong said more research is necessary but key measures to fight the virus stays the same regardless of how the virus spreads, calling on the public to stick to the basic rules such as avoiding enclosed, populated environments, wearing masks and washing hands.

In an open letter to be published this week, some 239 scientists from 32 countries suggests that aerosol transmission of the COVID-19 could be more important than the WHO has acknowledged, called on governments around the globe to take control measures.

On Monday, Korea reported 48 more COVID-19 cases as the country continues to see small-scale outbreaks, infections coming from overseas as well as an increasing number of cases with unidentified routes of transmission.

Half of the new cases, 24, were locally transmitted and the other half were imported. Of the locally transmitted cases, seven were registered in Gwangju in connection with a previously identified Buddhist temple cluster. Five cases were reported in Gyeonggi Province, five in Incheon, two each in South Jeolla Province, Daejeon and Seoul, according to the KCDC.

Seven more people tested positive for the coronavirus in connection with the temple in Gwangju, bringing the number of related total infections to 87.

Of the total cases reported in the past week, infection routes for 10.7 percent of the cases remain unidentified, Jeong said, adding “quiet transmission” among those in their 50s or over is taking place in the community.

Korea reported 24 additional imported cases, 21 of them were from Asia and three from the Americas. Some 15 people detected at the airport quarantine screening and the rest while under quarantine after they entered the country from abroad.

Out of the country’s total 13,137 cases, 11,848 people, or about 90.2 percent, were released from quarantine after making full recoveries. Some 1,005 people remain under quarantine.

One more patient died, bringing the death toll to 284. The overall fatality rate stands at 2.16 percent.