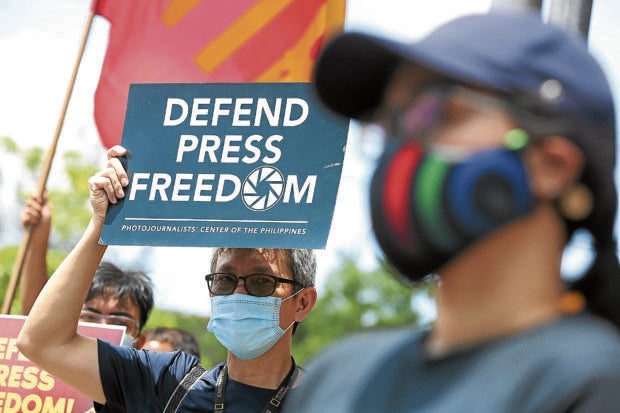 ASSEMBLY Supporters, employees and talents of ABS-CBN stage a march from the Commission on Human Rights to the House of Representatives in Quezon City, as they protest other related issues being raised against the Duterte administration. —NIÑO JESUS ORBETA

MANILA, Philippines — Four petitions were filed on Monday asking the Supreme Court to nullify the Anti-Terrorism Act of 2020 that President Rodrigo Duterte signed on Friday, on the grounds that the law would undermine constitutional rights.

One after another, the groups of petitioners trooped to the Supreme Court to have Republic Act No. 11479 declared unconstitutional. More petitions are expected to be filed after the law takes effect.

A group of lawyers and civic activists led by Howard Calleja and former Education Secretary Armin Luistro of the De La Salle Brothers filed their petition after submitting it by email on Saturday.

The fourth was filed by the 12-member Makabayan bloc of the House of Representatives led by Bayan Muna Rep. Carlos Zarate.

The petitions asked the Supreme Court to declare the new terror law unconstitutional “on its face,” or before its actual enforcement, for violating the constitutionally guaranteed rights to free speech and expression, due process of law and assembly.

The Makabayan petition included President Duterte as respondent despite his presidential immunity against lawsuit, while Lagman included the Senate and the House of Representatives for supposedly legislating an unconstitutional law.

But Malacañang said on Monday that laws passed by Congress had the “presumption of constitutionality.”

“Let the process move forward at the Supreme Court, although we can say that the [tribunal] respects the products of our elected lawmakers,” presidential spokesperson Harry Roque said.

Justice Secretary Menardo Guevarra welcomed the constitutional issues raised against the new law, saying a Supreme Court ruling would guide the Department of Justice and the ATC in preparing the law’s implementing rules and regulations.

—With reports from Julie M. Aurelio and Tina G. Santos