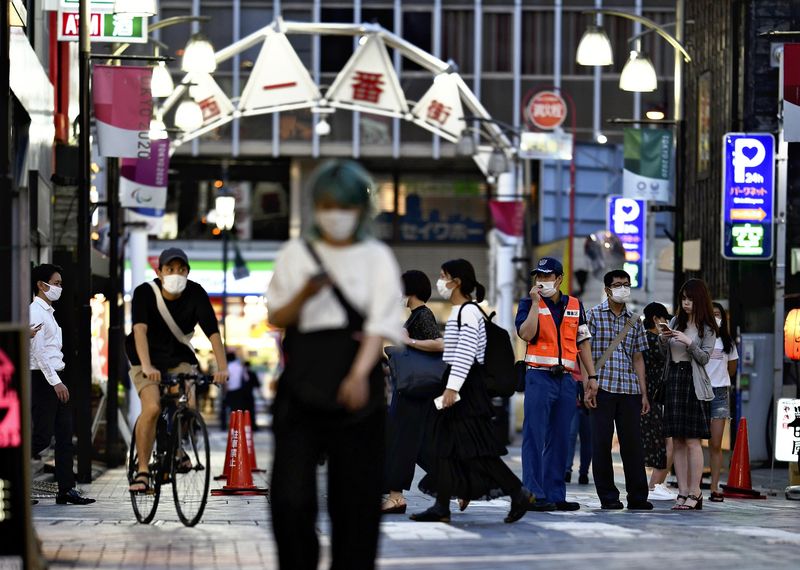 People are seen on a street in the downtown area of Toshima Ward, Tokyo, on Thursday. The Yomiuri Shimbun via The Japan News

TOKYO — Tokyo Gov. Yuriko Koike on Saturday asked Tokyo residents to refrain from nonessential travel to other prefectures, after the daily number of people infected with the new coronavirus exceeded 100 for the third consecutive day.

On the same day, the Tokyo metropolitan government announced that 131 people were confirmed to have been infected in Tokyo.

This is the first time since April 23-25 during the state of emergency. According to the Tokyo metropolitan government and others, 98 of the 131 cases were people in their 20s to 30s — three-quarters of the total.

The number of infected people associated with so-called nightlife districts, including employees and customers of restaurants that provide entertainment, was 62.

Of these, 52 were in Shinjuku Ward, where the infection is spreading in the downtown area. A total of 25 infection cases detected through mass testing at host clubs and other places are also included. In Arakawa Ward, 10 people became infected at facilities such as a nursing health care facility for the elderly. Six people each became infected in dining areas and in the workplace, bringing the total number of infected people to 6,654.

Koike told the media that she intends to strengthen support for PCR testing and other measures being carried out by municipalities in Tokyo. She said she would work with the government to consider financial support for the wards and municipalities. She also called for the promotion of telecommuting as well as refraining from nonessential travel to other prefectures.