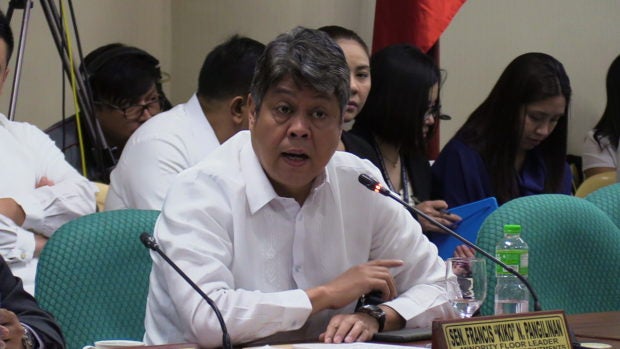 MANILA, Philippines — As the battle over the anti-terrorism law shifts to the Supreme Court, an opposition senator is calling on groups and individuals to “besiege” the tribunal with petitions to let it know that many Filipinos believe the law contravenes the Constitution.

Sen. Francis “Kiko” Pangilinan made the appeal a day after the first petition was filed in the high court to stop the enforcement of Republic Act No. 11479, or the Anti-Terrorism Act of 2020, which President Duterte signed on Friday.

The petitioners said the law contained provisions that were “repugnant” to the Constitution.

The President signed the measure amid mounting opposition over fears that it might be used to crack down on legitimate dissent and lead to violations of human rights.

Pangilinan, chair of the Senate committee on constitutional amendments, said he himself would question the enactment of the law in the high court.

“We have to exhaust all (legal) remedies. Whether we win or not is another thing altogether. But we have to fight,” he said in a radio interview.

Malacañang will leave it to the Supreme Court to decide on petitions challenging the constitutionality of the antiterrorism law. It would defer to the high court’s wisdom on the law, said presidential spokesperson Harry Roque.

“We can still do a lot… We can go to the Supreme Court because we believe there are unconstitutional provisions,” Robredo said in a television interview on Saturday. “We can also continue to engage Congress to repeal or amend the provisions that are not acceptable to us.”

Up to Supreme Court

In a statement, Albay Rep. Edcel Lagman said it was now up to the Supreme Court to rectify the constitutional infirmities of the law and to protect the people from having their civil liberties denied under the new law.

Lagman described some features of the law as “draconian,” among them a provision that would allow the arrest and detention of suspects for at most 24 days without warrant and charges, a six-month ransacking of bank accounts, and a 90-day surveillance and wire-tapping.

He also questioned vague provisions allowing law enforcers, the Anti-Terrorism Council and the Anti-Money Laundering Council to perpetrate abusive interpretations of the law and unlawful apprehensions.

The law removed the safeguard in the repealed Human Security Act that penalized erring officers with a P500,000 per day fine for each day someone spends in wrongful detention.

Any person who shall “threaten” to commit terrorism shall now suffer the penalty of 12 years in prison. The same prison term shall be meted against those who will “propose any terroristic acts or incite others to commit terrorism.”

Any person who shall “voluntarily and knowingly join any organization, association or group of persons knowing that such is a terrorist organization” shall also be imprisoned for 12 years.

The law states that terrorist acts “shall not include advocacy, protest, dissent, stoppage of work, industrial or mass action, and other similar exercises of civil and political rights.”

But it gives leeway to authorities, provided the acts are “not intended to cause death or serious physical harm to a person, to endanger a person’s life, or to create a serious risk to public safety.”

For detained Sen. Leila de Lima, the new law was akin to “giving a gun to a schoolyard bully,” as she supported Pangilinan in asking the magistrates “to protect our democracy and invalidate this legal abomination.”

“[This law], in the hands of Mr. Duterte, is just another weapon for his ‘lawfare’ against lawful dissent, political rivals and the rest of our countrymen demanding accountability for his misgovernance, injustices and treason,” she said in a handwritten dispatch.

“This scenario is not unfounded. In his four years in office, we have seen him use our laws to bully the opposition, journalists, activists and human rights defenders, and, yes, even major TV stations who dare speak truth to power,” De Lima said.

Pangilinan also raised concern over the remarks of National Security Adviser Hermogenes Esperon Jr., who said during an online news briefing that people need not fear the law if they were “silent.”

“So if one chooses not to remain silent and instead opts to speak out and criticize incompetence and corruption in this administration, we should be worried at being tagged as a terrorist?” the senator told the Inquirer in a Viber message.

Only Abu Sayyaf so far

Esperon on Sunday said that while the Anti-Terrorism Council was preparing a list of terrorists it still had only one group in mind.

In a text message on Sunday, he said “only the Abu Sayyaf group is proscribed so far,” referring to the required proscription by a court for the council to officially designate a terrorist organization.

“The New People’s Army (NPA) proscription process is still with the court,” he pointed out. The NPA is the armed wing of the Communist Party of the Philippines.

Esperon said it was within the rights of the people to question the law. “It is all part of a robust democracy.”

Armed Forces of the Philippines spokesperson, Maj. Gen Edgard Arevalo, dismissed as unfounded the claim that the new law was a form of militarization.

“That is not true because there is no provision in the law which gives more authority to the AFP,” he said on radio dzBB.

He also said dissent or peaceful assembly to seek redress of grievances was not considered terrorism.

The Commission on Human Rights has expressed reservations about the new law and underscored that it would hold the government to account on its commitment to uphold human rights. —WITH REPORTS FROM JULIE M. AURELIO AND JHESSET O. ENANO INQ