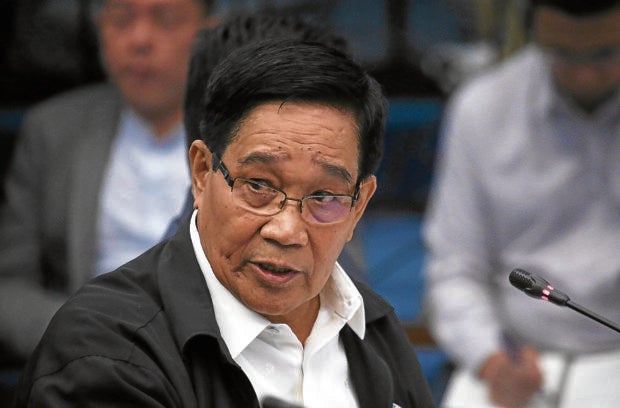 MANILA, Philippines — The initial groups and persons to be included in the government’s list of terrorists under the new anti-terrorism law will come from the United Nations, according to National Security Adviser Hermogenes Esperon.

Speaking at the Laging Handa briefing on Saturday, a day after President Rodrigo Duterte signed the Anti-Terrorism Act of 2020, or Republic Act 11479, Esperon said the Anti-Terrorism Council (ATC) would have to meet to ensure that all its members would have a “common understanding” of the law and then draft its implementation rules.

“The first thing we would do is look at what is in the list of the UN Security Council. We are following what the United Nations and the new UN Office for Counterterrorism have discovered,” he said.

“If there are organizations and names there that they know to be terrorists, we will put them in our list,” Esperon said.

The antiterrorism law states that the ATC will automatically adopt the UN Security Council Consolidated List of designated individuals and organizations designated or identified as a terrorist, or one who finances terrorism or a terrorist group.

The ATC may also designate groups or individuals, whether domestic or foreign, as terrorists upon a finding of probable cause that they committed or attempted to commit, or conspired in the commission of acts penalized under the antiterrorism law.

Esperon explained that after the designations, the justice secretary, one of the ATC members, would petition the Court of Appeals to declare organizations and persons belonging to these groups as terrorists.

He said that terrorist acts were not “ordinary killings or destruction of properties” but those whose purpose was “to intimidate the general public or cause disorder.”

The court could issue a preliminary approval of proscription declaring a person or group a terrorist, and hold hearings for up to six months before issuing a final ruling.

Surveillance of proscribed persons and groups, which could last a maximum 90 days, must have permission from the appeals court.

Esperon, a former military chief of staff, also said social media may be used as a basis for designating a terrorist.

“Use of social media as basis will be uncovered during surveillance which by itself must also have the permission of [the appeals] court,” he said in a text message to the Inquirer.

Arrests could be made after surveillance, and those making an arrest must have written authorization, Esperon said.

“They need to have training because not just anybody could conduct this arrest,” he said, adding that it was a “technical job.”

The arresting officer then has to report the arrest to the Commission on Human Rights (CHR) and the court, he said.

Esperon clarified that this was different from warrantless arrests which could be done even by civilians when a crime is taking place or had just taken place.

He told the Inquirer in another text message that even if most of the ATC members were involved in crafting the measure, meeting all of them was important so that “we all know the law as enacted” before drafting its implementation rules.

The ATC is tasked with implementing the law and formulating programs to tackle the conditions that contribute to the spread of terrorism and to prevent terrorist groups from carrying out their plans.

It is headed by the executive secretary and the national security adviser is vice chair.

The other members are the secretaries of foreign affairs, national defense, interior and local government, finance, justice, information and communications technology and the executive director of the Anti-Money Laundering Council (AMLC) secretariat.

The ATC’s duties include formulating plans, programs and counterterrorism measures; formulating and implementing a national plan to prevent and combat terrorism; and directing the speedy investigation and prosecution of all persons detained and accused of any offense under the antiterror law.

The ATC could also ask the AMLC to freeze and forfeit the funds of terror suspects, take action on requests from the United Nations and foreign groups to designate terrorist individuals or organizations, and investigate any report of abuse or improper implementation of the anti-terrorism law.

Esperon said the law was a “matter of necessity,” citing terror attacks and attempts in the country in previous years.

He warned that foreign terrorists were trying to establish a territory in Southeast Asia, particularly in Marawi City, which was devastated after a five-month siege by Islamic State-allied militants in 2017.

Esperon assured critics of the new law that it would not be used to stifle dissent.

The definition of terrorism excludes advocacy, protest, dissent, work stoppage, mass action and the like, he said.

“The ones afraid of it are the quiet ones who support terrorists and support armed struggle. They are the ones who are worried now because we will not allow their activities,” Esperon said.

“We assure the Filipino people that this law will never be a tool for oppression nor will it curtail the freedom of speech as it has safeguards against human rights violations and abuses on the part of law enforcers,” he said.

The law would give the authorities “the upper hand against communist terrorists and violent extremists,” Año said.

He added that the Department of the Interior and Local Government would “not allow this law to be abused and it will be used judiciously only for the purpose for which it was enacted—defeat the communist terrorists and violent extremists once and for all.”

Sen. Panfilo Lacson, a former national police chief and principal sponsor of the measure, said on Saturday that it would be “very costly” for law enforcers to abuse.

Citing one provision in the law, he said law enforcers who failed to notify the judge and the CHR of an arrest, and conducting technical surveillance or wiretapping without Court of Appeals authorization face 10 years in prison.

—With a report from Nestor Corrales