MANILA, Philippines — A group of lawyers and educators asked the Supreme Court on Saturday to stop the enforcement of the newly signed Anti-Terrorism Act, saying it contained provisions that were “repugnant” to the Constitution.

The 66-page petition for certiorari and prohibition was the first against the measure and filed via email a day after President Rodrigo Duterte signed the law.

They added that the implementation of the law “will materially and substantially prejudice basic constitutional rights” and may result in the “permanent contraction of civil and political liberties.”

The petition said the law “contains provisions that are repugnant and perilous to the constitutional rights of every citizen.”

The petitioners asked the Supreme Court to issue a temporary restraining order (TRO) against the law and eventually declare 11 sections null and void.

One of the law’s much-criticized provisions, Section 29, permits law enforcers to detain a suspected terrorist for up 24 days without charges.

“This is a positive development, as it provides all parties concerned the appropriate forum for the resolution of all the legal and constitutional issues involved, with finality,” he told reporters in a Viber message.

Guevarra was one of the eight members of the Anti-Terrorism Council (ATC) named as respondents.

The ATC is tasked with implementing the law and formulating plans to prevent terrorism and combat terrorist groups.  In a statement, Calleja said the law “has paved the way for a legal framework that would allow the government to go against its own people.”

He said the law strengthened the powers of the President by granting him judiciary powers, “making the Executive the judge, jury, and executioner.”

“This law is used by the government to weaponize itself for state-sponsored repression that makes a mockery of the rule of law. It is a law not against terrorists, but a law of error and terror,” he said.

Calleja is a noted litigation lawyer whose clients included former Autonomous Region in Muslim Mindanao Gov. Zaldy Ampatuan and Philrem Service Corp. which was implicated in the $81-million Bangladesh bank heist. He is also the legal counsel of the election watchdog Parish Pastoral Council for Responsible Voting.

The Calleja Law Firm said on its Facebook page that the physical copies of the petition would be submitted to the court on Monday.

“While threats to our national security need to be addressed, the law, as crafted, is oppressive and inconsistent with our Constitution, hence, the petition. This fight against terrorism should not and should never be a threat to the fundamental freedoms of all peaceful Filipinos,” Calleja’s law firm said.

The National Union of Peoples’ Lawyers (NUPL) on Saturday said it was preparing its own petition to challenge the law’s constitutionality.

NUPL president Edre Olalia said many people had expressed their “intense intention” to join their petition for a TRO or a preliminary injunction against the new law.

“At minimum [we will] essentially raise the following issues: propriety of remedies and judicial review; violations of due process, right to property, freedom of association, warrantless arrests and detentions without charges, right to bail and travel; and usurpation of judicial prerogatives,” Olalia said.

Small protests against the law were held in Laguna, Cavite and on the campus of the University of the Philippines (UP) Diliman by groups led by Bagong Alyansang Makabayan.

About 100 activists wearing protective face covers staged simultaneous indignation rallies against the law at Bacoor and Dasmariñas cities in Cavite and in Cabuyao and Sta. Rosa cities in Laguna at 4 p.m. 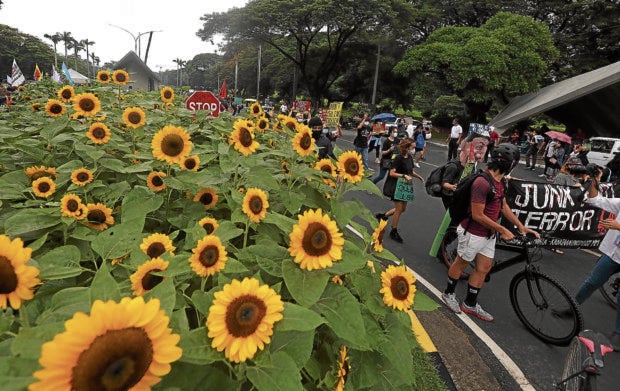 FLOWERING OF DISSENT The morning after President Duterte signed the Anti-Terrorism Act of 2020 into law, protesters regroup as they march past a patch of sunflowers on the main road leading to the University of the Philippines campus in Diliman, Quezon City, on Saturday. (Photo by MARIANNE BERMUDEZ / Philippine Daily Inquirer)

The police arrested 11 of the protesters as they were ending the rally.

Around 300 others, mostly youth activists in black and also wearing masks, held a protest at UP Diliman, some holding up placards saying, “When injustice becomes law, resistance becomes duty.”

The rally to mourn “the death of democracy” ended without incident.

Administration lawmaker Muntinlupa Rep. Ruffy Biazon reminded the country’s security forces to ensure that the new law would only be used against terrorists, and “with the highest regard for civil and political rights of law-abiding citizens.”

Biazon was among the original authors of the anti-terrorism bill in the House, but he subsequently voted against the measure after the committee that deliberated on it decided to adopt in its entirety the Senate version of the bill and refused to accept amendments from other congressmen.

Kabataan Rep. Sarah Jane Elago was disgusted over the President’s decision to sign the law while the country was still fighting the COVID-19 pandemic.

She called on the Filipino people to “build broader unities in this time of fear.”

“Let us stand together in the face of oppression and tyranny, and strongly dissent against all its forms which threaten the sanctity of our democracy,” Elago said.