President Rodrigo Duterte on Friday appealed to soldiers to stay calm, saying taking revenge against the police for the killing of four of their comrades in Jolo, Sulu, early this week would only do more harm than good for the country.

He urged the troops to “keep our silence” pending the results of the National Bureau of Investigation’s probe into the shooting of the soldiers by a group of Jolo police officers last Monday.

“Pending the release of the investigation of the NBI, we all must keep our silence,” the President said in a speech to soldiers on Friday night at the Edwin Andrews Air Base in Zamboanga City, which was broadcast live on government television.

“I come here asking, pleading with you to be calm, to keep the waters calm and we wait for the results of the investigation,” he said.

The President flew to Zamboanga City on Friday afternoon to meet separately with the nine policemen involved in the shooting, and the soldiers.

He said he could not stop soldiers who want to avenge their comrades, but warned that the country would not benefit from the violence.

“Go ahead. I cannot stop you. But also at the end of the day, just give me one answer. Did the country benefit from furthering the violence? I know you are mad, and you should be angry. I myself am angry at the situation,” the President said.

But he said killing policemen will not bring the slain Army soldiers back to life.

Mr. Duterte assured the troops that the policemen responsible would be prosecuted for the killing of the four Army intelligence agents, who were in the middle of a mission to capture an Abu Sayyaf bomb expert when they were shot.

“No one will interfere, only the truth. Whoever is guilty, then he has to pay for it,” he said. 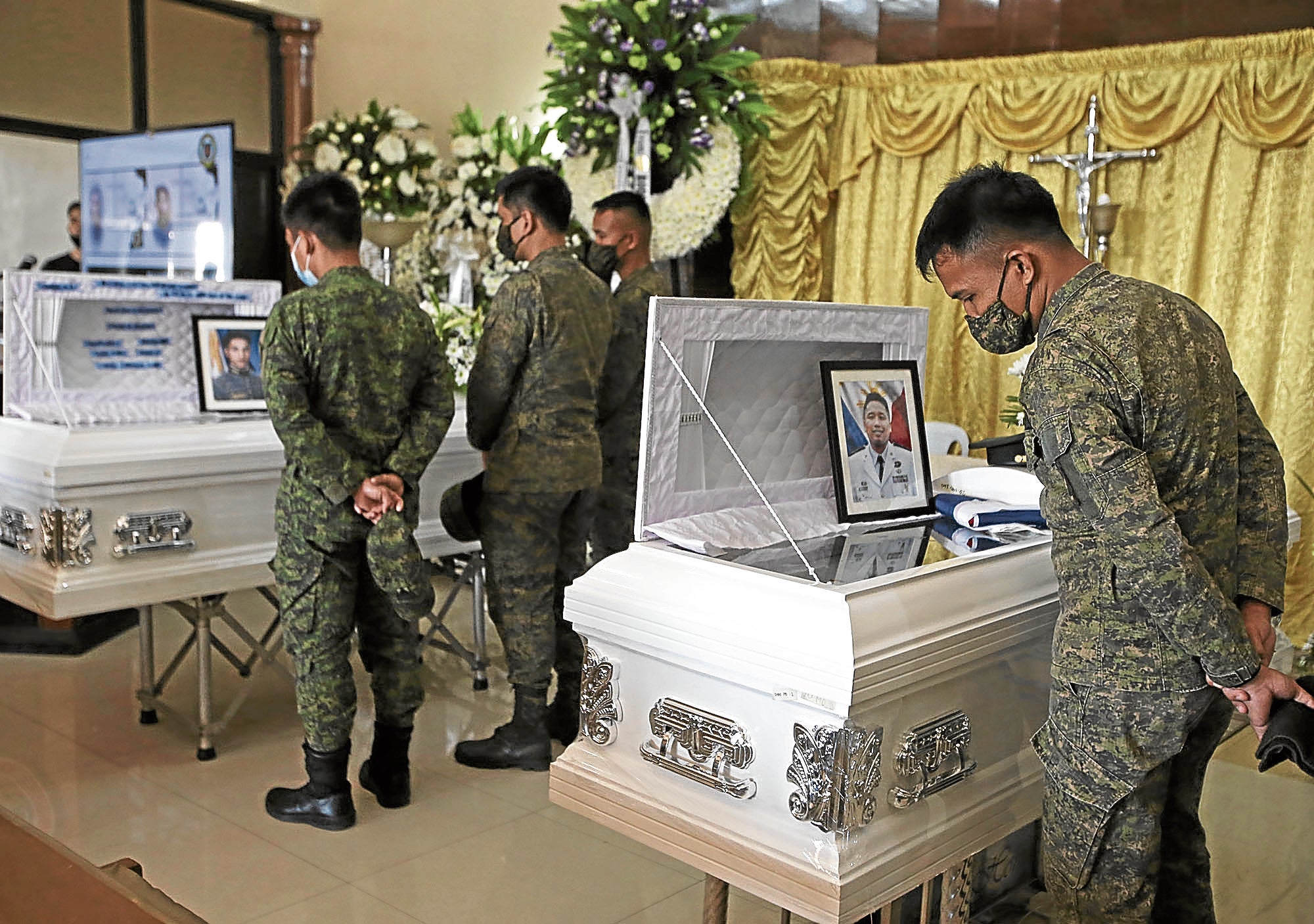 FAREWELL TO COMRADES Army soldiers pay their respects at the mortuary of Libingan ng mga Bayani to their comrades who were killed by a group of policemen in Jolo, Sulu, on Monday. President Duterte flew to Zamboanga to appease the anger of many in the military, promising that justice will be done and the truth will prevail. —RICHARD A. REYES

He admitted that the situation had generated “hatred and so much animosity” between the military and police, and that it would not do any good for the country since “it would be the people who will bear the brunt of these things.”

“Do not forget that there is a more important task to do and that is to protect the people,” he said. “Let us not lose sight of that reality.”

Before his speech, Mr. Duterte held a closed-door meeting with top officials of the Philippine National Police from the Zamboanga Peninsula region, including the police chiefs in Sulu and nearby provinces.

The President flew to Zamboanga City, “risking his life” to the new coronavirus just to lift the morale of both soldiers and policemen, his spokesperson said.

“That’s how important his mission is to him—to be one with the military and police, and assure justice—so that there won’t be any ill feelings among our government troops,” Harry Roque said in an online news briefing.

“The President is there to give an assurance that justice will be served, and punishment will be meted on the guilty because that is how the Duterte administration is,” he said.

“He is also there to lift the morale of the soldiers and policemen. He knows that if there was a mistake, it should be corrected. He will ensure that this will be the last incident of this kind under his administration,” Roque said.

Other officials on Friday played down any apprehension about tension or conflict between soldiers and police following the Jolo shooting on Monday.

As the country battles the COVID-19 pandemic and constant threats from Islamic State (IS)-affiliated extremist groups in the country’s south, they assured the public that the security forces were still working closely together.

Police Brig. Gen. Bernard Banac, the PNP spokesperson, earlier said the Jolo incident on Monday was a “misencounter” between the police and the intelligence team. Following a review of what happened, he said on Wednesday that it should have been called a “shooting incident.”

The NBI was ordered by the President to conduct an “impartial” investigation of what Army commander Lt. Gen. Gilbert Gapay called a murder and a rubout. Gapay, who was enraged by the manner he lost his men, said they were unarmed and the shooting was an unprovoked “carnage.”

Defense Secretary Delfin Lorenzana on Friday acknowledged a “slight tension” between the Armed Forces of the Philippines and the PNP due to the Jolo incident “because, you know, the other party was hurt.”

Interviewed in an early morning television show on GMA, Lorenzana said he already advised commanders of the police and the military to restrain their men from making comments that could fuel the tension between the PNP and the AFP.

“This is not a norm in the operations of these two big agencies,” said the official of the Department of the Interior and Local Government, which supervises the PNP. “Since the processes are in place, we will make sure this won’t happen again,” he said.

Indammog’s group was in a sport utility vehicle (SUV) returning to Jolo from nearby Patikul town when they were stopped at a checkpoint and told to proceed to the Jolo police station despite identifying themselves as Army soldiers.

Near the station, Indammog got out of the SUV for still unknown reasons. Moments later he was shot.

The police officers shot the three others and abandoned the area.

Maj. Gen. Corleto Vinluan Jr., commander of Joint Task Force Sulu, said Indammog’s team, which would have been backed by other troops, was on a mission to capture a long-wanted Abu Sayyaf bomb maker, Mundi Sawadjaan, and two newly trained female suicide bombers somewhere in Jolo that Monday afternoon.

The military said Sawadjaan was responsible for a series of deadly blasts that killed dozens of people last year, including the two bombings at the Jolo Cathedral in January 2019 which left more than 20 people dead and over 100 wounded.

Sawadjaan, who is in his early 30s, is a nephew of Abu Sayyaf subleader Hatid Hajan Sawadjaan, the alleged leader of the IS group in the Philippines.

Lorenzana said the hunt for the bombers would be continued by other military intelligence teams in Jolo.

“The guidance of the AFP Chief Gen. Felimon Santos Jr. to the troops: ‘Eyes on the ball,’” he added.

“It was just a matter of time before this police impunity, recognizing no boundaries, would claim as its latest victims even Army troopers who were previously thought to be safe from marauding PNP hit squads,” she said.

De Lima said the AFP should also admit that some of its senior officials were “somehow complicit in raising the PNP monster unleashed by Duterte, which is now devouring their own brothers.”

“Now that Duterte’s PNP monster, in its impunity and hubris, is biting even officers and men of the AFP, the AFP should realize that it cannot go on letting itself to be used by the very man responsible for the PNP’s criminal acts,” she said.

“AFP officers can no longer close their eyes to the connection between the blank check given by Duterte to the PNP to summarily execute and the cavalier execution by the PNP of their Army brethren,” De Lima added.