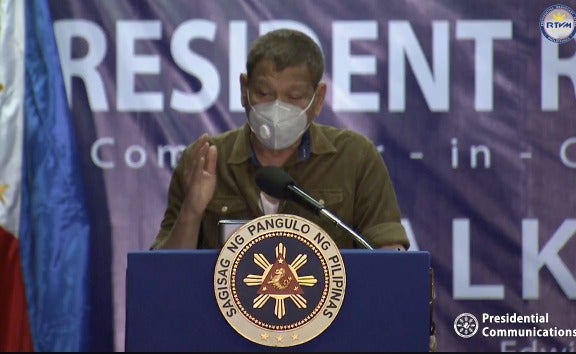 A screengrab from a live feed of President Rodrigo Duterte’s speech during a meeting with troops in Zamboanga City on Friday, July 3, 2020. RTVM Video

MANILA, Philippines — President Rodrigo Duterte on Friday gave his “word of honor” that he will find out the truth on the alleged “misencounter” between policemen and soldiers in Jolo, Sulu, and assured justice for the army men who were killed in the incident.

“I am giving you my word of honor that the investigation will proceed to find out the truth, unfettered and unbridled by anybody. Walang makialam. At ‘yung totoo lang. ‘Yun ang maasahan ninyo,” Duterte told troops in a speech in Zamboanga City.

“Kung sino man ang may kasalanan, then he has to pay for it. What I’m saying is we’re trying to figure out how we can in the meantime  to give you the assurance that justice will be done.”

“I’m giving it to you, as I said, as a word of honor of a President. I will find out the truth from the investigator,” he also said.

According to Army spokesperson Col. Ramon Zagala, the four slain soldiers were in the middle of a mission to “capture suspected bombers” in the area.

The Philippine National Police initially reported that the killing was a result of a “misencounter” but later on clarified and described what happened as a “shooting incident.”

Consequently, the chief of Jolo Municipal police as well as the nine police officers involved were removed from their posts.

Meanwhile, the President has already ordered the National Bureau of Investigation to fast-track its probe on the June 29 incident.