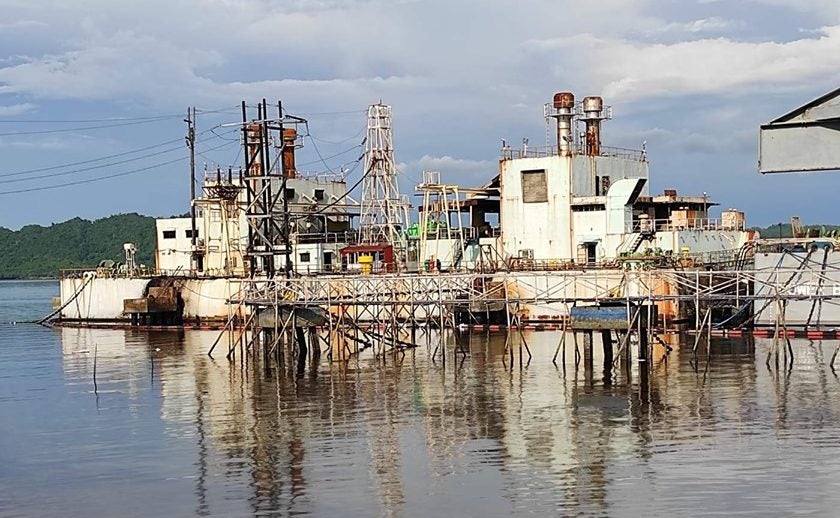 Bunker fuel leaked from Power Barge 102 off the waters of Iloilo City after an explosion tore a hole in its hull. (Photo courtesy of BFP-Iloilo City)

ILOILO CITY—Philippine Coast Guard (PCG) men are trying to contain an oil spill off the city coast after an explosion damaged a power barge on Friday (July 3).

An estimated 40,000 liters of bunker fuel has leaked from Power Barge 102 docked at the village of Barrio Obrero and spread to an area that could be as big as 1,200 square meters, according to the City Risk Reduction Management Office.

Commander Joe Luviz Mercurio, Coast Guard Iloilo station chief, said no injuries were reported but the explosion tore a hole nearly a meter in diameter on the hull of the power barge, spilling bunker fuel.

The barge, owned by AC Energy Corp., is estimated to be carrying 200,000 liters of bunker fuel.

Mercurio said PCG men and those of the Bureau of Fire Protection and other government agencies responded to the explosion and oil spill.

Spill booms were laid out around the barge and PCG men had been scooping bunker fuel that had leaked from the barge.

The operations were suspended around 7 p.m. but will resume early on Saturday (July 4), according to Mercurio.

He told Inquirer that the PCG had alerted officials in the towns of Leganes and Zarraga, which are in the direction of the water current, to be on alert for the spill. “We hope it will not reach the shoreline,” said Mercurio.

Mercurio added that the cause of the explosion in the barge is still being investigated but there had been work with the use of acetylene there prior to the blast.