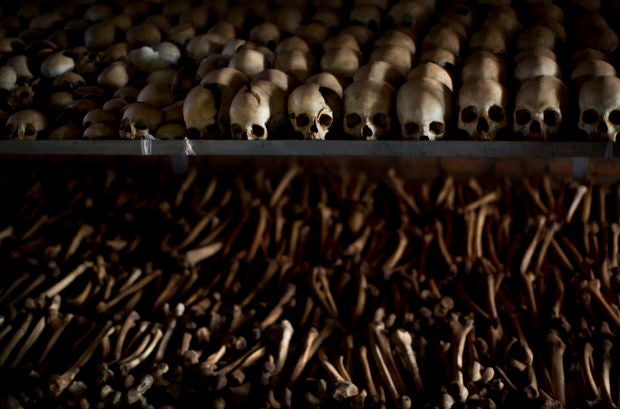 In this Friday, April 4, 2014 file photo, the skulls and bones of some of those who were slaughtered as they sought refuge inside the church are laid out as a memorial to the thousands who were killed in and around the Catholic church during the 1994 genocide in Ntarama, Rwanda. The Paris appeals court on Friday upheld a decision to end a years-long investigation into the plane crash that sparked Rwanda’s 1994 genocide, citing a lack of sufficient evidence. (AP Photo/Ben Curtis, File)

PARIS — The Paris appeals court on Friday upheld a decision to end a years-long investigation into the plane crash that sparked Rwanda’s 1994 genocide, citing a lack of sufficient evidence.

The probe has damaged France-Rwanda relations for years because it targeted several people close to current Rwandan President Paul Kagame. His justice minister welcomed Friday’s decision, and his supporters have denounced the investigation as an attempt to exonerate France’s suspected role in the genocide.

French investigating judges decided in 2018 to drop the probe, and family members of those killed in the crash appealed the decision. The Paris appeals court on Friday upheld it, according to a court official. Lawyers for the families can further appeal the ruling to France’s highest court, the Court of Cassation.

The plane had a French crew, and Rwanda has long accused France of complicity in the genocide, which France denies. The cause of the crash has long been a contentious issue.

The French investigation “has been a travesty of justice, a total and complete farce that should not have happened in the first place,” Rwanda’s minister of justice, Johnson Busingye, tweeted Friday.

Relations between Rwanda and France were under strain for years after the genocide, but have improved somewhat under French President Emmanuel Macron, who created a commission of researchers and historians tasked with investigating France’s role in Rwanda before and during the genocide. It is to deliver its conclusions next year.

Friday’s ruling came as one of the most wanted fugitives in Rwanda’s genocide, who was arrested in May outside Paris, is awaiting a decision on extradition. Felicien Kabuga, who is accused of equipping militias who took part in the genocide and broadcasting propaganda urging mass slaughter, was close to then-President Habyarimana.