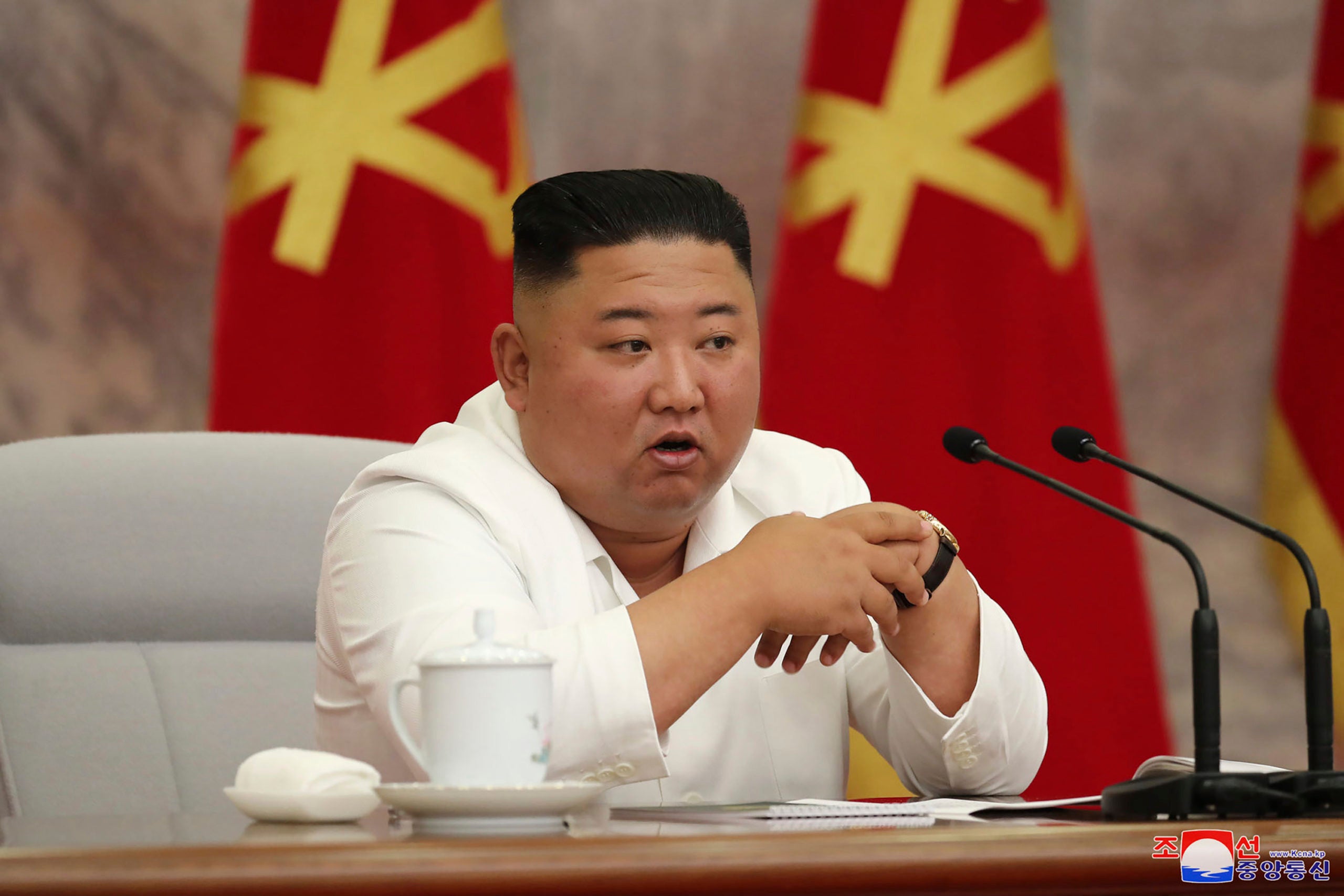 In this photo provided by the North Korean government, North Korean leader Kim Jong Un attends a Politburo meeting of the Central Committee of the Workers’ Party of Korea in Pyongyang, North Korea Thursday, June 2, 2020. Independent journalists were not given access to cover the event depicted in this image distributed by the North Korean government. The content of this image is as provided and cannot be independently verified. Korean language watermark on image as provided by source reads: “KCNA” which is the abbreviation for Korean Central News Agency. (Korean Central News Agency/Korea News Service via AP)

Despite the warning, Kim reaffirmed North Korea’s claim to not have had a single case of COVID-19, telling a ruling party meeting Thursday that the country has “thoroughly prevented the inroad of the malignant virus” despite the worldwide health crisis, the Korean Central News Agency said.

Describing its anti-virus efforts as a “matter of national existence,” North Korea earlier this year shut down nearly all cross-border traffic, banned tourists and mobilized health workers to quarantine anyone with similar symptoms to the disease.

Experts say the country’s self-imposed lockdown is hurting an economy already battered by stringent U.S.-led sanctions over its nuclear weapons and missile programs.

The KCNA report said Kim during the politburo meeting of the Workers’ Party “stressed the need to maintain maximum alert without a slight self-complacence or relaxation” as the virus continues to spread in neighboring countries.

The agency said Kim sharply criticized inattentiveness among officials and violations of emergency anti-virus rules and warned that a “hasty relief of anti-epidemic measures will result in unimaginable and irretrievable crisis.”

The North’s official Rodong Sinmun newspaper published several photos of Kim at the meeting, which were the first state media images of him in weeks. Neither Kim nor the ruling party officials who participated were wearing masks.

Kim’s statement suggests North Korea’s full border closure with China, its biggest trading partner, and economic pipeline, will likely continue despite the toll that is taking on the already heavily sanctioned economy.

According to Chinese data, the North’s exports to China and imports from it both plunged by more than 90% for two consecutive months in March and April. In May, the North’s trade volume with China increased by about 164% from the month before, suggesting North Korea was trying to restore trade, the IBK Economic Research Institute said in a report.

Cho Hey-sil, a spokeswoman at the South Korean Unification Ministry, told reporters Friday that it remains to be seen whether North Korea’s trade with China will fully resume.

Even before the pandemic, North Korea was grappling with the pain of U.N. sanctions imposed over its nuclear program. Its trade volume with China in 2019 was more than halved compared with 2016 figures after new U.N. sanctions targeting the North’s major export items such as coal, textiles, and seafood were adopted in recent years.

Kim was desperate to win sanctions relief when he engaged in a flurry of diplomacy with the United States, including three summits with President Donald Trump, in 2018 and 2019.

But those efforts have made little headway since the second Kim-Trump summit in Vietnam in February 2019 ended when Trump rejected Kim’s demands for extensive sanctions relief in return for partial denuclearization.

Last year, Kim launched an ambitious five-year national development plan, but experts say the coronavirus crisis likely thwarted some of his major economic goals. Kim in December declared a “frontal breakthrough” against the sanctions while urging his nation to stay resilient in the struggle for economic self-reliance.

In May, South Korea’s spy agency told lawmakers that panic buying had taken place in Pyongyang amid skyrocketing prices of imported food such as sugar and seasonings before authorities clamped down on those cornering the market.

North Korea monitoring groups in Seoul recently said the price of rice and key commodities and foreign exchange rates in markets in Pyongyang remains stable. Ahn Kyung-su, head of the Seoul-based private dprkhealth.org institute, which focuses on health issues in the North, said there could be Chinese aid shipments and unofficial bilateral trade taking place that isn’t reflected in official trade figures.