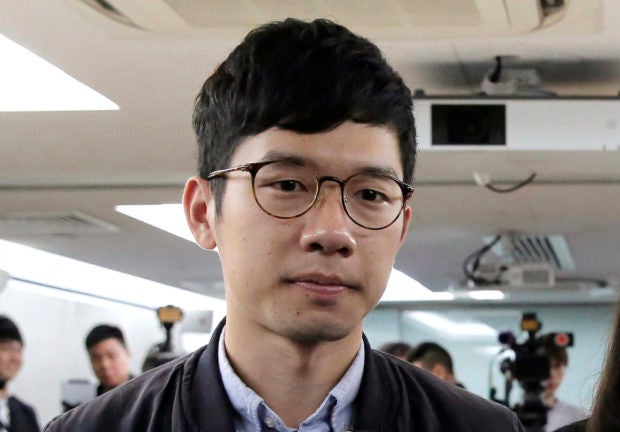 In this Jan. 27, 2018, file photo, pro-democracy activist Nathan Law, along with Agnes Chow and Joshua Wong, attends a press conference in Hong Kong. Prominent Hong Kong democracy activist Nathan Law has left the city for an undisclosed location, he revealed on his Facebook page shortly after testifying at a U.S. congressional hearing about the tough national security law China had imposed on the semi-autonomous territory. In his post late Thursday, July 2, 2020, he said that he decided to take on the responsibility of advocating for Hong Kong internationally and had since left the city. (AP Photo/Kin Cheung, File)

HONG KONG — Prominent Hong Kong democracy activist Nathan Law has left the city for an undisclosed location, he revealed on his Facebook page after testifying to a U.S. congressional hearing about a tough national security law China had imposed on the semi-autonomous territory.

In a post late Thursday, he said that he had decided to advocate for Hong Kong internationally and had left the city.

“As a global-facing activist, the choices I have are stark: to stay silent from now on, or to keep engaging in private diplomacy so I can warn the world of the threat of Chinese authoritarian expansion,” he said. “I made the decision when I agreed to testify before the U.S. Congress.”

Law told reporters in a WhatsApp message that he would not reveal his whereabouts and situation based on a “risk assessment.”

His departure comes two days after the national security law took effect, targeting secessionist, subversive and terrorist acts, as well as any collusion with foreign forces intervening in city affairs.

The Hong Kong government said in a statement Thursday night that popular protest slogan “Liberate Hong Kong, the revolution of our times” connotes a call for Hong Kong’s independence or its separation from China, meaning those using it or displaying it on flags or signs could be in violation of the new law.

Police arrested some 370 people Wednesday, 10 of whom were detained on suspicion of violating the national security law when thousands took to the streets to protest it.

In some cases, suspects were found to be carrying paraphernalia advocating Hong Kong’s independence, police said.

“Under this legislation [that] Beijing just passed about 24 hours ago, anyone who would dare to speak up would likely face imprisonment once Beijing targeted you,” Law told a congressional hearing via video link Wednesday. “So much is now lost in the city I love: the freedom to tell the truth.”

Law, 26, rose to prominence in Hong Kong as one of the student leaders of the pro-democracy Umbrella Revolution in 2014. In 2016, he became the youngest lawmaker elected to the city’s legislature but was later disqualified after he raised his tone while swearing allegiance to China during the oath, making it sound like a question.

He was a leader of the pro-democracy group Demosisto, with fellow activists Joshua Wong and Agnes Chow. All three resigned Tuesday ahead of the national security law coming into effect. With the loss of its top members, Demosisto dissolved.

Critics say the law effectively ends the “one country, two systems” framework under which the city was promised a high degree of autonomy when it reverted from British to Chinese rule in 1997.

The maximum punishment for serious offenses is life imprisonment, and suspects in certain cases may be sent to trial on the mainland if Beijing deems it has jurisdiction.

A 24-year-old man who was arrested for allegedly stabbing a police officer during protests on Wednesday has been charged with wounding with intent, police said Friday. He was arrested on board a plane to London, apparently trying to flee the territory. Police wouldn’t say if the man would face additional charges under the national security law.