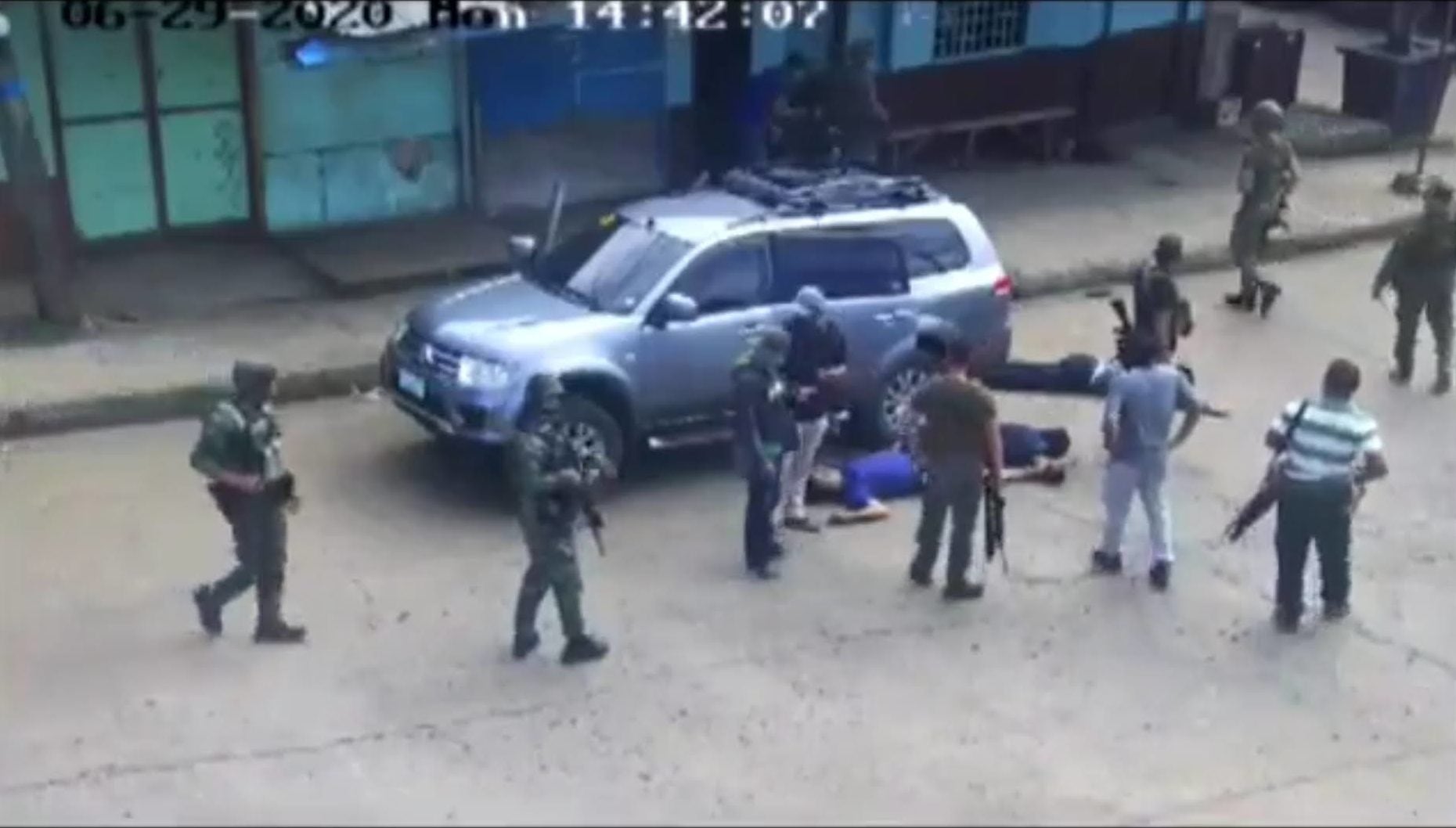 SOLDIERS NOT POLICE Army soldiers in uniform and plainclothes are seen in this screen capture of a closed-circuit television footage of the aftermath of the killing of four intelligence agents in Jolo, Sulu, by a group of policemen on Monday. Col. Ramon Zagala, the Army spokesperson, said the soldiers rushed to the site where they found no police officers.

An Army unit awaiting a signal to swoop down on an Abu Sayyaf bomb maker and two suspected female bombers instead received word that four of their comrades had been gunned down in Jolo, Sulu, a military spokesperson said on Thursday.

The team rushed to where the four Army intelligence operatives had been shot near the Jolo police headquarters on Monday afternoon, minutes after they were informed that the group’s leader, Maj. Marvin Indammog, had been killed, Army spokesperson Col. Ramon Zagala told the Inquirer.

Capt. Irwin Managuelod, Sgt. Jaime Velasco and Cpl. Abdal Asula were also killed by a group of policemen who then fled the scene in what was called a “misencounter” by the Philippine National Police which it later called a “shooting incident.”

“They thought it was the Abu Sayaff [who killed the victims] because there was no policeman when they got there,” Zagala said.

A closed-circuit television footage that spread on social media showed members of the Army unit looking at three of the slain soldiers sprawled on the ground outside their sports utility vehicle (SUV), which was near the Jolo police station. Some people had mistaken them for plainclothes police.

“These soldiers were prepared to go after Sawadjaan once Major Indammog tracked down his location,” Zagala said. He was referring to Mundi Sawadjaan, a bomb expert and a target of Indammog’s group.

“We don’t know how close they got to pinpointing Sawadjaan and his cohorts’ location because they were already shot to death and all focus turned to the incident,” Zagala said.

Indammog’s group was returning to Jolo from Patikul when they were stopped at a checkpoint and told to proceed to the Jolo police station despite identifying themselves as Army soldiers.

Near the station, Indammog got out of the SUV for still unknown reasons. Moments later he was shot. The police shot the three others, too, and abandoned the area. A police report said the soldiers had drawn their weapons but were beaten to the trigger by the policemen.

The Army had rejected the police account, saying the intelligence operatives were unarmed.

Maj. Gen. Corleto Vinluan Jr., commander of Joint Task Force Sulu, said Indammog’s team was about to conduct a raid on the suspected bombers somewhere in Jolo that Monday afternoon.

“They came from Barangay Mauboh, in Patikul town, on their way to Jolo for this mission. It has been their packet mission for three weeks,” Vinluan said.

Alleged IS leader in PHHe said they were set to capture Sawadjaan and two newly trained female suicide bombers when their plan was stalled after they were stopped at the checkpoint in Barangay Busbus.

“When they were ordered to report to Jolo Municipal Police Station, everything was no longer going according to Indammog’s plan, until they were fired upon by the cops,” Vinluan said.

Sawadjaan, who is in his early 30s, is a nephew of Abu Sayyaf subleader Hatid Hajan Sawadjaan, the alleged leader of the Islamic State (IS) group in the Philippines.

The military said Mundi Sawadjaan was behind a series of deadly blasts in Sulu in 2019. These include the Jan. 27 twin bombings at the Jolo Cathedral, which left more than 20 dead and over 100 wounded; a suicide bombing that killed eight people at an Army camp in Indanan, Sulu, on June 28, in which he fitted explosive vests on the two Egyptian bombers; and a checkpoint bombing also in Indanan on Sept. 8, which killed three people, including the foreign female suicide bomber.

Zagala said that as shown in the video, there were no police officers at the scene.

“They were all soldiers. The first thing they did is to verify the identities of the victims and check if there’s anyone alive then secure the equipment,” he said.

What was a planned “takedown” of Sawadjaan “evolved into [a] rescue, but unfortunately it was only recovery by that time.”

Zagala admitted and apologized for some “lapses” committed by the soldiers when they touched the SUV and the bodies of their comrades.

One of the soldiers was a brother of Asula. “He wanted to secure his brother, his belongings. He knew that his brother was the driver of the SUV,” Zagala said.

Interior Secretary Eduardo Año, a former head of military intelligence and chief of staff, said “my heart bleeds for our soldiers who were slain because I know these people personally.”

But he assured the public of a fair investigation by the National Bureau of Investigation.

“We will exact justice and we will make sure that those responsible shall be accountable,” Año said in a televised press briefing on Thursday.

He belied former Sen. Antonio Trillanes IV’s claim that the killing of the four soldiers was a result of “tolerating the EJKs (extrajudicial killings) the past four years.”

“EJK is not a policy of this government,” Año said.

Ferdinand Lavin, the NBI spokesperson and deputy director for forensic investigation, said one of the four soldiers, whom he did not identify, was shot eight times. Two others each had three gunshot wounds. No autopsy was done on the fourth soldier, Asula, who was immediately buried following Islamic tradition.

Medical examiners recovered fragments from a 5.56mm bullet, indicating that rifles had been used against the soldiers.

After the forensic examination, getting witnesses’ statements and reviewing video footage, the investigators will summon the police involved in the shooting, Lavin said.

Vice President Leni Robredo visited the wakes for Indammog, Managuelod and Velasco, expressing her grief over the death of the intelligence operatives and sympathy for their families.

“All of them are young men who died in the service of the country,” she said on her Facebook account. “They had such promising futures ahead of them.”At the Senate, Sen. Risa Hontiveros filed a resolution to open an investigation of the shooting.

She noted that the NBI had been tasked to probe the killings, but she said new measures may need to be instituted to reform the PNP.

“Our police should not be so trigger-happy,” Hontiveros said. She said the killing of the soldiers “further feeds the public’s distrust toward the PNP.”

“Extensive reform has to be done to restore the public’s trust in our institutions,” Hontiveros added. —WITH REPORTS FROM NESTOR CORRALES, LEILA B. SALAVERRIA AND NIKKA G. VALENZUELA

Your subscription could not be saved. Please try again.
Your subscription has been successful.
Read Next
Palace finalizing inputs on antiterror measure
EDITORS' PICK
House energy committee chair Arroyo bats for cheap electricity
Omega Speedmaster super racing: Tiny device massive change
vivo Philippines offers a free bouquet of flowers and a premium necklace perfect for Valentine’s Day
Only 38% of students grade 1 to 3 prefer local language as medium of instruction — Pulse Asia
ACT slams Edca on 124th anniversary of PH-American war: ‘Tila hindi umalis ang mananakop’
Philippines central bank to focus on inflation at next policy meeting – governor
MOST READ
Pokwang admits she lied about cause of split with Lee O’Brian: ‘Umasa akong aayusin pa niya’
Philippines’ own ‘Anna Delvey’ arrested in Taguig City
Vice Ganda asserts all is well with Karylle, takes swipe at ‘kuya’ who chimed in to be ‘trending’
Sy, Musk venture to finally offer internet services in PH by March
Don't miss out on the latest news and information.