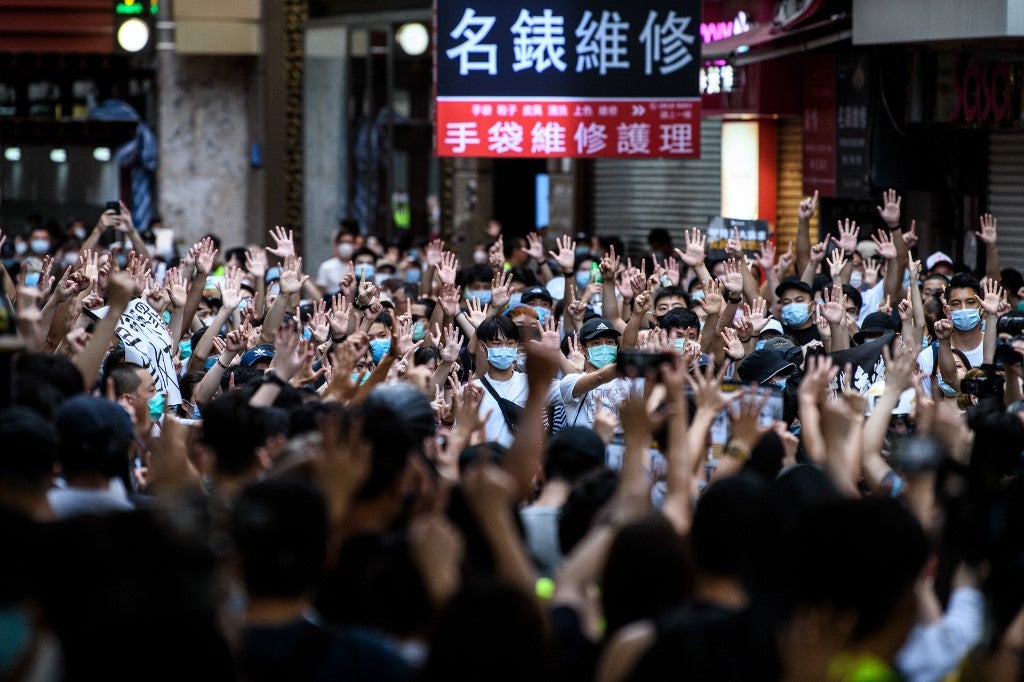 Protesters chant slogans and gesture during a rally against a new national security law in Hong Kong on July 1, 2020, on the 23rd anniversary of the city’s handover from Britain to China. – Hong Kong police arrested more than 300 people on July 1 — including nine under China’s new national security law — as thousands defied a ban on protests on the anniversary of the city’s handover to China. (Photo by Anthony WALLACE / AFP)

Prime Minister Scott Morrison said the situation in Hong Kong was “very concerning” and his government was “very actively” considering proposals to welcome in residents of the former British territory.

Asked by a reporter whether Australia could extend an offer of safe haven, Morrison responded “yes.”

He said the measures would soon be considered by his Cabinet, hinting strongly that it would be approved.

“We think that’s important and very consistent with who we are as a people.”

It comes a day after the United Kingdom announced a new route for those with British National Overseas status and their families to move there and eventually apply for citizenship.

Hong Kong was under UK jurisdiction until Britain handed it back to China in 1997 with a guarantee that Beijing would preserve the city’s judicial and legislative autonomy for 50 years.

But critics say the new law — passed by Beijing’s rubber-stamp parliament this week without its text being released to the public — breaches the “One Country, Two Systems” principle that formally entered international law in 1984.

Morrison said no final decision had been made on how Australia’s arrangements would be structured but the country was “prepared to step up and provide support” to Hong Kong residents.

Any offer is sure to further strain Canberra’s relationship with Beijing, coming after repeated clashes between the two sides.

Most recently, Australia enraged China by calling for an independent investigation into the origins of the coronavirus pandemic.

Canberra has also pushed back against what it describes as China’s economic “coercion”, covert influence campaigns and the use of technology companies like Huawei as a tool for intelligence-gathering and geopolitical leverage.

China has warned its students and tourists against going to Australia, slapped trade sanctions on Australian goods and sentenced an Australian citizen to death for drug trafficking.

Read Next
‘Wag naman OA’: Binay hits ‘frantic’ police practices vs protocol violators
EDITORS' PICK
Smart 5G goes live
Water remains our saving grace right now
PNP: Checkpoints back in MECQ areas
Been there, done that but what’s the difference between MECQ and GCQ?
BREAKING: 3,226 latest COVID-19 cases bring PH’s total to 106,330
A gem of a residence in the new normal
MOST READ
MECQ guidelines in infographics
MECQ in NCR, other areas: Mass transportation suspended, quarantine pass required anew
Doctors group to Duterte: ‘There was never a call for a revolt’
Want higher pay? Join the police force, Duterte tells nurses
Don't miss out on the latest news and information.