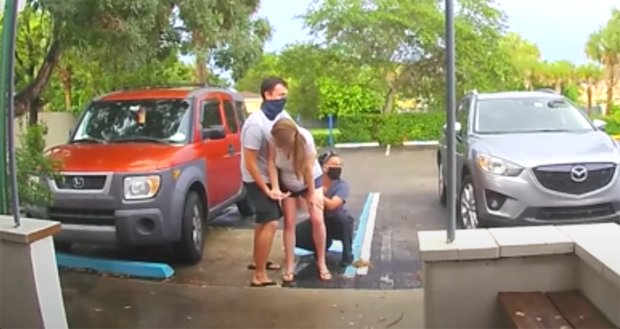 A woman suddenly gave birth to her baby while standing in a parking lot in Florida, United States on June 19.

Susan Anderson and her husband Joseph were driving to a birthing center when she felt the “need to push,” as per ABC-affiliate WPLG last Thursday, June 25.

Once Joseph parked their car in front of the facility, the couple quickly tried to enter it. However, Susan suddenly gave birth before they were even able to make their way inside the center.

“By the time we got to the first step the head was coming [out],” Susan was quoted as saying.

While the couple was not able to enter the building, a midwife named Sandra Lovaina assisted them in the parking lot.

The Natural Birthworks birthing center also posted security camera footage of the unusual birth on its YouTube page. The short clip showed Lovaina crouching on the ground while assisting Susan who was hunched over and holding on to her husband.

Due to Susan’s screams, police later approached the small group. Lovaina quickly assured the officers that she is a midwife and was helping Susan with her birth.

Seconds after, Lovaina caught the baby girl as she slipped through the side of Susan’s shorts. The midwife then gave the child to Susan who embraced her newborn as they later entered the building.

“This momma had a [super-fast] labor. In [m]idwife terms, it was precipitous,” the center stated.

A precipitous labor or rapid labor is “characterized by labor that can last as little as 3 hours and is typically less than 5 hours,” as per the American Pregnancy Association.

Susan later explained that she had been rushing to enter a birthing tub in the center since she initially planned to have a water birth. However, she noted that baby Julia “had other ideas.”

Meanwhile, Gelena Hingkley, another midwife at the facility, said that Susan had already been their client before.

“We’ve done her other delivery, and round two was just a lot faster,” Hinkley said in the report. “No one was expecting it to be that fast.”