KATHMANDU, Nepal — Nepal is offering farmers cash rewards for catching desert locusts to limit the damage caused by the destructive swarms that have ravaged harvests in India and Pakistan. 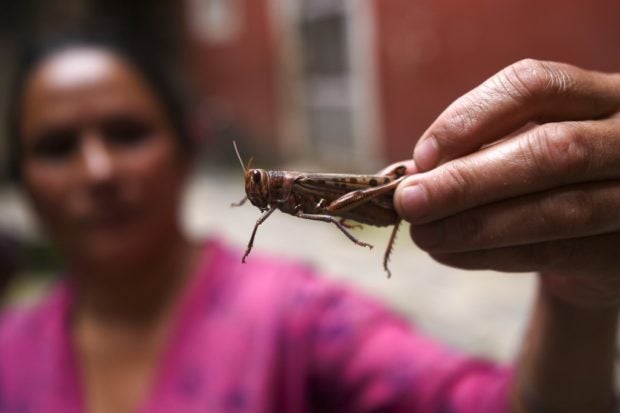 A woman holds a locust after catching it, in Kathmandu on June 30, 2020. Nepal is offering farmers cash rewards for catching desert locusts entering the Himalayan country in a bid to limit the damage caused by the destructive swarms that have ravaged harvests in India and Pakistan. South Asia is experiencing its worst infestation in decades, with the plague of locusts devastating agricultural heartlands in the neighboring countries in recent weeks. Photo by PRAKASH MATHEMA / AFP

South Asia is experiencing its worst infestation in decades, with the plague of locusts devastating agricultural heartlands and are now entering Nepal.

“Our decision is aimed at encouraging people to catch the insects instead of using pesticides which might be harmful to the environment,” agriculture ministry spokesman Khagendra Prasad Sharma, who handles the Far West Province, told AFP.

Farmers and other locals in two provinces that have already been invaded this week will be offered up to 25 rupees (21 US cents) for every kilogramme (2.2 pounds) of the insects.

The locusts are caught using huge mosquito nets that block their flight. They are also more easily caught at night when they are resting.

The migratory pests are then swept into large bags and brought to officials.

In the past three days, some 10 kilograms of locusts have been collected in the southern city of Butwal, province official Yam Narayan Devkota said.

“They are being collected in other areas too. Depending on the volume, they might be used as feed for chicken and livestock,” Devkota added.

Locust swarms have gnawed their way through crops across East Africa, the Arabian Peninsula and parts of India this year, and experts fear their numbers will explode as monsoon rains arrive this month.

In Pakistan, farmers are catching locusts to sell to officials — with the pests then turned into chicken feed — in a bid to offset the huge losses caused by the swarms.

Nepal’s agriculture ministry said that so far, the swarms have yet to swell to huge numbers and there have been no major crop losses.