Duterte sends 14th report to Congress on use of additional powers 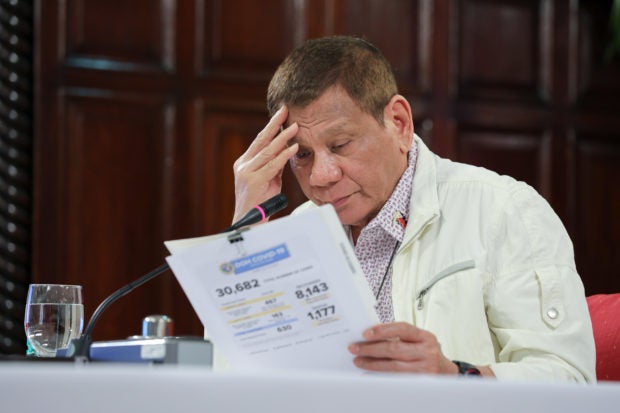 In this file photo, President Rodrigo Duterte reviews a document during a meeting with members of the Inter-Agency Task Force on the Emerging Infectious Diseases (IATF-EID) at the Malago Clubhouse in Malacañang on June 22, 2020. ROBINSON NIÑAL JR. / PRESIDENTIAL PHOTO

MANILA, Philippines — President Rodrigo Duterte has submitted to Congress his 14th report on the use of his additional powers to address the COVID-19 pandemic.

As mandated by the Bayanihan to Heal as One Act, the President is to report all acts performed in relation to the government’s efforts to combat the health crisis.

The President’s report dated Monday came even as Malacañang said that the law expired on June 25.

Duterte is expected to announce his decision on new quarantine classifications in various provinces.

The President, meanwhile, tightened restrictions in Cebu City and placed it under enhanced community quarantine after a high rate of infections was recorded.

Below is a copy of Duterte’s 14th report made public by Malacañang on Tuesday: