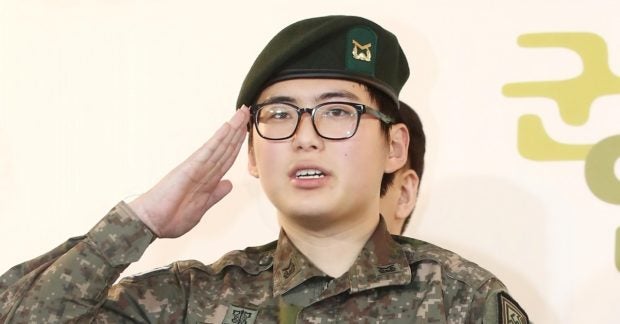 SEOUL — The South Korean Army was to make a decision Monday on whether to reinstate a former noncommissioned officer forced to leave the military following sex reassignment surgery, officials said.

Byun Hee-soo, 22, filed the petition with the Army Headquarters, in February, after a military committee ruled the previous month, based on a medical examination, that the staff sergeant is unable to continue to serve.

Byun underwent the transition surgery late last year in Thailand and has expressed a desire to keep serving in the military as a female soldier.

“The petition review session will take place later in the day, and a seven-member panel is expected to make a judgment today,” an Army officer said.

Byun earlier said if the petition is rejected, she will bring her case to court, according to the Military Human Rights Center.

Under South Korea’s conscription system, all able-bodied men must carry out compulsory service for about two years in a country that faces North Korea across a heavily fortified border. Those who change their gender are automatically exempted from this service.

Noncommissioned officers are volunteers, and the country has no rules prohibiting transgender people from entering the military. But chances are high such individuals would be eliminated through a physical exam, according to officers.

South Korea has no transgender soldiers, and the decision on the unprecedented case is expected to have an effect on the overall rights of transgender South Koreans. Yonhap

Read Next
North Korea paper lauds Kim Jong-un on his leadership anniversary
EDITORS' PICK
Infants bundled off; no one hurt in PGH fire
Tired of your Wi-Fi signal problems at home? Here’s a solution!
OPINION: Mischief Reef – where it all started
POVA x Mobile Legends Bang Bang: A partnership that’s built to win
CPA Australia and their designation: Advance your career
Fire-damaged PGH calls for donations
MOST READ
Leonen impeachment case moves forward in House
Hot, humid weather for PH on Monday — Pagasa
Longest recession since Marcos era
Long working hours are a killer, WHO study shows
Don't miss out on the latest news and information.