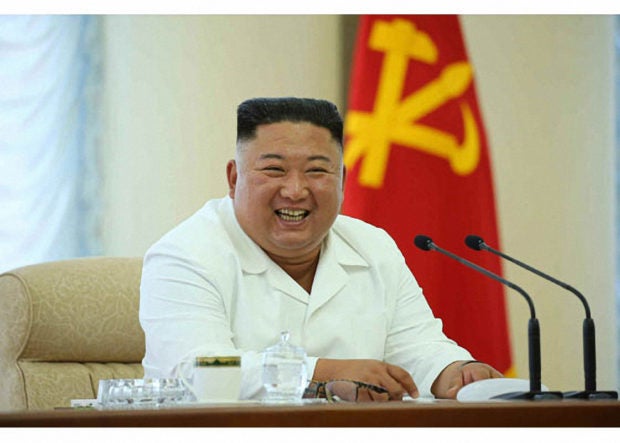 SEOUL — North Korea’s official paper lauded leader Kim Jong-un on Monday on the occasion of the anniversary of his fourth year as chairman of the State Affairs Commission, the communist state’s highest decision-making body, in an apparent effort to bolster internal unity.

Monday marks the fourth anniversary of Kim being designated as the commission’s chairman, but the North appears to have skipped any celebratory events amid coronavirus concerns. This year’s anniversary also does not fall on a five-year or 10-year anniversary when the North usually celebrates with major events.

Last year, a national meeting was held to celebrate the anniversary.

“Our solidarity and united allegiance towards our leader has gotten tougher through the fierce storms and ruthless fights with our enemies and has grown into an irresistible force,” said the Rodong Sinmun, the organ of the North’s ruling party.

The paper praised Kim’s accomplishments in strengthening military power and the economy, stressing that he prioritized the people in his policies and saying he “raised the status and power of our nation to the highest during the worst hardships.”

“War threats by the hostile forces and their madness to suppress us is not simply aimed at destroying our economy and hindering progress. It is aimed at disintegrating us and overthrowing the regime by bringing extreme pain and discontent,” it added.

Kim took over as leader of the North after his father and former leader Kim Jong-il died in late 2011.

In 2016, North Korea’s parliament bestowed a new state title upon Kim and appointed him as the chairman of the newly created state apparatus, the State Affairs Commission, in a move aimed at bolstering his one-man rule.