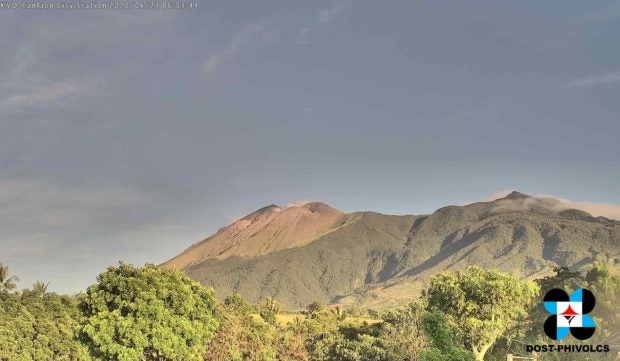 MANILA, Philippines — The Philippine Institute of Volcanology and Seismology (Phivolcs) has recorded 16 volcano-tectonic earthquakes on the western flanks and four volcanic earthquakes in the summit area of Kanlaon Volcano on Negros Island during a 24-hour observation period.

In its 8 a.m. bulletin on Monday, Phivolcs said it observed a “moderate emission” of white steam-laden plumes that rose 300 meters before drifting northwest and northwest.

Sulfur dioxide (SO2) emission was measured at an average of 116 tons per day on June 27.  SO2 is a major gas component of magma.

“Ground deformation data from continuous GPS measurements indicate a slight deflation of the lower and mid slopes since January 2020. However, short-term electronic tilt monitoring on the southeastern flanks recorded inflation on the lower to mid slopes that began on June 21, 2020,” said Phivolcs.

Phivolcs explained that these parameters indicate that hydrothermal or magmatic activities are occurring.

In its 8 a.m. bulletin on Sunday, the agency said it recorded 30 volcano-tectonic earthquakes on the western flanks and one volcanic earthquake in the summit area during the 24-hour observation period.

Alert level 1 remains in effect in the vicinity of the volcano, which means it is in abnormal condition and a period of unrest.

Entry into the four-kilometer radius permanent danger zone is strictly prohibited because of possible sudden and hazardous steam-driven or phreatic eruptions.