Many overworked nurses in this city are complaining of a lack of government and private sector support and many may leave the front line after battling the COVID-19 pandemic for the past five months with still no clear victory in sight.

“The morale of our nurses is simply very low right now. They need much support,” said Dr. Peter Mancao, public relations officer of the Cebu Medical Society, a group of more than 3,000 physicians and medical specialists.

“It’s not that they don’t want to serve anymore but it’s more of an appeal to the government to also focus on those in the medical front lines in the battle against COVID-19,” he added.

Joseph Stephen Descallar, president of the Cebu chapter of the Philippine Nurses Association (PNA), on Friday said many nurses here wanted to quit for “fear of the unknown” in addition to the absence of hazard pay to those in private hospitals and delayed payments to those in government hospitals.

“I hope the government will look into the plight of nurses in Cebu,” he told the Inquirer. 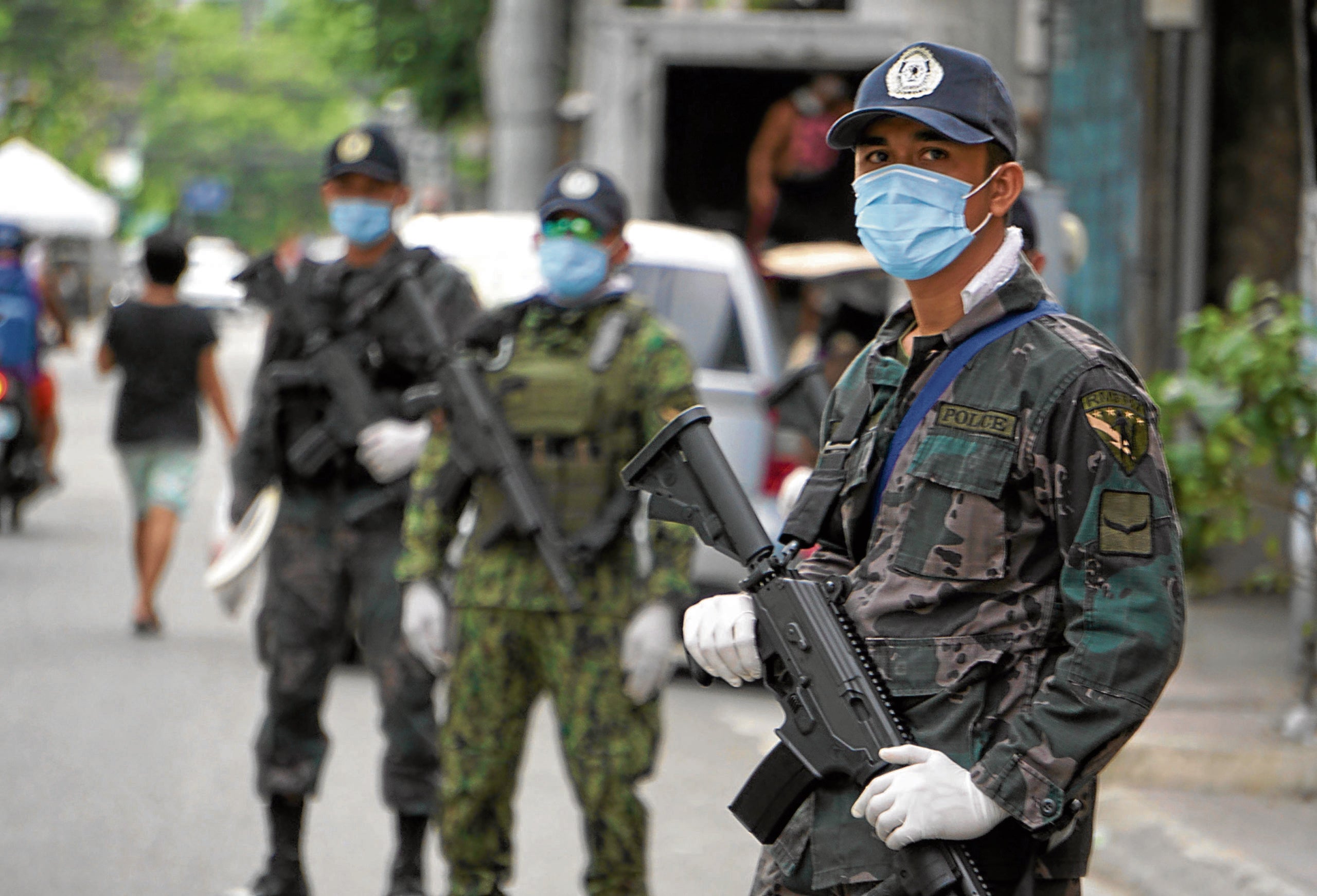 LOCKDOWN ENFORCERS Armed police in combat uniform and protective gloves man a road checkpoint in Cebu City to enforce a strict lockdown on the city that has seen a surge in the number of COVID-19 cases. Close to 1,000 policemen from other regions, including 160 commandos from the Special Action Force, have arrived in the city to assist its 1,200-strong police force. —AFP

In a statement, PNA-Cebu Chapter also cited other “alarming issues,” such as discrimination and threats against nurses and the lack of personal protective equipment.

Not only in Cebu but elsewhere in the country, nurses and other health workers involved in caring for COVID-19 patients have been forced out of their rented residences, attacked or threatened with harm and generally shunned by people who believe that they could be spreading the virus that causes the severe respiratory disease.

Last March, a male nurse who was on his way home, was splashed with chlorine by two unidentified men on a motorcycle in Cebu City.

Descallar assured nurses that the PNA and the Integrated Bar of the Philippines would provide aid in those instances.

“In terms of hazard pay, we humbly urge private institutions to provide the said incentive to all our nurses who are risking their lives to save others. And for government agencies to release such in a timely manner,” he said.

Nurses working in government hospitals receive a hazard pay of P500 per day. In private hospitals in Cebu City, nurses do not receive hazard pay, according to Mancao.

“Our nurses deserve to be treated better than they are treated by some people right now as they are working beyond their capacity, and even risking their lives and their families just to fulfill their duty to provide quality health service amid obvious risks, physical exhaustion and depleted resources,” Descallar said.

“We continue to appeal to the general public and concerned authorities and administrators to also do their part in this challenging situation and show compassion to all our nurses. Our brave front-liners are our strong defense in stopping this pandemic,” he added.

Mancao urged the government to map out plans to improve the condition of nurses and other health-care workers in the city.

He urged the government to provide all health workers with the “correct” equipment that usually consist of gloves, respirator masks and protective clothing.

“I pity our nurses in the city. They are so overworked and are filled with fear as to what may happen to them,” said the heart surgeon.

The government reimposed the enhanced community quarantine in the city this week due to the growing number of COVID-19 cases.

Nationwide, the DOH on Friday reported the country’s total cases rose to 34,073 with an additional 1,006, the third time that more than a thousand new cases were recorded in a day. It said 274 more had recovered, raising the number of survivors to 9,182. The death toll climbed to 1,224 with 12 more fatalities.

The DOH said there currently are 1,390 COVID-19 patients in various Cebu City hospitals and 1,407 others in isolation facilities.

The DOH is looking into possible explanations for the surge in COVID-19 cases in the city. One is whether the city properly implemented the minimum health standards when it started easing community quarantine restrictions last month, according to Health Undersecretary Maria Rosario Vergeire.

She also said they wanted to determine whether there was community transmission or there were “imported cases.”

Of the city’s 80 barangays, 61 reported new cases in the last two weeks.

Currently, Cebu City has one of the highest positive rates in the country. From June 1 to June 15, 24.3 percent of all persons tested were positive for SARS-CoV-2, the virus which causes COVID-19. That rate increased to 32.8 percent from June 16 to June 24, which was more than double the 13.7 percent recorded from May 16 to May 31.

Nationwide, the current positive rate is just at 6.8 percent. In Metro Manila, it is 7.2 percent.

Vergeire said they were also looking at how the city implemented health protocols, and how it conducted isolation, testing and contact tracing.

“And, of course, we are also looking at the behavior of the people. Are there any specific practices or are they doing something common that helps increase transmission?” she added.

Mancao said Environment Secretary Roy Cimatu, who was appointed by President Duterte to oversee the city’s COVID-19 response, should find ways to resolve the problem of hospitals being filled to capacity.

He also appealed to Cimatu to deputize someone who would focus on the medical aspect of the COVID-19 situation in the city.

“Please consult medical officers before you decide to reopen businesses,” he said.

A paramedic, who declined to be identified for fear of reprisal, was dismayed by what appeared to him to be an effort to hide what was happening in the city.

He said that prior to Cimatu’s visit at Vicente Sotto Memorial Medical Center (VSMMC) on Wednesday, several patients at the emergency room for COVID-19 patients had been moved to the second floor, and therefore unseen by the secretary.

Mancao said he heard that many patients were also transferred to the Cebu City Quarantine Center, which is intended for mild and moderate cases, prior to Cimatu’s visit to the hospital.

The paramedic said patients continued to wait inside ambulances for hours.

He recalled that a male senior citizen had to stay inside his ambulance for 29 hours before he was brought to the emergency room of VSMMC.

“Our ambulance has become an extension of the hospital,” he said.

Asked how long the lines were at the hospitals, the paramedic said that once he was 17th on the wait list and there were others behind them. “Just yesterday (June 25), I brought a patient to a private hospital but was told that we were 101st on the list,” he said.

He said he had to bring back home one patient since she could not be accommodated and she later died there.

“Last week, I lost three patients who died in the ambulance without being attended to. And this is just one ambulance,” he added. “Every day, I feel this pinch in my heart but this is what’s happening here. But we continue to serve because this is what we do.”

Some hospitals, the paramedic said, resorted to “sitting accommodation” where patients would sit on chairs due to lack of hospital beds.