Tourists still staying away from Boracay 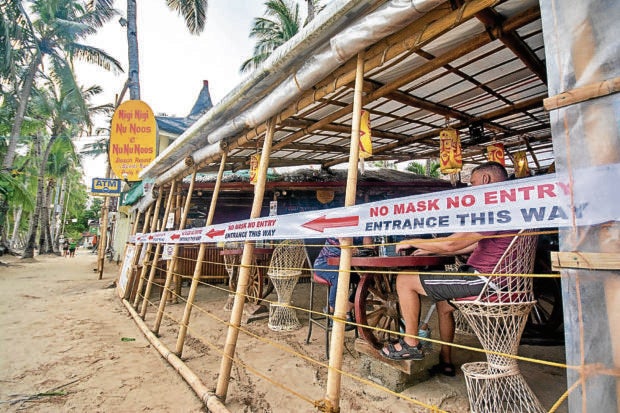 BORACAY DINING Boracay Island has been opened to visitors from Western Visayas region but restaurants, hotels and other establishments allowed to operate have imposed health protocols, like wearing of face masks and observing physical distancing, to ensure that the spread of COVID-19 will be contained. —JACK JARILLA/CONTRIBUTOR

ILOILO CITY, Iloilo, Philippines — Tourists are arriving on Boracay Island in trickles after government agencies confirmed that a recent visitor, who was part of a group of Bureau of Fire Protection (BFP) personnel, tested positive for the new coronavirus disease (COVID-19).

More than a week after 28 BFP personnel in Western Visayas had been relieved, the agency had not submitted a report, including the itinerary of the infected employee, to the local government of Malay in Aklan province, said Madel Joy Tayco, spokesperson for the town’s interagency task force on COVID-19.

From June 16, when the island reopened to tourists from the region, until June 22, only 48 tourists visited the island. The biggest single-day arrival was recorded on June 20 with 19 tourists, while the lowest was on June 17 with two, records from the Malay tourism office showed.

Tourist arrivals on the island before the pandemic range from 3,000 to 5,000 daily.

Acting Malay Mayor Frolibar Bautista, in an earlier interview, said tourists were still afraid to travel due to the pandemic, but many who were planning to go to Boracay called off their plans after reports came out that a COVID-19-infected BFP employee was on the island from June 12 to June 14.

It urged Bautista, the Civil Service Commission and the Department of the Interior and Local Government (DILG) to file charges against the BFP employee.Residents and officials of Boracay and Malay have decried the violation of protocols, saying this spoiled the reopening of the island to tourists from Western Visayas.

A team from the BFP central office is looking into reports that the employees held a party on the island while purportedly attending a conference, and is determining their liabilities.

The legal department of the Iloilo City government is also preparing complaints to be filed in the Office of the Ombudsman or in the Inter-Agency Task Force for the Management of Emerging Infectious Diseases, according to its mayor, Jerry Treñas.

As of Sunday, 164 of the 196 BFP Western Visayas personnel placed under quarantine in Iloilo had tested negative for the disease.

In Malay, 55 people who had close contact with or were exposed to the infected BFP employee had been quarantined and tested. They included five BFP personnel; 27 hotel staff of Hue Hotel and Resorts Boracay, where the group stayed; and 14 passengers and nine crew members of a boat that transported the infected person to the island.

In a statement sent to the Inquirer, Hue Hotel and Resorts Boracay said it received the notices from the Department of Tourism (DOT) Western Visayas on the cancellation of its certificate of authority to operate and DOT accreditation.

“We are prepared to fully cooperate with their investigation. We trust that it will bring to light the surrounding circumstances that led to the occurrence of this incident,” according to the statement released by Ryan Pangilinan, corporate director of sales and marketing of Hospitality Innovators Inc., which manages and operates the establishment.