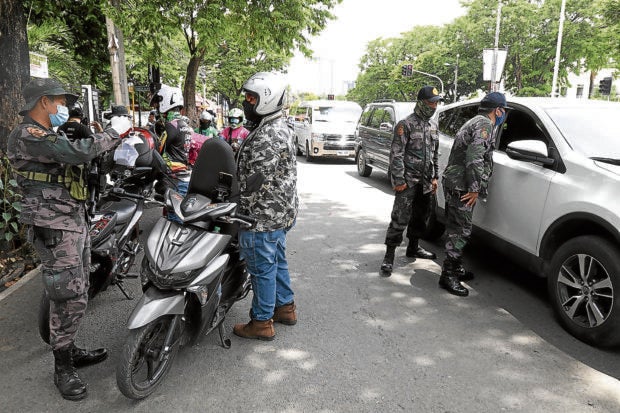 INSPECTION Policemen guarding checkpoints set up around Cebu City stop motorists to inspect their documents and inquire about the purpose of their travel as the government restricts movement of residents due to the rising coronavirus infections in the city. —JOWENCE NIÑA MENDOZA

CEBU CITY, Cebu, Philippines —A mother in her 50s pleaded with a policeman on Wednesday to allow her to cross the street and buy food and medicines for her three children.

The cop reprimanded her for leaving her village of Sambag I, a prohibited act after Interior Secretary Eduardo Año canceled all quarantine passes issued in the city effective 10 p.m. on Tuesday. Although the market and several drug stores were located just across the street, the area belongs to another village, Pahina Central.

At least 93 checkpoints have been set up to ensure that people would stay within their villages. Thirteen of these are guarded by policemen in fatigue uniforms along the main roads and 80 manned by “tanod” (village watchmen) and volunteers in interior roads in each of the 80 barangays in the city.

On Wednesday, military vehicles were seen in Cebu City while two military helicopters dropped leaflets containing the government’s reminders on how to stop the spread of COVID-19. The choppers also conducted “aerial monitoring” of the situation in the city, said Police Col. Cydric Earl Tamayo, officer in charge of the Cebu City police.

Año ordered the cancellation of 250,000 quarantine passes after sensing that several people were on the streets despite the enhanced community quarantine (ECQ) status.

“ECQ is a form of hard lockdown so people need to stay inside their homes,” he said.

People, who want to buy food, can only go out within their villages. Exempted were health-care workers, call center agents and bank employees.

In Manila, presidential spokesperson Harry Roque said Cimatu could ask the help of the military to impose quarantine restrictions in Cebu City.

“This is not martial law. This has been decided upon by the Supreme Court, and this is as far as enforcing the ECQ in Cebu is concerned. Normally, we have the police enforcing it, but if the police is not enough, then the Armed Forces can also enforce the lockdown,” Roque said in an interview over the ABS-CBN News Channel.

According to him, Cimatu’s actions are tantamount to being acts of the President.

Duterte, if needed, would issue an executive order to give legal validity to any actions taken by Cimatu, he said.

Roque backed the Department of the Interior and Local Government’s decision to withdraw quarantine passes issued to Cebu City residents, saying it was a “very good move.”

“I think the point being made is it’s just too many. It’s a quarter of the residents of the entire city that’s allowed to go out. That defeats the purpose, of course, of an ECQ,” he said. But several residents were caught off guard by the cancellation of their quarantine passes.

“The cancellation of quarantine passes was done abruptly. We were not able to prepare,” said 32-year-old Reggie Maratas, a resident of Barangay Tisa, who had to rush out early Wednesday to buy food and other supplies for his family.

Councilor Dave Tumulak said the national government should have presented clear guidelines about the cancellation of quarantine passes.

“I, too, was shocked when I learned about the development past midnight. People didn’t know how they would be able to buy food and other necessities,” he said in a radio interview.

Tamayo appealed to residents to follow the rules. “What our policemen did was to first warn them. If they resist, then we have to arrest them,” he said.

He said the police and military would focus on at least nine villages severely affected by COVID-19. These are Mambaling, Luz, Labangon, Suba, Kamputhaw, Tejero, Sambag II, Duljo Fatima and Basak San Nicolas.

They would also monitor Cebu City Jail, where inmates had been infected.

“I know this is a difficult time for everyone. There will be difficult days ahead but let’s keep our eyes on our common goal which is to save our community from this pandemic,” he said in a video message posted on Facebook.