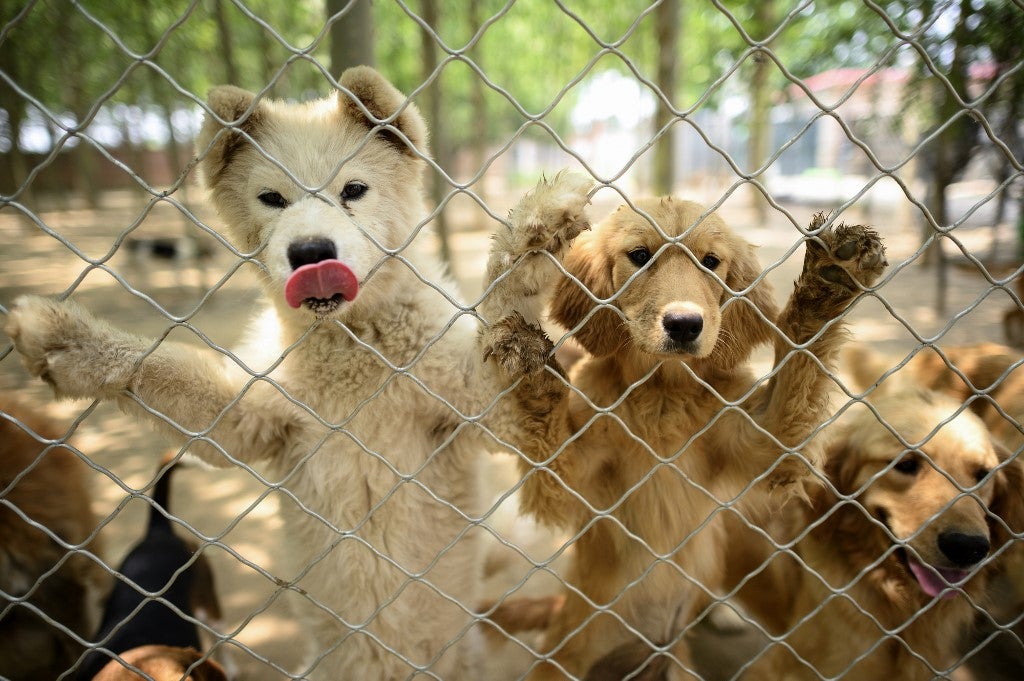 This photo taken on June 22, 2020 shows rescued dogs at a shelter on the outskirts of Beijing run by the NGO No Dogs Left Behind. – No Dogs Left Behind has taken in hundreds of animals from the dog meat trade, which are adopted by overseas dog lovers, and in recent months has received many purebred dogs from breeding farms that have been dumped due to lower consumer demand for pets during the COVID-19 coronavirus epidemic. (Photo by NOEL CELIS / AFP)

Volunteers at a Beijing dog shelter hand out treats to dozens of rescued animals which had been bound for a controversial dog meat festival underway this week in southern China.

The annual event in Yulin city always provokes outrage from animal rights activists, but this year they hope the coronavirus epidemic will be the death knell of a tradition they see as cruel.

It is “inhumane and barbaric,” said Jeffrey Bari, founder of the No Dogs Left Behind organization, which keeps around 200 canines in large wire enclosures on the outskirts of the Chinese capital and re-homes them.

Activists save hundreds of dogs every year by raiding slaughterhouses and intercepting trucks. They say traders steal pets and strays and transport them long distances, mostly to the country’s south.

“You feel a kind of achievement because you’ve changed some dog’s life,” said Ling, who volunteers at the center.

Dog meat is traditionally believed to be good for the health in certain parts of China, but the habit has been in steady decline as more and more affluent urban dwellers choose to keep the animals as pets.

The COVID-19 outbreak appears to have further reduced the appetite for dog meat after the disease was linked to a market in the central city of Wuhan selling animals for food.

Amid growing concerns about hygiene, China fast-tracked laws banning the consumption and trade of wildlife.

While the law does not apply to dog meat, Shenzhen and Zhuhai — southern cities not far from Yulin — banned the consumption of dogs in April, becoming the first cities in China to do so.

And last month the agriculture ministry reclassified dogs as companion animals, not livestock, though it did not explicitly prohibit eating them. 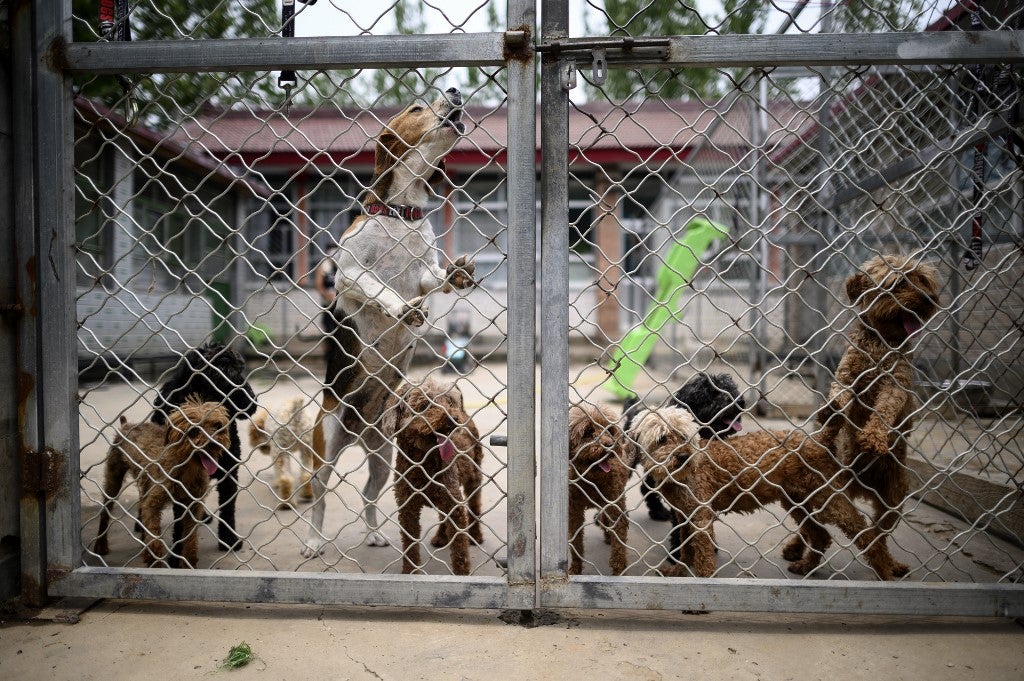 This photo taken on June 22, 2020 shows rescued dogs at a shelter on the outskirts of Beijing run by the NGO No Dogs Left Behind. – No Dogs Left Behind has taken in hundreds of animals from the dog meat trade, which are adopted by overseas dog lovers, and in recent months has received many purebred dogs from breeding farms that have been dumped due to lower consumer demand for pets during the COVID-19 coronavirus epidemic. (Photo by NOEL CELIS / AFP)

But restaurant workers involved in the week-long event, which they say started Sunday and has been renamed the “Yulin Summer Solstice Festival,”  told AFP that attendance was down.

“The number of arriving customers has dropped a lot,” said a man surnamed Chen.

He said the dog meat restaurant where he works would open as normal this festival without any special events or pricing like in past years.

Some posts on the Chinese social network Weibo called for the festival to be canceled entirely after COVID-19 and a recent fresh outbreak of the disease in Beijing linked to a wholesale food market.

“Is it not enough that (the festival) is infamous throughout the world? Where will food safety become a reality… Stop this damn festival at once,” one user wrote.

Experts pointed to a shift in public attitudes towards dog meat consumption and food safety in the wake of the virus.

A proposal for China’s first nationwide law banning animal cruelty received wide public support during the annual parliamentary session in May, while a viral video of a Chinese university student torturing a cat sparked mass public outcry in April.

Chen said neither police nor the government had ordered his restaurant to stop selling dog meat as a result of the animal’s reclassification as pets.

“I would say that (the rule) impacted the rest of the country and people were talking about it, but I did not see it having an immediate impact on the dog meat trade in Yulin,” said Peter Li of the animal rights group Humane Society International.

Despite the efforts of activists and concerns about hygiene, the Yulin event has persisted with the local government’s tacit permission.

“Most of the activities related to the sale of dog meat there are in violation of existing Chinese food safety regulations,” said Deborah Cao, professor of animal law and ethics at Griffith University in Australia.

But she said “existing food safety laws in China are not enforced in most instances” and there is “no accountability.”