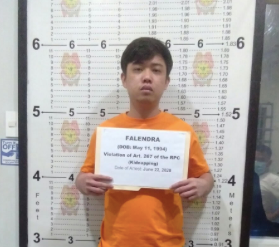 MANILA, Philippines — Police officers arrested a foreigner in Makati City on Monday for his involvement in the alleged kidnapping of a Philippine offshore gaming operators (Pogo) firm worker and her cousin.

In a report on Tuesday, Estomo said agents of AKG conducted a rescue operation at a building in Makati City where Falendra was arrested and illegally detained Chinese national Xie Peiwu was rescued.

The rescue operation was hatched after AKG received a complaint from Xiong Lifei, who was also previously kidnapped by Falendra and his accomplices.

Based on Xiong’s complaint, three unidentified Chinese men, a Filipino driver and Falendra arranged a meeting with her in front of her residence to talk about her work at a Pogo company last June 18.

Upon meeting with the suspects, Xiong said she was immediately abducted inside a van as her kidnappers taped her mouth and tied her hands. Subsequently, Xiong was brought to an unknown place in Tagaytay City, Cavite.

On June 20, Xiong managed to escape while her abductors were asleep. She then found a couple, who helped her and brought her to their home in Pasig City.

A day after her escape, Xiong received a call from her uncle in China who informed her that her cousin Xie was kidnapped by the same abductors.

The abductors demanded 450,000 Chinese yuan in exchange for Xie’s freedom, which prompted Xiong to report the kidnapping to AKG.

Falendra is now detained at the PNP AKG Headquarters while a complaint for kidnapping and illegal detention is being filed against him.

AKG will conduct further investigation to track down the other suspects.

Read Next
Soldier slain, 9 others wounded in Army clash with Abu Sayyaf in Sulu
EDITORS' PICK
Smart releases Hyun Bin’s second TVC
DOH to present new method of reporting COVID-19 cases next week
Almost 4,000 former communist rebels get financial aid from gov’t–DILG
Philippines logs 1,494 new COVID-19 patients; tally now at 41,830
EuroMillions Superdraw: A lottery draw unlike any other is coming to the Philippines
Water remains our saving grace right now
MOST READ
NAIA Terminal 3 to open for international flights starting July 8
As Ringo Starr turns 80, he talks about his life, Beatles journey, including that unfortunate Manila experience
‘Keep our silence:’ Duterte tells troops not to avenge slain agents
Lacson calls report ‘malicious,’ but journalist says she tried to contact him
Don't miss out on the latest news and information.