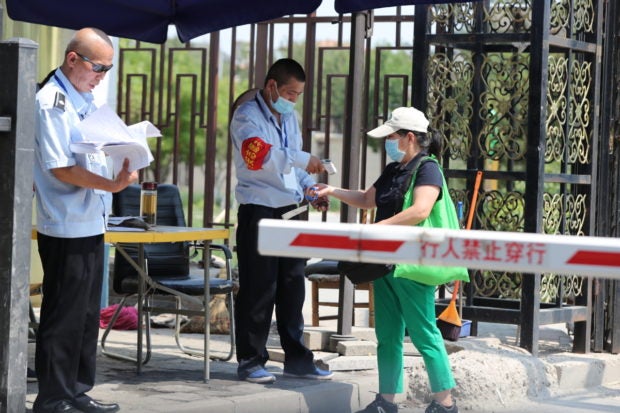 A volunteer checks the temperature of a resident entering a community in Beijing’s Chaoyang district on Friday. Photo by Wang Jing/China Daily/Asia News Network

BEIJING — Beijing Ditan Hospital has expanded its medical facility to 1,070 beds to prepare for COVID-19 cases, and professionals from other provinces will come to aid future investigation and analysis, the deputy head of the hospital said on Friday.

As a designated medical facility for novel coronavirus patients in Beijing, Ditan Hospital has received 183 patients, including two in critical condition and 11 with severe symptoms as of Thursday.

“So far, the conditions of the patients with severe symptoms and in critical condition remained stable,” Wu Guo’an, deputy head of Beijing Ditan Hospital, said at a news conference.

“Many experts in critical care who have worked against the virus in Wuhan, Hubei province, have joined us and we are doing our best to treat the patients.”

A total of 102 medical personnel, including 26 doctors, 62 nurses, eight inspectors and six radiologists, have been transferred from 18 municipal hospitals to support the medical treatment, Wu said.

The centers for disease control of Jiangsu, Zhejiang, Shandong and Henan provinces will each send 10 people to assist in the epidemiological investigation and analysis, according to Pang Xinghuo, deputy head of the Beijing Center for Disease Control and Prevention.

The capital reported 25 new cases of COVID-19 on Thursday, according to the municipal health commission.

Among them, 21 are related to Xinfadi wholesale market in Beijing’s Fengtai district and eight worked together in a restaurant near the market, according to Pang.

The remaining four are undergoing epidemiological investigation, she said.

In addition to the cluster infection, the Peking University International Hospital in Changping district of Beijing has been temporarily closed after the hospital reported one nurse infected with the novel coronavirus on Thursday.

The infected nurse was in close contact with a patient in Haidian district who was confirmed to have the virus on June 14. The nurse was on duty until being identified as a close contact, said Wu Bin, deputy head of Changping district’s government.

The health authorities have immediately closed the hospital and carried out epidemiological investigations. The hospital has been disinfected, and its outpatient and emergency treatment has been temporarily suspended, Wu said.

Since the June 11 outbreak in Xinfadi, 183 confirmed cases have been reported in Beijing. The provinces of Liaoning, Sichuan, Hebei, Zhejiang and Henan have found confirmed cases connected with the capital.

Due to the decreased number of customers recently, some restaurants in Beijing have temporarily closed their dine-in service.

Wu Zunyou, chief epidemiologist at the Chinese Center for Disease Control and Prevention, said on Friday that there is no need to carry out nucleic acid tests for everyone in Beijing, which has over 21 million permanent residents, Beijing News reported.

But it’s necessary to keep alert and conduct prevention measures like wearing masks and avoiding crowds, he said.

The sampling results from Xinfadi market showed that seafood and bean products have been found with more contaminated samples, said Li Fengqin, director of the microbiology lab at the China National Center for Food Safety Risk Assessment.

She suggested not eating the frozen seafood and bean products, adding that it was possible both food and packaging could be contaminated by coronavirus.