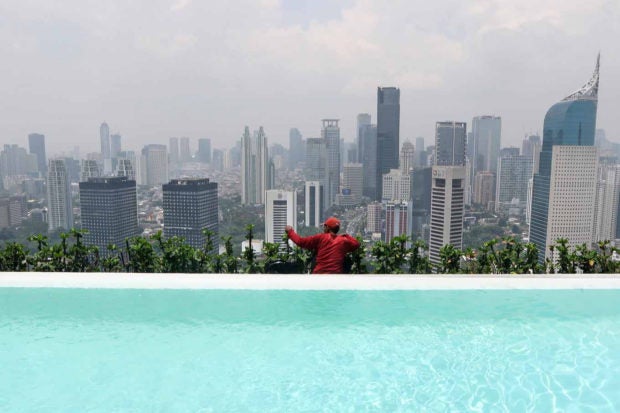 Office buildings are seen in Jakarta in this undated photo. The Indonesian economy is heading toward gloomier skies this year as the COVID-19 pandemic has yet to show any signs of subsiding. The Jakarta Post/Asia News Network/Dhoni Setiawan

JAKARTA — The Indonesian economy faces gloomier skies this year as the COVID-19 pandemic has yet to show any signs of subsiding, forcing government officials, the central bank, economists and international institutions to project weaker and weaker growth as the outbreak unfolds.

The Asian Development Bank (ADB) projected Indonesia’s gross domestic product (GDP) to shrink 1 percent this year, the weakest since the 1998 Asian financial crisis as the coronavirus pandemic has inflicted a “significant economic disruption” in the country. The forecast is a down revision from 2.5 percent growth it projected in April, according to the ADB’s Asian Development Outlook Supplement.

“The COVID-19 pandemic has caused significant economic disruption globally and in Indonesia, with adverse impacts on jobs and livelihoods, especially among the most vulnerable segments of society,” ADB country director for Indonesia Winfried Wicklein said in a statement on Thursday.

The coronavirus has forced people to stay at home to contain the disease, disrupting business activity as shops, factories and offices are required to shut their doors. As economic activity slows, millions of Indonesians have lost their jobs and run the risk of falling into poverty.

The government estimates 1.8 million to 4.8 million people may fall into poverty this year, while 3 million to 5.2 million may lose their jobs because of the severe economic impact of the pandemic.

“Timely implementation of policy measures, such as those included under the Indonesian government’s economic recovery program, will go a long way toward helping Indonesia bounce back and safeguard the welfare of households,” Wicklein said.

The government has allocated Rp 695.2 trillion (US$49.63 billion) in funds, the latest increase from the previous allocation of Rp 677.2 trillion, for health care and the economic stimulus package to soften the outbreak’s impact.

The economy grew 2.97 percent in the first quarter this year as household spending and investment growth plunged, dragging down the country’s economy to its weakest growth since 2001 as it began large-scale social restrictions (PSBB) to curb the spread of the virus.

After almost three months of the PSBB, the country began to gradually reopen the economy, albeit at 50 percent capacity, to boost economic growth and curb job losses.

Previously, several other multinational organizations also projected a grim outlook for the economy.

The World Bank projected zero percent growth for Indonesia this year as the global economy is expected to see its deepest downturn since World War II.

The Organization for Economic Cooperation and Development (OECD) projected the Indonesian economy to shrink 2.8 percent this year even if the government manages to avoid a second wave of infections. If it is hit by a second wave, however, the economy could witness a 3.9 percent contraction.

The coronavirus has infected over 43,800 Indonesians and killed at least 2,300 as of Friday afternoon, official data show, from just two positive cases in early March.

Finance Minister Sri Mulyani Indrawati said on June 16 that the PSBB acted as headwinds that would cause an economic contraction by 3.1 percent in the second quarter. She expected GDP growth of between zero and 1 percent while maintaining the government’s projection of 2.3 percent growth in the baseline scenario and 0.4 percent contraction in the worst-case scenario.

“We are looking at economic developments and will try to mitigate the downside risks so that it will not get worse,” she said, adding that the government hoped for the recovery process to start in the third quarter.

Just days after Sri Mulyani’s statement, Bank Indonesia lowered its growth projection as it cut the benchmark interest rate in an effort to support the economy. The central bank now projects the country’s GDP to grow between 0.9 and 1.9 percent this year from the previous estimate of 2.3 percent.

Experts and economists are also projecting a weaker economy and a slow recovery for the country.

State-owned Bank Mandiri economists projected on June 17 that the country’s GDP would contract by 3.44 percent in the second quarter this year and by 0.95 percent in the third quarter before the economy bounces back to grow 1.62 percent in the fourth quarter.

Fourth quarter recovery, however, would only be possible if there is no second outbreak in the country. Should the recovery go smoothly, Bank Mandiri industry and regional research department head Dendi Ramdani projected the economy to grow 0.02 percent this year.

Major Indonesian fund manager Batavia Prosperindo Aset Manajemen (BPAM) forecast the country’s GDP growth to range from 0.5 percent to a 0.5 percent contraction this year, with the path to recovery to be slow.

“When this whole COVID-19 [situation] is resolved, we expect to see a U-shaped recovery in the domestic economy,” president director Lilis Setiadi said on June 17. “We are not going to see a sharp recovery like a V-shape.”