Amid COVID-19 pandemic, Indonesia frets about another health crisis as dengue cases spike 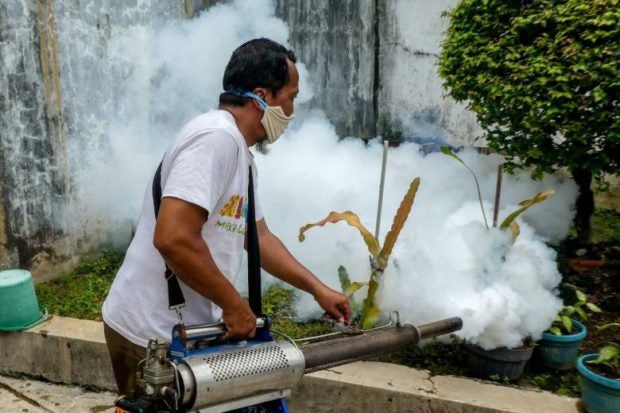 A man fumigates an area in Jakarta on April 11, 2020. AFP via The Straits Times/Asia News Network

JAKARTA — Indonesian authorities are worried about another health crisis on its hands, dengue hemorrhagic fever, amid the ongoing coronavirus pandemic.

Between January to June 17, 64,251 dengue hemorrhagic fever cases were reported with the death toll hitting 385, according to the Health Ministry.

Tourism hotspot Bali island reported the highest number of cases at 8,930, followed by the country’s most populous province of West Java with 6,337.

Health Ministry’s director for vector-borne and zoonotic diseases Siti Nadia Tarmizi told The Sunday Times that the 60,000-plus cases recorded this year were lower than 98,000 during the same period last year.

But a major concern this year, she said, is why the cases have continued to climb though the peak months of March and April for dengue fever had passed.

The fatalities reported so far were also half of the figure in the same period a year ago, she added.

“We normally see a very low number of dengue hemorrhagic fever in June… We’re still trying to figure out why we still record quite many cases in June,” Dr Nadia said, citing several hundreds of cases in a single day.

With many parts of the country easing social restrictions, the Health Ministry is encouraging operators of office buildings, places of worship and other venues to check the presence of larval mosquitoes and to carry out fogging or applying larvicide.

Indonesia in 2016 reached its all-time high dengue hemorrhagic fever cases and fatalities, with 204,171 cases and 1,598 deaths.

The world’s fourth most populous nation of about 270 million only records dengue hemorrhagic fever cases, a severe dengue fever marked by bleeding.

The number of dengue fever cases, whose patients are usually treated at home with prescribed drugs, is estimated to be 10 times bigger than the number of the dengue hemorrhagic fever cases, according to Dr Nadia.

Vector borne disease expert, Dr Rita Kusriastuti, pointed out the change of weather pattern this year, with the transition from the dry season to the monsoon season occurring in May instead of March, contributed to the big number of cases in June.

She also noted that the Covid-19 pandemic has put pressure on efforts to prevent the dengue hemorrhagic fever.

“The system put in place to monitor larval mosquitoes both independently by residents and by the government did not work as during the pandemic, as all the energy was dedicated to tackle the Covid-19,” she said.

Dr Nadia said the restrictive measures to curb the spread of the Covid-19 had limited the movement of health officers who monitor larval mosquitoes door-to-door and distribute larvicide to residents, locally known as jumantik.

Mr I Wayan Widia, head of disease prevention and control division at Bali health agency, said that the province’s significant number of cases was caused by the absence of mandatory once-in-month clean up by its residents due to the Covid-19 social restrictions. This, he said, has led to some places such as drains, to become fertile ground for mosquito breeding.

“With the stay-at-home advice, people didn’t carry out activities to destroy mosquito nests massively,” he said.

Other places with water reservoirs, such as hotels and resorts, were also left unattended as most hospitality workers were off duty thus contributing to mosquito breeding, he added.

Ms Erlina Salmun, who is in charge of disease prevention and control at the health agency of East Nusa Tenggara province, attributed the number of fatalities to people’s lack of knowledge about the dengue fever, leading them to seek medical treatment for their sick family members mostly when it was too late.

“The patients were sent to hospitals only when their condition was already severe,” she said.