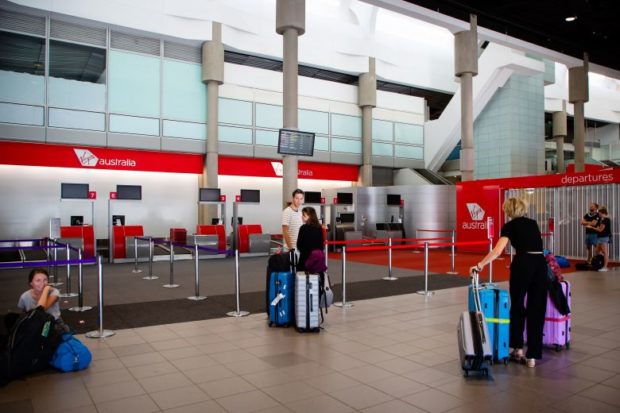 Early indications suggest that many Australians are willing to start flying again. AFP via The Straits Times/Asia News Network

SYDNEY — Australia’s success in reducing its Covid-19 cases has prompted domestic airlines to start adding flights, but travelers are quickly learning that the flying experience is noticeably different to before the pandemic.

While international flights remain almost entirely grounded, Australia’s carriers have begun increasing domestic capacity ahead of the busy mid-year school holiday period, which begins over the next two weeks.

Qantas and its budget subsidiary, Jetstar, plan to boost their domestic capacity to 15 percent of pre-pandemic capacity by the end of the month, up from about 5 percent last month. For Qantas, this is expected to reach 40 percent by the end of July.

Virgin Australia, which went into administration in April with debts of almost A$7 million (S$6.7 million), operated at 6 percent of its pre-pandemic capacity as of last week and is due to fly at 13 percent by early July. Tigerair Australia has not resumed flights.

But early indications suggest that many Australians are willing to start flying again.

But the flying experience has changed considerably.

First, passengers arrive at airports that are a shadow of their former bustling selves. Many shops and food outlets are still shuttered, and airport lounges remain closed but may open next month. Hand sanitizing stations have been installed across the terminals.

Airlines employ much fewer ground staff, and security screenings have often been reduced to just one line, such that queues of safely distanced people can stretch across the terminal.

As they board, passengers are offered masks, though wearing them is voluntary. Sanitizing wipes are also offered for wiping down seat belts, trays and armrests.

Airlines have scaled back meal services – drinks are restricted to bottled water only – and have removed in-flight entertainment and magazines. Crew try to keep contact with passengers to a minimum and people are encouraged to remain in their seats for the duration of the flight.

Despite these various changes, the federal government has exempted airlines from social distancing requirements. This means passengers sit next to each other – an experience that travelers have reported as slightly unusual, given that, back on the ground, they try to avoid contact with others.

Mr David Flynn, the editor-in-chief of the Executive Traveller website, flew on Qantas and described the experience as “surprisingly straightforward and relatively stress-free”.

“The new dictates of social distancing definitely take some getting used to, and it’s clear that flyers need to be a little better prepared when it comes to everything from meals to movies,” he wrote.

“Unless you find safety cards to be a riveting read, we suggest extending the BYO meal approach to BYO entertainment.”

Australia has been winding back Covid-19 restrictions as its case numbers drop. As of Saturday (June 20), Australia had recorded 7,410 cases and 102 deaths. During the past week, the country has recorded an average of 15 new cases per day.

But a lingering impediment to the return of domestic travel is the closure of some state borders. New South Wales and Victoria, the two most populous states, have kept their borders open. Queensland, which is popular with tourists, is closed but plans to allow interstate visitors to return from July 10 if case numbers remain low.

On June 12, Qantas chief executive Alan Joyce flew for the first time since March, admitting that it was “a little different to my last flight”.

“It will be some time yet before things feel truly ‘normal’,” he wrote in a post on LinkedIn. “But there is cautious optimism that we are starting to emerge from what has been a very challenging chapter.”