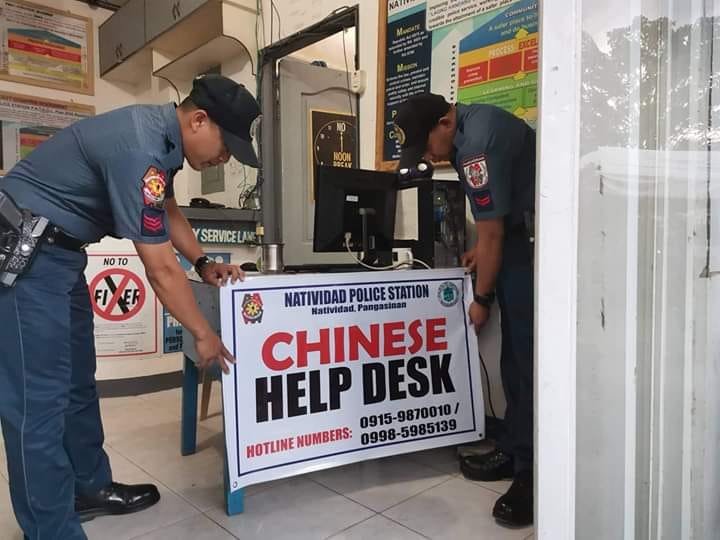 “These are old photos of various tourist police help desks taken in previous years during the surge in arrivals of Chinese tourists and until early this year when the Chinese embassy sought the help of the PNP to address the rising number of Chinese nationals getting involved or victimized in crimes such as kidnapping related to POGOs (Philippine offshore gaming operators) and casino loan shark operations,” PNP spokesman Brig. Gen. Bernard Banac said in a statement on Saturday.

One of the photos of a Chinese police desk from Natividad Police Station in Pangasinan was recently shared online. The photo was posted publicly by the provincial police station in February this year.

To recall, PNP said it would establish help desks solely for Chinese as crimes involving Chinese nationals continue to rise in the Philippines.

PNP chief Gen. Archie Gamboa also previously announced the creation of technical working groups from both the Philippine and Chinese government which would study the frequency of crime incidents by Chinese nationals.

Apart from help desks, the PNP-AKG also announced in August last that it sent its members to China to learn Mandarin which will be used for facilitating police operations involving Chinese nationals. AKG said their studies were funded by the Chinese government.

PNP-AKG’s records showed that casino-related kidnappings of Chinese nationals were 36 in 2019. The number of kidnappings in casinos were 16 in 2018 while 17 cases were recorded in 2017.

Read Next
Vico: FaceApp funny but ‘data could be used by people with bad intentions’
EDITORS' PICK
DOH to present new method of reporting COVID-19 cases next week
Philippines logs 1,494 new COVID-19 patients; tally now at 41,830
Smart releases Hyun Bin’s second TVC
Water remains our saving grace right now
EuroMillions Superdraw: A lottery draw unlike any other is coming to the Philippines
Almost 4,000 former communist rebels get financial aid from gov’t–DILG
MOST READ
NAIA Terminal 3 to open for international flights starting July 8
Lacson calls report ‘malicious,’ but journalist says she tried to contact him
As Ringo Starr turns 80, he talks about his life, Beatles journey, including that unfortunate Manila experience
‘Keep our silence:’ Duterte tells troops not to avenge slain agents
Don't miss out on the latest news and information.