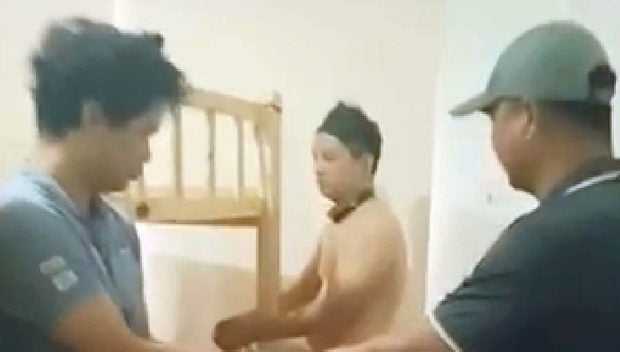 DEBTOR’S JUSTICE A PNP antikidnapping team recently rescued two Chinese nationals (left and center) in an operation in southern Metro Manila. Both men were in handcuffs when found, with the naked one—a Pogo employee detained for not paying his debts to his Chinese employer—sporting welts on his back and bruises on his thighs. —SCREENGRAB FROM VIDEO TAKEN BY PNP ANTI-KIDNAPPING GROUP

MANILA, Philippines — The Philippine National Police Anti-Kidnapping Group (PNP-AKG) keeps among its evidence a video showing a naked Chinese man with a sleeping mask apparently used to blindfold him pulled up to his forehead, standing on bare feet while handcuffed to a bunk bed.

The man, who worked in a Pogo (Philippine offshore gaming operator) at the time of his captivity, had huge bruises on his thighs and what appeared as welts on his back from the beating he suffered while detained in a safe house for alleged nonpayment of a debt to his employer.

The video captured a male voice noting “May tama, may tama,” referring to the naked man’s injuries. The man kept silent and would not look at his rescuers when one of them asked him in English about his attackers’ identities.

PNP-Anti-Kidnapping Group spokesperson Lt. Col. Jowel Saliba said it was evident that the man had been “hit with hard objects.” He said the video was taken during a rescue operation conducted “somewhere in southern Metro Manila.”

The influx of Chinese nationals—mostly Pogo employees on tourist visas and casino players on gambling junkets organized in China—has made a significant impact in the Philippines’ peace and order situation.

Their crimes — mostly kidnapping for ransom (KFR) and, lately, prostitution in dens run exclusively for Chinese Pogo workers — do not directly affect Filipinos but have added to the responsibilities of the police, particularly its antikidnap team.

“Casino-related kidnappings” of mostly Chinese nationals totaled 36 in 2019. Of the 40 victims, only 21 have been accounted for, along with 58 suspects.

The number of casino-related kidnappings was 17 in 2017 and 16 in 2018. This year’s figure reflects a very obvious increase.

When the PNP-AKG fails to question a victim, the case is considered unsolved, Saliba said. This happens often because kidnap victims released by their captors are sent directly to the airport either with a ticket back to China or cash to buy one themselves.

“We are used to dealing with KFR cases involving organized criminal syndicates who kidnap to raise funds. Casino-related and Pogo-related cases are an emerging phenomenon,” Saliba noted.

According to the information obtained by the PNP-AKG, victims of casino-related kidnappings in Manila are usually scouted early on in China. “Agents” of kidnap syndicates look for “targets” and invite them to Manila to gamble or work.

Once the potential victims are here, the Chinese syndicate entices them to play in various casinos, offers to lend them money in the form of casino chips, makes them sign promissory notes, and takes away their passports. Players who win are required to pay their creditor a 20- to 30-percent commission.

Players unable to pay back are taken to a hotel or safe house near the casino where their torture is recorded on video. Players may also be moved from one safe house to another and are released only when money is wired by their relatives to their captors.

Pogo-related kidnappings grabbed public attention in mid-December when the video of 28-year-old Pogo worker Zhou Mei went viral. Zhou is shown screaming for help as her abductors pulled her into a gray van. CCTV footage collected by the Makati police showed the van driving around the building where she lives in the city’s business district several times before she was kidnapped.

The team of Makati police chief Col. Rogelio Simon has identified Zhou’s kidnappers. One has left the country and three others remain at large. Simon is frustrated by the refusal of Zhou and her husband to file a criminal case that would allow his team to pursue the suspects.

While police investigators suspect that Zhou’s abduction had more to do with computer data she allegedly stole from her employer, her case brings to the fore the ugly situation of exploited Pogo employees recruited from China.

Chinese workers in Pogos are often promised a specific monthly salary to work in an online gaming facility in the Philippines, the PNP-AKG said. When they arrive, usually on a tourist visa, they either discover that the promised salary is a lie, or they are forced to sign usurious loan agreements to force them to stay.

Those who try to quit or are unable to settle their debt are detained in crowded staff houses rented by their employers and looked after by hired “guards” until relatives in the mainland pay up.

Detaining persons who fail to pay debts is commonplace in China. It is considered an “acceptable” practice among foreigners here and the victims do not complain, Saliba said.

“Yung victims mismo, accepted na may utang [sila] and ayaw mag-complain. Sabi, sa China ganun daw. Kapag may utang, you suffer the consequences. KFR is justified since [the captors are only] demanding money owed them. But under our laws, if you are detained and deprived of liberty and released in exchange for a sum of money, that is kidnap for ransom and is punishable by [a life sentence],” Saliba said. 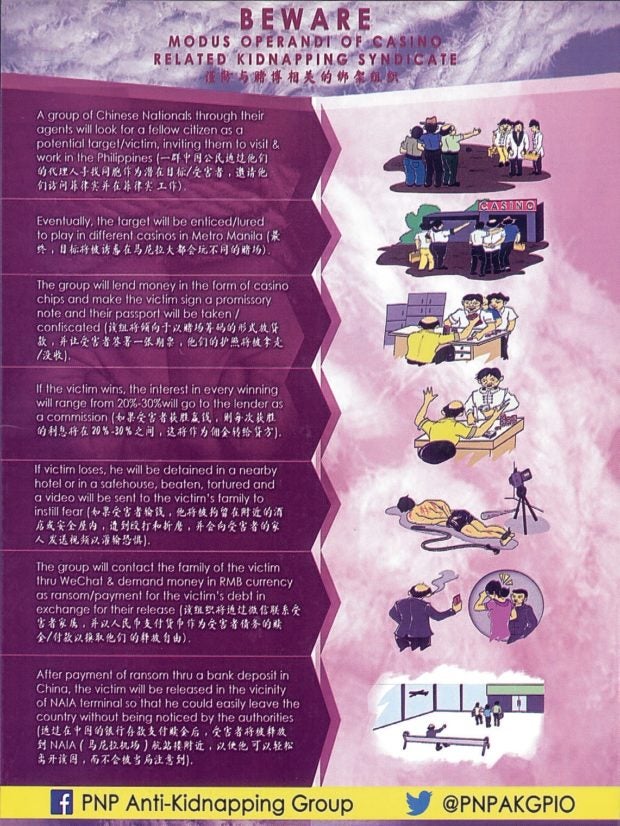 MODUS OPERANDI A handout from the PNP Anti-Kidnapping Group illustrates the scheme used by “casino-related kidnapping syndicates,” which starts with Chinese “agents” attracting potential victims by inviting them to visit or work in the Philippines.

“If people are detained and only released once their relatives in China pay … under our laws, this is like kidnap for ransom.”

In yet another shocker, Philippine law enforcers have found sex dens for Pogo employees. In less than four weeks from September to October, separate teams of the PNP and the National Bureau of Investigation raided three places in the cities of Makati and Parañaque, and rounded up a total of 154 female sex workers, mostly Chinese, and their protectors. The establishments catered exclusively to Chinese men, but at least one was willing to accommodate a Filipino client if sponsored by a Chinese national.

Police Maj. Gen. Guillermo Eleazar, the former chief of the PNP National Capital Region Police Office, acknowledged the “increasing number of foreigners” that must be monitored “especially if it involves preying on women who were brought here to become sex slaves.”

Saliba said it was possible that the PNP-AKG’s tally of KFR cases involving Chinese nationals was incomplete. More than the issue of potential complainants sent straight to the airport, the police force also has to contend with the language barrier and a lack of resources to deal with this new kidnapping trend.

To gather information on each KFR case, the PNP-AKG must hire a Chinese interpreter to talk to both victims and suspects. An interpreter charges P5,000 a day—an expense not included in the police unit’s 2019 budget.

There are instances when an interpreter is unavailable, or the PNP-AKG has on its hands more than one set of victims and suspects at the headquarters on a given day.

“If we have interpreters who are regular employees, things would be easier. They would be on call to talk to victims and suspects,” Saliba said.

There are also cases when the antikidnap group is forced to prepare accommodations for Chinese kidnap victims in its main building in Camp Crame, if only to make sure they are always available for questioning. The building’s conference room is converted into a “lodging area” when necessary.

“If these complainants remain at large, we are not sure if we can still talk to them at all,” Saliba said. 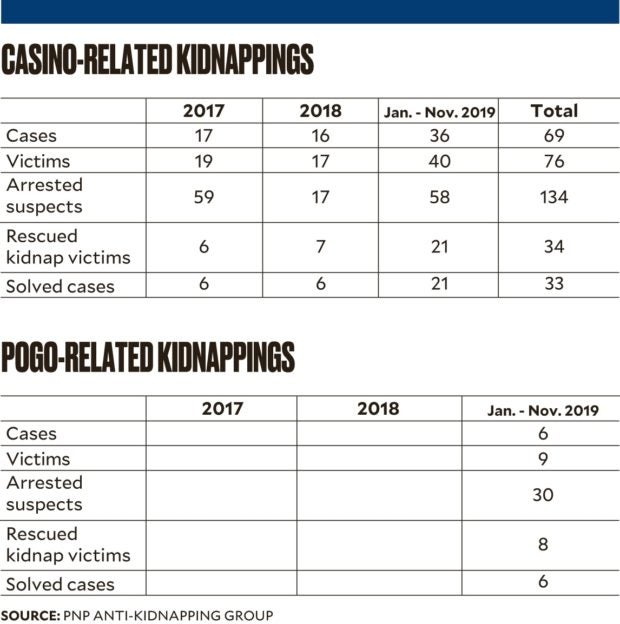 He recalled that the Chinese Embassy promised to set up a “Chinese desk” in the PNP-AKG to help investigators deal with the kidnap cases. This was way back on Oct. 4 when the PNP-AKG held an antikidnap summit attended by stakeholders, including business groups and representatives of the Philippine Amusement and Gaming Corp., Bureau of Immigration, Pogos and casino operators.

Saliba said representatives of the Chinese Embassy “promised to replicate” the initiative of the Korean Embassy that set up a Korean desk in the PNP Criminal Investigation and Detection Group to assist Korean citizens.

“There was a verbal promise to receive complaints from [Chinese] nationals because we have difficulty communicating with them, but as of now, [there is nothing yet],” he said.

While the kidnappings “happen only within the circle of Chinese nationals,” these still impact on the local peace and order situation, Saliba said.

“We have numbers … statistics that still say something about our peace and order,” he said. “The number of kidnappings is rising, it’s alarming. While we can explain that this phenomenon does not have a direct effect on us … they are doing it with impunity, [invoking] the Chinese style of justice. We need to assert our laws. Our laws should apply.”