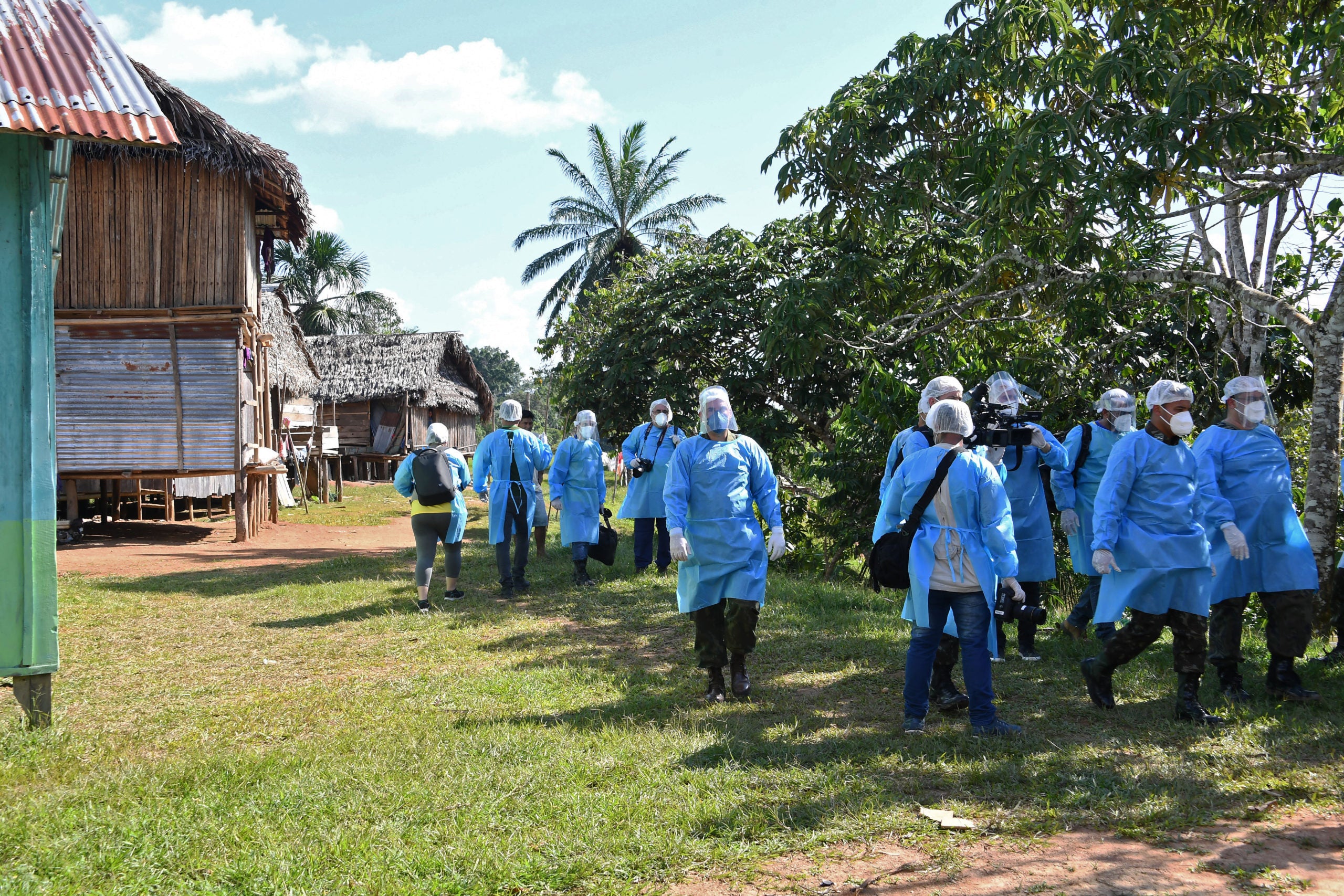 The medical team of the Brazilian Armed Forces arrives at the Cruzeirinho village, near Palmeiras do Javari, Amazonas state, northern Brazil, on June 18, 2020, to assist indigenous population amid the COVID-19 pandemic. – The Brazilian Armed Forces launched a program to assist isolated populations in the Amazon to help fight the new coronavirus. (Photo by EVARISTO SA / AFP)

The health ministry said it had recorded 54,771 new infections, a jump it said was largely due to “instability” in its reporting system during the week, which meant some states were reporting figures from multiple days at once.

That brought the total number of infections in Brazil to 1,032,913, with 48,954 deaths — second only to the United States worldwide.

Despite the grim figures, the infection curve in Brazil is finally showing signs of flattening.

But the country of 212 million people has emerged as one of the most worrying hotspots in the pandemic.

Since the start of June, it has registered the newest infections and deaths of any country in the world, according to an AFP count based on official figures — more than 518,000 and 19,000, respectively.

It has recorded daily death tolls of more than 1,000 on each of the past four days.

Brazil has struggled to set a strategy for dealing with the pandemic.

President Jair Bolsonaro, who has famously compared the virus to a “little flu,” has clashed with state and local authorities over their use of stay-at-home measures and business closures to contain it.

He argues that strategy is needlessly hurting the economy, in which the World Bank forecasts will have a record eight-percent recession this year.

Read Next
Massive coral bleaching hits Batangas waters
EDITORS' PICK
Look Through: The fate of impounded stray dogs
House energy committee chair Arroyo bats for cheap electricity
What to watch out for when selecting a video surveillance solution
23,000 cops to be deployed nationwide for school reopening
Unleash the photographer in you this World Photography Day with vivo smartphones
DOH says COVID-19 cases plateauing, but public shouldn’t be ‘complacent’
MOST READ
Sharon Cuneta asks for prayers for friend in ICU who suffered silent stroke
Light therapy could be the answer to your sleep problems
Korina Sanchez reunites with former ABS-CBN co-anchors Julius Babao, Cheryl Cosim
PBA: San Miguel ousts Meralco to arrange finals duel vs TNT
Don't miss out on the latest news and information.