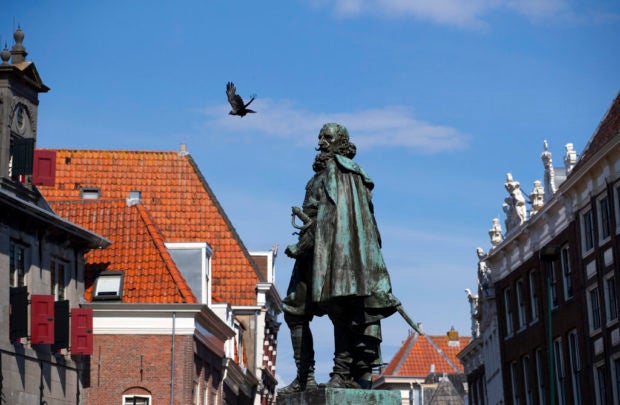 A statue of the Dutch Golden Age trader and brutal colonialist Jan Pieterszoon Coen stands tall above a square in his hometown of Hoorn, north of Amsterdam, Netherlands, Friday, June 19, 2020.  (AP)

HOORN, Netherlands — The 17th century has gone down in Dutch history as the Golden Age, when unprecedented trading wealth helped fund the likes of artists Rembrandt van Rijn and Johannes Vermeer.

But the grim flip side of the prosperity — fortunes generated by seafaring traders, slavery and iron-fisted colonial rulers — is being brought into sharp focus amid global protests sparked by the killing of George Floyd.

Activists spurred by the Black Lives Matter protests in the United States are seeking to shed more light on the Dutch colonial past and tackle what they call ingrained racism and discrimination in the Netherlands, a nation that was once known as a beacon of tolerance.

The latest target of activists is a statue of a top officer of the Dutch East India Company who in the 17th century founded the city that is now Indonesia’s capital, Jakarta.

About 500 protesters gathered Friday evening in the town of Hoorn, north of Amsterdam, calling for the removal of the statue of Jan Pieterszoon Coen. A counter-demonstration supporting the statue drew far fewer participants.

Honored since the late 19th century as a colonial ruler and leading light in the Dutch East India Company trading powerhouse, Coen also is reviled as the “butcher of Banda” for a bloody 1621 assault on a group of islands in order to secure a monopoly on spices grown there. Thousands of island inhabitants were killed.

“Everyone here today gives a voice to the victims,” one of the protest organizers, Romy Rondeltap told the crowd. “A mass murderer does not deserve a statue.”

As the demonstration in a parking lot about a kilometer (half mile) from the statue ended, a group of protesters tried to head toward the statue and were confronted by police officers, police spokesman Menno Hartenberg said. At least one protester was detained and officers cleared the square where the statue stands as a precaution, he said.

Karwan Fatah-Black, a historian and lecturer at Leiden University, thinks the many protests in the Netherlands in the wake of Floyd’s death at the hands of Minneapolis police officers on May 25 are a response to the voices of migrants and descendants of people from former Dutch colonies being marginalized in Dutch society.

“Their concerns were always brushed aside for a very long time,” Fatah-Black said. Among the concerns he listed: Racial profiling by police and tax authorities, discrimination in workplaces, schools and on the housing rental market, and cases of police brutality.

The demonstration, in Coen’s hometown, followed protests across the Netherlands in recent weeks against police violence and racism, including two in Amsterdam that drew thousands of participants. A statue of Piet Hein, a colonial era mariner widely regarded as a hero, was daubed with red paint and the word “killer” last week.

“That’s where it ties in with the post-colonial communities in the Netherlands, because they see that they are not presented in the public, political sphere, … so they demand for correction of that,” Raben said.

But there are still plenty of people in the Netherlands who reject such a reevaluation of the past.

Populist lawmaker Thierry Baudet recently laid a bunch of roses at the base of the Coen statue in Hoorn, saying in a video posted on Twitter that he was honoring the Dutch identity and history. The fast-growing Forum for Democracy party that Baudet leads is using the protests as a rallying cry to recruit new members.

In the Netherlands, it is not only statues that have ties to slavery and oppression. Across the country, streets bear the names of Golden Age figures. The wealth of 17th-century traders funded stately mansions that still stand on Amsterdam’s canals.

The horse-drawn Golden Carriage, currently undergoing a lengthy restoration but traditionally used to carry the Dutch monarch to the state opening of Parliament each year, also is getting a reassessment. One of its panels is decorated with a painting depicting Africans and Asians carrying goods to present to their colonial masters.

In recent years, much of the polarized Dutch debate about race has revolved around the divisive children’s character Black Pete, who is often portrayed by white people wearing blackface makeup at celebrations each December marking Sinterklaas, a Dutch celebration of St. Nicholas.

“I think people are waking up and I hope, I really hope, it’s not like a hype and that everybody who is standing at a Black Lives Matter protest will show up also in November when we’re protesting Black Pete and will show up every time when we are addressing the issue of racism in this country,” she said.