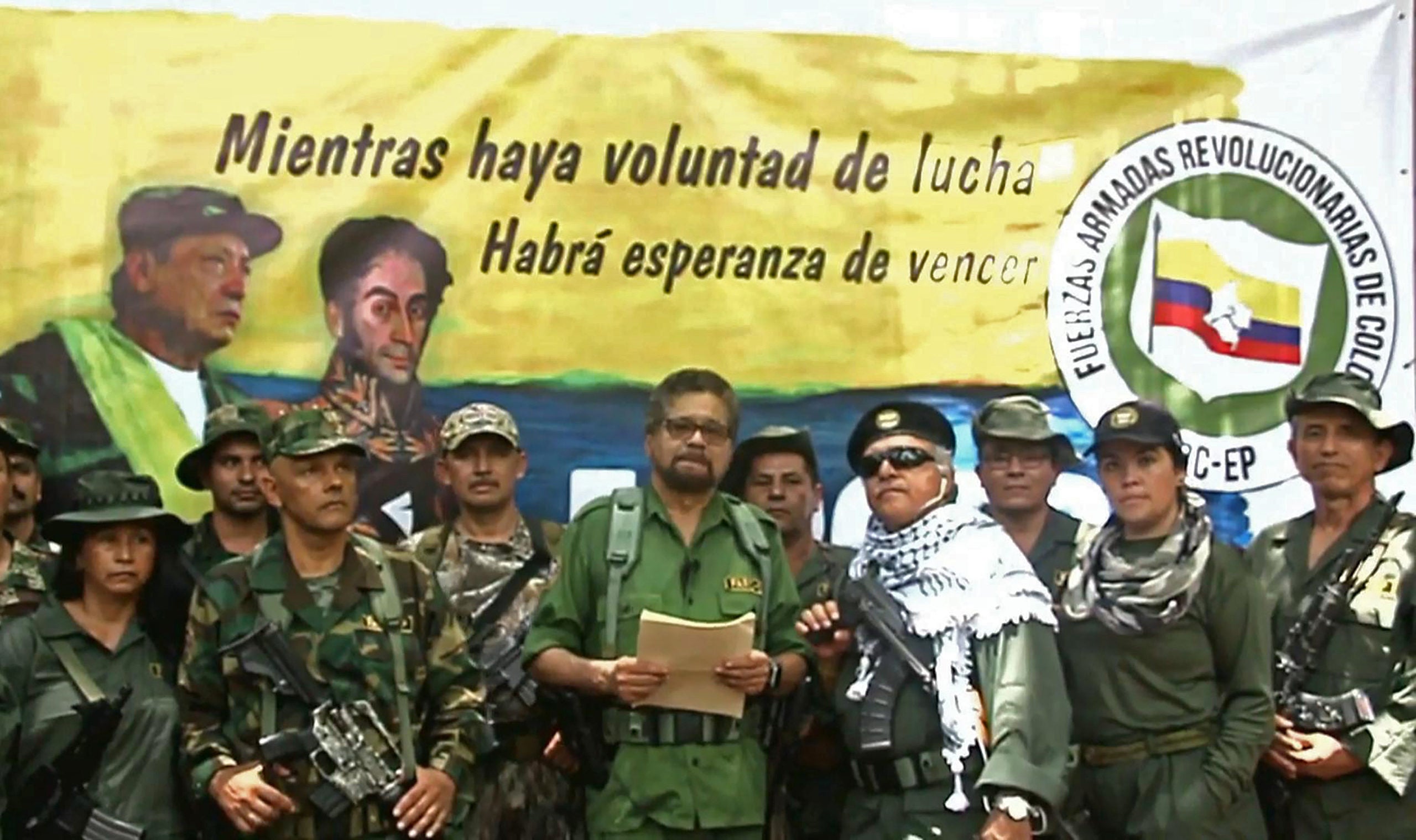 (FILES) This TV grab taken from youtube and released on August 29, 2019, shows former senior commander Ivan Marquez (C) and fugitive rebel colleague, Jesus Santrich (wearing sunglass), of the dissolved FARC rebel army group in Colombia, on an undisclosed location of Colombia announcing that they are taking up arms again along with other guerrillas who have distanced themselves from a peace accord signed with the government in 2016. – The US on June 18, 2020, offered rewards of up to $10 million for the capture of two dissidents from Colombia’s former FARC rebels who announced a return to arms. The State Department said it would offer $10 million for information leading to the arrest and conviction of either Ivan Marquez or Jesus Santrich. (Photo by – / various sources / AFP)

BOGOTA, Colombia — Colombia’s army said Thursday it had freed a Swiss and a Brazilian kidnapped three months ago by suspected guerrillas.

Daniel Max Guggenheim and Jose Ivan Albuquerque were rescued during a military operation in the southwestern Cauca department, one of the areas most blighted by drug-trafficking violence.

The two men fell into the hands of the “Dagoberto Ramos Mobile Column” in mid-March, the army’s anti-kidnapping unit said in a statement.

The guerrillas are among around 2,300 armed dissidents from the former rebel FARC movement who refused to lay down arms during the historic 2016 peace accord that ended a 50-year struggle by the Marxist group.

The unit said it also captured one of the suspected kidnappers, who was guarding the pair when they were rescued.

Guggenheim, who is retired, said in a press conference that he and Albuquerque were kidnapped while visiting the Pacific coast as tourists.

As they were returning to the capital Bogota, they were abducted at gunpoint from a restaurant.

“He told us we’d reached the cemetery,” said Guggenheim about their armed assailant.

The kidnappers had originally asked Guggenheim’s family for a ransom equivalent to $266,000 before lowering their demands to $1,300.

“They called my daughter once and told her about a sum,” he said, without specifying whether the money had ever been paid. “They called three times.”

In statements, the Swiss and Brazilian governments thanked Colombian authorities for their cooperation and congratulated the armed forces on their success.

Since breaking away from the FARC, disparate dissident groups have continued armed resistance to the government, financing themselves through drug-trafficking and illegal mining.