S. Korean man sets self on fire with baby in arms 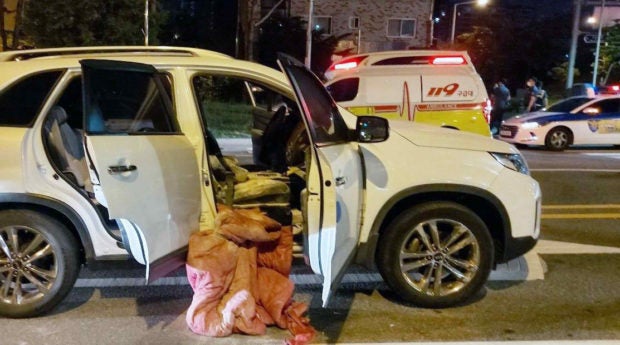 SEOUL — A man set himself on fire in a suicide attempt while holding his baby in his arms, but the police rescued the child unharmed, local authorities said Thursday.

The man suffered second-degree burns on much of his upper body and is now being treated at a nearby hospital.

According to police and local media reports, the incident occurred at around 3:30 a.m. in Cheongju, North Chungcheong Province.

The baby’s mother called police to report domestic violence at 2:41 a.m. When police officials arrived, the man was outside the house holding a 2-liter bottle containing flammable material and threatened to kill himself. Despite efforts to calm him down, he drove off with the baby.

Four police vehicles chased him and finally found his car. Police officers managed to rescue the baby shortly after the man set the car and himself ablaze. The fire was extinguished.

Police said they are planning to request an arrest warrant, but further investigation hinges on the man’s recovery.

In the Philippines, people feeling they need help may call the National Center for Mental Health’s (NCMH) hotline numbers: 0917899-USAP (8727) or 989-USAP.