Infections in Beijing ‘likely’ to increase 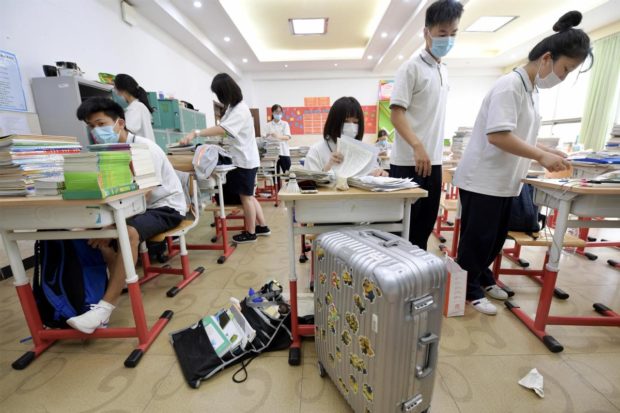 Seniors at a Beijing high school pack their study materials on Wednesday before leaving campus. All schools in the city have suspended on-campus study after a new COVID-19 outbreak in the past week. WEI XIAOHAO/China Daily/Asia News Network

BEIJING — Beijing has stepped up overall measures－including canceling flights, suspending classes and expanding nucleic acid testing－to contain a new cluster of local COVID-19 infections. The move comes as the number of confirmed cases in the city is expected to rise in the coming days.

The Chinese capital reported 31 new COVID-19 cases on Tuesday, bringing the total number of confirmed cases to 137 since the first new local case was reported on June 11. All are related to the Xinfadi wholesale market in southern Beijing’s Fengtai district.

“Given that Xinfadi was the largest produce market in the city, with large flows of people, and the outbreak was still in the early stage, it’s likely that the number of new COVID-19 patients will continue to rise for a certain period,” Pang Xinghuo, deputy head of the Beijing Center for Disease Control and Prevention, said at a news conference on Wednesday.

The cluster of local infections is believed to be associated with human-to-human transmission and contaminated objects, she said.

Among the 31 new cases reported on Tuesday, the youngest patient is 8 years old and the oldest is 70. The average age is 43, with 19 males and 12 females, Pang said.

After Beijing announced on Tuesday night it would raise its public health emergency response from the third－to the second-highest level of its four-tier system, a group of strengthened measures was launched to keep infections from spreading.

By Wednesday, four provinces－Hebei, Sichuan, Liaoning and Zhejiang－had reported patients with confirmed illness related to the cases that had appeared in Beijing since Saturday. Many cities in China have introduced a range of quarantine measures for travelers from Beijing.

In order to make nucleic acid testing available to more people, 98 hospitals and medical institutions now will provide the service to residents, but authorities suggest reservations be made to avoid a concentration of people and the potential for infection from crowds.