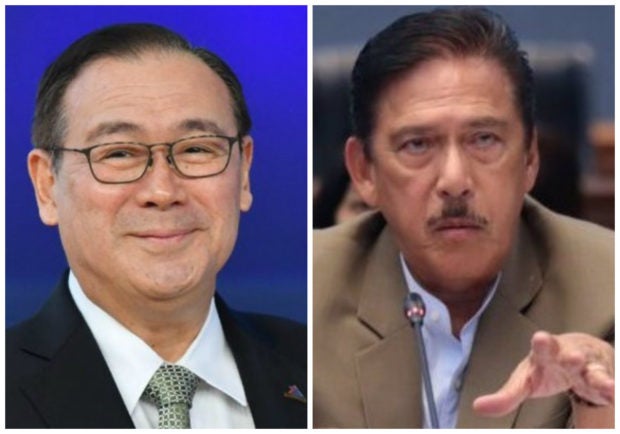 MANILA, Philippines — Foreign Affairs Secretary Teodoro Locsin Jr. wants libel to be decriminalized, but Senate President Vicente Sotto III pointed out that it would not be that easy.

Sotto further argued that “bearing false witness against thy neighbor” is forbidden under the Ten Commandments.

Under the Revised Penal Code, libel is punishable by imprisonment of from six months to six years.

Meanwhile, the Cybercrime Prevention Act of 2012, or Republic Act No. 10175, punishes the crime of libel committed through the use of the Internet.

In response to Locsin’s tweet, Sotto said: “I wish it were that easy. Grandpa was the author of the 1946 Press Freedom Law. Unfortunately, Lying (libel) is found in the Ten Commandments.”

I wish it were that easy. Grandpa was the author of the 1946 Press Freedom Law. Unfortunately, Lying (libel) is found in the Ten Commandments. https://t.co/LtGwb8P59m

Sotto was referring to Republic Act No. 53, more commonly known as the Sotto Law, which protects journalists from being compelled to name their sources.

Expounding on his reservations on decriminalizing libel, the Senate leader told reporters in a message that the Ten Commandments “cannot be amended.”

“Bearing false witness against thy neighbor is a higher law from God than any other law of man,” Sotto said.

“Lying in court is perjury. Lying in Congressional investigations can lead to detention. Otherwise, what will happen? Even a bouncing check is a kind of lying that can mean imprisonment. Do we decriminalize all these?” he added.

On the day Ressa and Santos were convicted, Sotto tweeted: Exodus 20:16 The 9th Commandment Of the Great Architect Of The Universe!

Exodus 20:16
The 9th Commandment Of the Great Architect Of The Universe!

Exodus 20:16 is a verse in the bible which states: “You shall not give false testimony against your neighbor.”

The subject of the cyber libel case against Ressa and Santos was a 2012 article written by latter claiming that businessman Wilfredo Keng lent his sports utility vehicle to then Chief Justice Renato Corona.

The same article also cited an intelligence report that said Keng had been under surveillance by the National Security Council for alleged involvement in human trafficking and drug smuggling.

Keng filed the cyber libel complaint in 2017 or five years after the article was first posted and three years after it was supposedly re-posted after a typographical error was corrected.

Even before Ressa and Santos’ conviction, journalists and media groups have been calling for the decriminalization of libel for decades.

The National Union of Journalists of the Philippines previously said the “antediluvian libel law” and its threat of jail time has been a weapon of choice against journalists who seek to hold public officials accountable.

“We address our call not only to the community of independent Filipino journalists but to each and every Filipino, regardless of persuasion, who values their freedom of expression and their right to know,” NUJP said in an earlier statement.